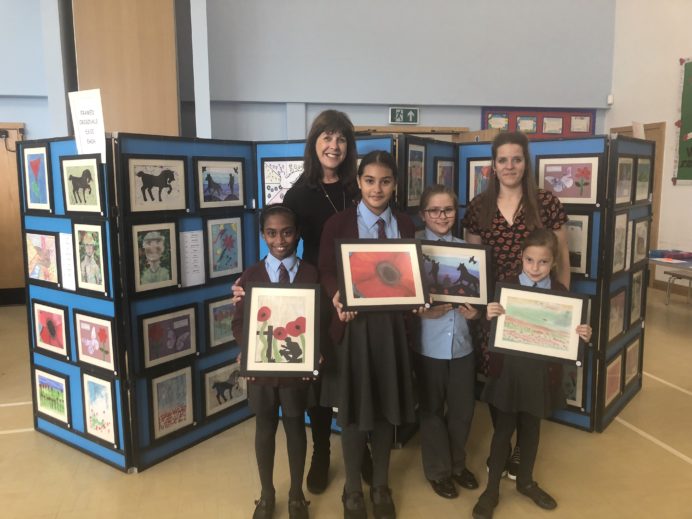 A school in Perivale held two weeks of activities themed around the First World War to commemorate the centenary anniversary of the 1918 armistice.

English, reading, history, art, RE and maths lessons all had a First World War focus at St John Fisher Catholic Primary School, in Sarsfield Road, in the fortnight leading up to Remembrance Day. And, at the end of the fortnight, an exhibition was set up in the school hall to showcase the pupils’ work, which children and parents were able to visit.

Christina Urbanski, the school’s Year 4 head of humanities, said: “I think it’s important for children to understand the importance of these events. Art can be a moving way of the children remembering, as well as providing their own take, on a time that was so significant and sad in our history. The children really enjoy art and I think it’s important for them to be able to express themselves through this medium. I also believe pictures speak a thousand words and there is no time better to implement pictures than when reflecting on the horrors and heroism of the brave men and women who laid down their lives for future generations. We had a scribe called Matt Kemp from Scriberia and the children gave him ideas whilst he illustrated their ideas, which helped the children to visualise their thoughts on paper.

‘The children loved it. They learnt so much’

“We have a very large EAL (English as an additional language) school and wanted children to know what our country had to go through and to understand this was one of the most important wars in modern history and it was the 100-year centenary celebration. We also wanted them to be proud of what our soldiers did and still do today for this country. In addition, we wanted them to know the impact of women on the war and to emphasise their role. Also, children nowadays seem to spend a lot of time on devices like tablets or phones and we wanted to open their eyes to the many different other resources they could be missing out on.

“The children loved it. They learnt so much and have said what an insightful two weeks it was. There was a whole host of activities, getting into character: From writing an imagined letter back home from the trenches and diary entries; to reporting news from the front line. There were also two workshops exploring the experiences of a woman from the war and a soldier.

“Other work compared soldiers then and now, looked at animals in the war, and investigated the trenches – including the pupils creating their own Lego trench. We discussed peace in RE and in English lessons we focused on war poetry and songs and books relating to the war.”

What the children said

Comments from the pupils after the two weeks of activities, included: