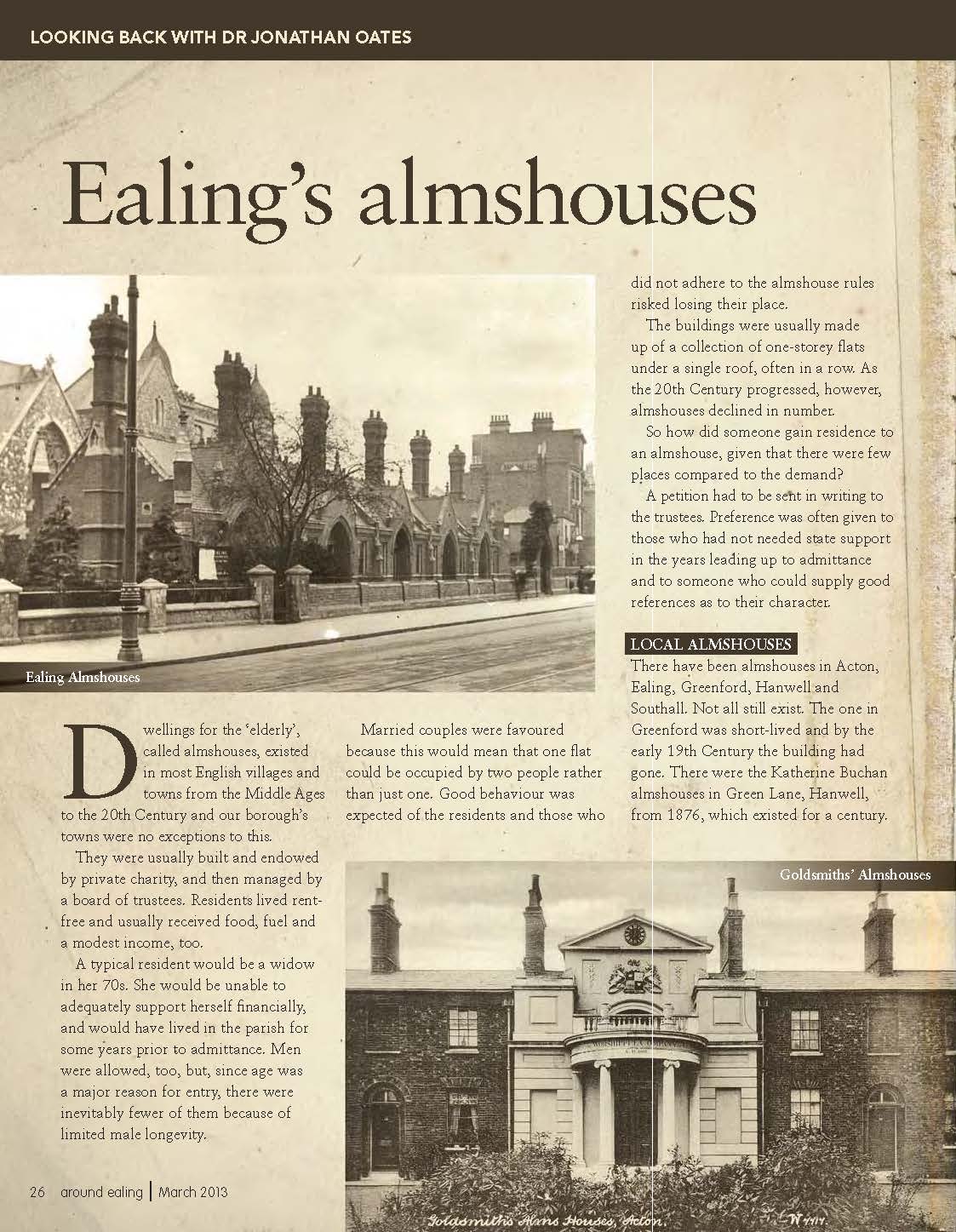 Dwellings for the ‘elderly’, called almshouses, existed in most English villages and towns from the Middle Ages to the 20th Century and our borough’s towns were no exceptions to this.

They were usually built and endowed by private charity, and then managed by a board of trustees. Residents lived rent-free and usually received food, fuel and a modest income, too.

A typical resident would be a widow in her 70s. She would be unable to adequately support herself financially, and would have lived in the parish for some years prior to admittance. Men were allowed, too, but, since age was a major reason for entry, there were inevitably fewer of them because of limited male longevity.

Married couples were favoured because this would mean that one flat could be occupied by two people rather than just one. Good behaviour was expected of the residents and those who did not adhere to the almshouse rules risked losing their place.

The buildings were usually made up of a collection of one-storey flats under a single roof, often in a row. As the 20th Century progressed, however, almshouses declined in number.

So how did someone gain residence to an almshouse, given that there were few places compared to the demand?

A petition had to be sent in writing to the trustees. Preference was often given to those who had not needed state support in the years leading up to admittance and to someone who could supply good references as to their character.

There have been almshouses in Acton, Ealing, Greenford, Hanwell and Southall. Not all still exist. The one in Greenford was short-lived and by the early 19th Century the building had gone. There were the Katherine Buchan almshouses in Green Lane, Hanwell, from 1876, which existed for a century.

From the late 17th Century, Acton’s almshouses were in the Steyne, where they existed until the 1960s. From 1811 there were also the Goldsmiths’ Almshouses, just north of the Park. These were for the use of goldsmiths and their families. In more recent times these have become converted for use as luxury flats.

Almshouses do survive in Ealing and Southall. From the late 18th Century, Ealing’s almshouses were located in the Mall, but were moved to a location near to St Mary’s Church in 1902.

There are also the Norwood almshouses in Frogmore Green. In 1897 William Deloitte had
almshouses built in Mount Pleasant to mark Queen Victoria’s Diamond Jubilee.

Over the years, almshouses have adapted to meet current needs. In 1872 Ealing’s almshouses were rebuilt because of the poor state of repair that neglect had resulted in. Southall’s almshouses were altered in 1962 to make them more suitable for modern use.

In fact, even the very name ‘almshouse’ has often been altered, so the name St Mary’s Church Homes was deemed more appropriate than Ealing Almshouses. Deloitte’s almshouses, meanwhile, are now known as ‘sheltered housing’.

This originally appeared in Around Ealing March 2013