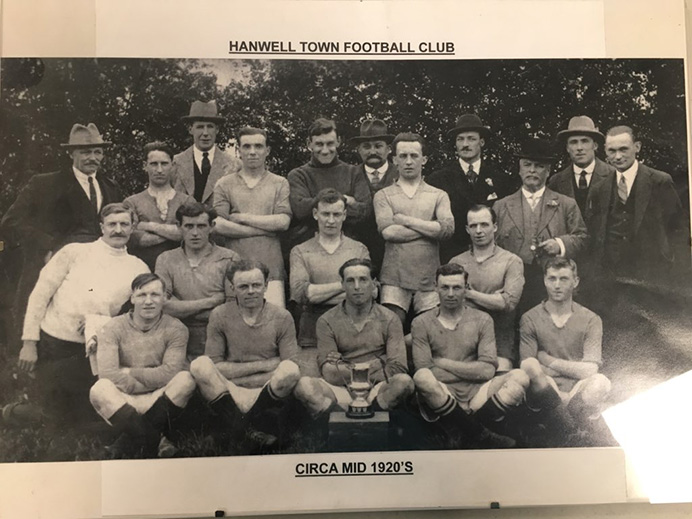 Hanwell Town Football Club will celebrate its centenary in 2020 and the club historian, Colm Hickey, gives an account of the history of the club and football in the town: From self-styled lunatics to community stalwarts.

The first recorded account of football in Hanwell was in 1867 when an advertisement in the Middlesex County Times proposed the formation of a football club.

In 1873, a correspondent noted that at an Easter festival at the ‘Hanwell Lunatic Asylum… happy, inmates were… playing cricket, football, and other games.’ Eleven years later, in 1884, four young men contributed 1s 10½d each to purchase a football and formed Hanwell Football Club.

From 1884-1893 the club played at Church Fields and used the Viaduct pub as its clubhouse.

Lunatics, an earl and financial woes

Because of the proximity of its ground to the Middlesex County Asylum, the club was given the nickname of ‘the lunatics’. In 1893 Hanwell entered the West Middlesex League and, by 1907, was playing at its own ground in Park Farm now Elthorne Park. Despite having Sir Montague Sharpe as its president and the Earl of Jersey as its patron, the ‘lunatics’ struggled financially and folded in 1912.

However, in 1920 a new club, Hanwell Town, was formed and, although taking its inspiration from the original Hanwell FC, playing in the same colours of pink and black, and having some former players, committee man and supporters, it is this club that celebrates its centenary this season.

The new club struggled with exactly the same problems as the old – lack of finance – and it walked a perilous tightrope, finally ‘falling off’ in 1927 when for the second time the club folded.

From then, Hanwell was without a major football club but, after the Second World War, Hanwell Town Sports and Social club was formed and the club grew, almost completely because of the efforts of one man, Ron Walker, who was its secretary from 1948 until 1998. It was from Walker that the apocryphal story began that the club was founded by ‘Geordies’ working on the construction of the Great West Road in the 1920s. Nonetheless, no matter how true or false, the story stuck and the club began playing in the famous black and white stripes of Newcastle United and acquired the nickname of the ‘Geordies’ which it has retained to this day. The lunatics tag was well and truly gone.

From 1950 to 1970 the club played in the Harrow, Wembley and District League before joining the Middlesex league and finally achieving senior status in 1983 when it joined the Spartan League and is now in the South Central Division of the Isthmian League. The club has won a number of trophies including the London Senior Cup and the Middlesex Cup. It has produced two international footballers: LA Louch, who played for England Amateurs just before the First World War; and Martin Rowlands who went on to play more than 300 games for Brentford and Millwall and was capped five times by the Republic of Ireland.

Since 1920 the club has had three grounds: Park Farm on the Boston Road in Hanwell; Ealing Central Sports Ground on Horsenden Hill, and its present ground since 1981, the Powerday Stadium, which it obtained on a lease from Ealing Council.

Although the club paid a peppercorn rent at first, its finances were so stretched that it struggled to pay even that. However, the council was determined to give the club every assistance and Trevor Preston, the then head of the parks department, persuaded the club not to terminate its lease. The arrears were paid off and the club survived and has thrived since then. And the links to the council have continued – with the club becoming a voluntary partner with the council, running football sessions for the community at William Perkin High School.

Indeed, Hanwell Town has always prided itself on its community links and has always aimed to represent more than just the fortunes of the first team. From its origins as Hanwell FC in the 19th Century it regularly fielded four teams. By the 1980s this had been reduced to two, but the loss of adult teams has been more than compensated for by a thriving junior section firstly from 1964-1994, and then again, after a six-year break, from 2000. The club now has 25 teams: 16 teams aged U7 to U11 in the soccer combination and nine teams from U12 to U18 in the Harrow Youth League. Playing their matches at both the main ground and Popes field in Gunnersbury Lane, the youth section encourages participation (a game for everyone who wants one), and football excellence with teams playing competitive football in the Harrow Youth league with the aim of producing players for the first team. All of this helps community cohesion, encourages children to adopt healthy lifestyles, combats obesity and provides a fun, safe and supervised activity.

No account of the club’s history would be complete without mention of the chairman, Bob Fisher, who has been a member of the club for a remarkable 64 years; and the president Dave Iddiols, who has completed 42 years’ service.

The club is planning a centenary exhibition and would welcome any pictures or memorabilia that people may want to donate to the club. It is particularly keen to secure any pictures of Hanwell FC before 1920 and any photographs of its ground at Park Farm in Boston Road, Hanwell.

A number of events have been planned to celebrate the centenary, ranging from a celebrity football match and a five-a-side tournament, to a football heritage trail and a centenary dinner on Saturday, 14 December. Anyone wanting information about any of these events can find it on the club website or by contacting Bob Fisher, at bob.fisher@hanwelltfc.plus.com