Home > How the council spent your money 100 years ago 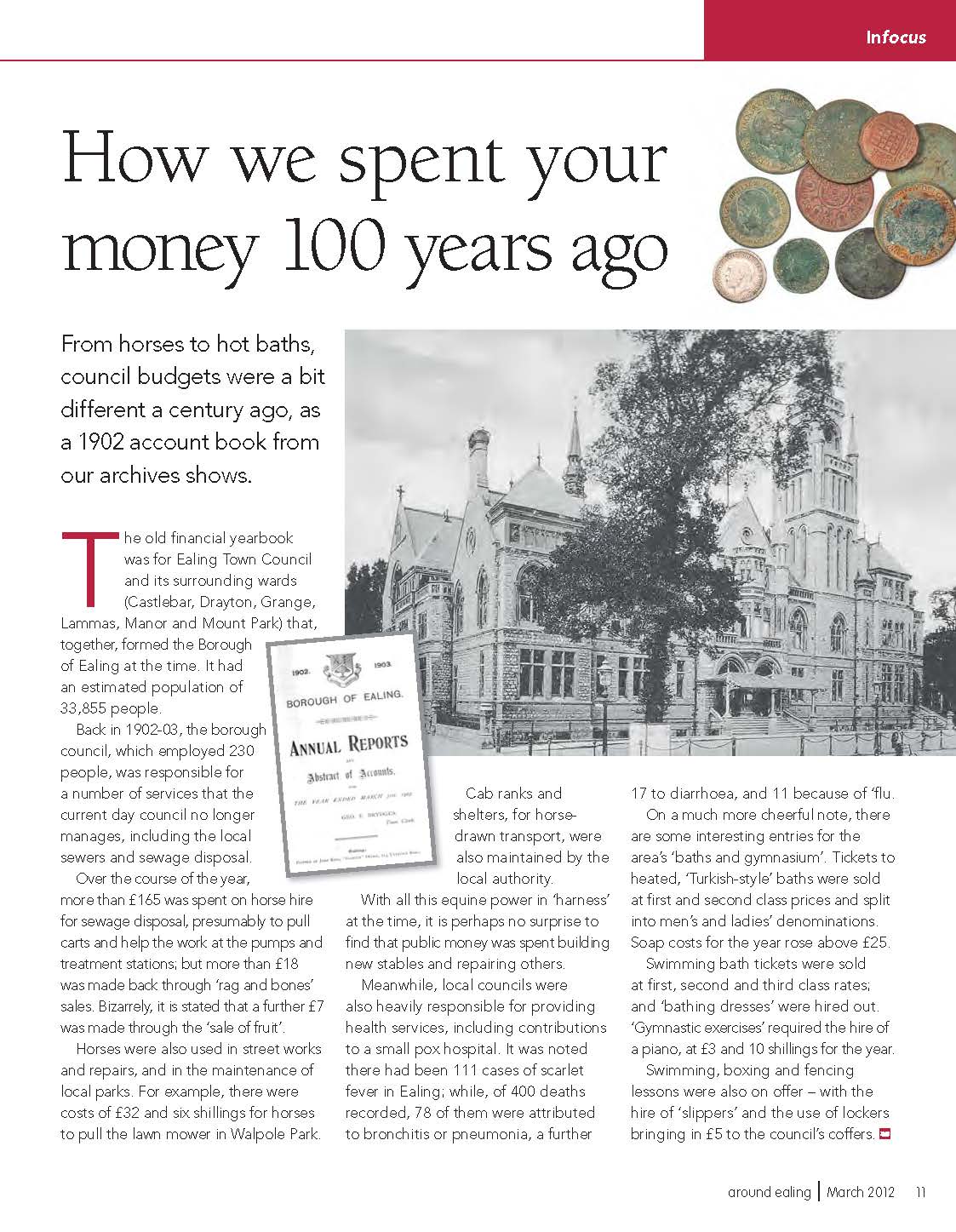 How the council spent your money 100 years ago

From horses to hot baths, council budgets were a bit different a century ago, as Richard Nadal discovered in a 1902 account book from the archives.

The old financial yearbook was for Ealing Town Council and its surrounding wards (Castlebar, Drayton, Grange, Lammas, Manor and Mount Park) together, formed the Borough of Ealing at the time. It had an estimated population of 33,855 people.

Back in 1902-03, the borough council, which employed 230 people, was responsible for a number of services that the current day council no longer manages, including the local sewers and sewage disposal.

Over the course of the year, more than £165 was spent on horse hire for sewage disposal, presumably to pull carts and help the work at the pumps and treatment stations; but more than £18 was made back through ‘rag and bones’ sales. Bizarrely, it is stated that a further £7 was made through the ‘sale of fruit’.

Horses were also used in street works and repairs, and in the maintenance of local parks. For example, there were costs of £32 and six shillings for horses to pull the lawn mower in Walpole Park. Cab ranks and shelters, for horse-drawn transport, were also maintained by the local authority. With all this equine power in ‘harness’ at the time, it is perhaps no surprise to find that public money was spent building new stables and repairing others.

Meanwhile, local councils were also heavily responsible for providing health services, including contributions to a small pox hospital. It was noted there had been 111 cases of scarlet fever in Ealing; while, of 400 deaths recorded, 78 of them were attributed to bronchitis or pneumonia, a further 17 to diarrhoea, and 11 because of ‘flu.

On a much more cheerful note, there are some interesting entries for the area’s ‘baths and gymnasium’. Tickets to heated, ‘Turkish-style’ baths were sold at first and second class prices and split into men’s and ladies’ denominations. Soap costs for the year rose above £25.

Swimming bath tickets were sold at first, second and third class rates; and ‘bathing dresses’ were hired out.

‘Gymnastic exercises’ required the hire of a piano, at £3 and 10 shillings for the year. Swimming, boxing and fencing lessons were also on offer – with the hire of ‘slippers’ and the use of lockers bringing in £5 to the council’s coffers.

This originally appeared in Around Ealing March 2012