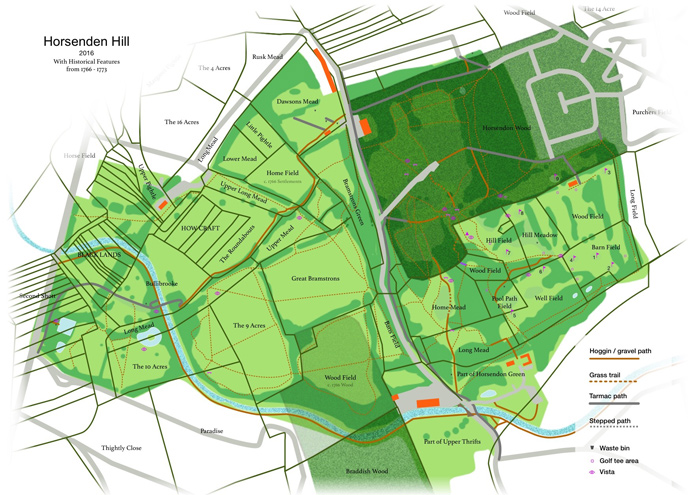 Horsenden Hill stands tall at the heart of our borough – our largest open space and a part of life, but it is also an ancient scheduled monument. Its past is one of spies, a Saxon legend, Dr Who, a huge reservoir and more besides. David Harvey helps us go on a tour.

In 1933 the hill and a total of 254 acres was bought for £98,000 by a partnership of the councils of Ealing (which paid 25%) and Wembley (12.5%) and Middlesex County Council (62.5%) with the purpose of making it public parkland. A 999-year lease was passed to Ealing and it has been managed by Ealing Council ever since.

You can view above a hybrid map with historical detail overlaid on a modern map (copyright of Nick Horgan, 2016).

The summit of the hill (which provides excellent views across London) was scheduled as an ancient monument in the late 1970s by English Heritage. This is because of evidence of an Iron Age (approximately 800BC- 43AD) settlement being discovered in archaeological excavations there.

Indeed, there is evidence of human activity on the hill for thousands of years. Historic England’s website confirms the Iron Age settlement covered a semi-circular area of more than 150 metres in diameter, with traces of possible defensive ditches and banks found. Pottery shards from medieval, Roman and Iron Age periods have all been recovered during digs, as has some Iron Age jewellery, a fragment of a Bronze Age blade (approximately 2,500BC-800BC) and a worked flint from the Neolithic period (approximately 4,000BC-2,500BC).

The items discovered by Wembley History Society by their excavations in the 1970s can be viewed (by appointment) with the archive section of Brent Libraries.

This historical treasure trove perhaps gives some credence to a legend around the naming of the hill which well-known local historian (and archaeologist) John Allen Brown recounted in his 1890 book The Chronicles of Greenford Parva. In it, he relates a legend he obtained from an 1845 work by John Farthing called Pictures of Perivale.

The legend tells the story of Horsa, a Saxon chief and son of the king of this part of Britain. He and his wife had one child, a beautiful daughter called Ealine (or Yillinge). The fame of her beauty and talents spread far and wide and many suitors came forward. Eventually, a neighbouring chief called Bren, who commanded a powerful tribe on the banks of the Thames, proved successful and married Ealine and took her away.

It was not a happy marriage and, in modern parlance, Bren/Brent was soon ‘playing away’. Ealine vowed her revenge and sent a pet starling she had trained to speak with a message to Horsa, who was enraged and sent his warriors to battle Bren. The two armies met and crossed at the ford in the river which has ever since been called Brentford; here Bren was slain and Horsa mortally wounded. Horsa was buried with great pomp on a large mound which then bore his name, Horsa Don (with don meaning hill fortress). This then corrupted to Horsingdon and then Horsenden, as we know it today.

That is not the extent of the links to modern place names because Ealine, it is said, retired with her mother to live in a nearby forest. Ealine apparently lived there to a grand old age before being buried on a spot which Farthing noted was named Ealine’s Haven in her honour. Not too much of a jump to get from there to the name Haven Green in Ealing, which was called Ealing’s Haven or Fling’s Haven on old maps.

SPIES IN THE COLD WAR

In 1985 the hill was mentioned in the trial of Michael Smith when he was accused and convicted of spying for the Russians, supplying details of the top secret Rapier missile system. Smith worked at a research centre in Wembley and used the hill and other locations as drop points to communicate with his Russian controllers. The trial was prominent at the time because it featured Oleg Gordievsky as a witness, a famous Russian KGB defector to the west.

As well as a Gruffalo trail for children and families to follow, beautiful parkland, nature trails and walks, the hill also boasts a golf course where you can play nine holes of golf or enjoy the new sport footgolf. You can find out more at www.londonpitchnputt.com and www.ealing.gov.uk/parks