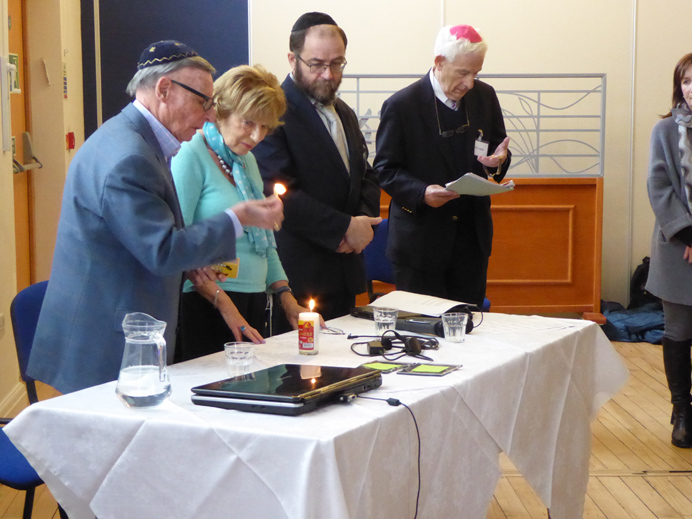 Each year, Holocaust Memorial Day is marked in the borough in late January, as it is around the world. Last week, as Melanie Silver reports, more than 60 local school pupils had the rare opportunity to hear moving testimony from two Holocaust survivors, Marianne and Peter Summerfield, refugees from Germany in 1939.

The high school students were from Villiers in Southall and Brentside in Hanwell and the event was hosted by Ealing Synagogue. The 13 and 14-year-olds heard how Marianne was a baby at the time, and she spoke movingly about the experiences of her family in Nazi Germany and the fate of those who were left behind. She also described the events and atmosphere in Germany that had led to the election of Hitler in 1933.

Her husband Peter was a small boy when he arrived with his family in Britain and he shared his memories of life under Nazi rule. These included the burning of synagogues on the infamous Kristallnacht and the subsequent round up of young men, his father among them, who were then taken to concentration camps.

Before Marianne and Peter shared their stories, the students participated in workshops where they learned about the events that took place between 1933 and 1945. Peter Summerfield lit a memorial candle in memory of the victims of the Holocaust then everyone stood for a minute’s silence. The session concluded with volunteer Helen Mars reading the poem ‘First they came’ by Pastor Martin Niemoller.

Peter Summerfield was born as an identical twin in Berlin in Germany in 1933, four months after Hitler came to power. By the time of his birth, his parents were already suffering from the restrictions placed on Jewish people by the Nazis and, from 1936, they tried to find a country which would accept the family as immigrants. Eventually they received permission to leave Germany after a distant uncle said he would be a guarantor with financial responsibility for the family.

In August 1939 the family was finally able to escape Berlin on the last train before war was declared. However, all their possessions and even their luggage were stolen, so they arrived in England in that month penniless and with only their hand-luggage.

Mr Summerfield later learned his grandmother and uncle had been murdered by the Nazi regime. After the war, he and his brother completed two years’ National Service in the British Army, including time on active service in Egypt.  He then went on to study Law at Oxford and qualified as a solicitor.

Mrs Summerfield was born in Breslau, Germany, which is now Wroclaw in Poland, in July 1938. Her parents were both dismissed from their careers in the legal profession because they were Jewish.

On Kristallnacht (9 November 1938), her father was arrested, along with thousands of other Jewish men, and sent to Buchenwald Concentration Camp. Her mother managed to persuade an official at the Gestapo Headquarters to find a missing letter that gave permission for him to live and work in England. After receiving this letter, her mother went straight to the camp with it and her father was released and immediately travelled to London. Mrs Summerfield and her mother were able to join him in February 1939.

After finishing school, Mrs Summerfield became a teacher and then went on to open a chain of nursery schools. She later opened a school teaching English as a foreign language.

The couple have been married for more than 40 years and have five children and 12 grandchildren.

Marianne and Peter said that it is now up to the students, as the future generation, not to stand by but to speak up and act against intolerance. They explained how the ‘power of words’, the theme of Holocaust Memorial Day, could have such a negative, devastating effect. They said: “Words can be used in a positive way, and you should be tolerant, understanding and respectful of each other. In this way, it is hoped that in the future we can live in a more peaceful society.”

IMPACT ON THE STUDENTS

From the postcards that the students wrote at the end of the event, it was obvious that students had learned a tremendous amount from the video and workshops and that they realised what a privilege it had been for them to hear first-hand accounts of life in Nazi Germany from the Summerfields.

The informative and highly successful session was part of a bigger programme of Northwood Holocaust Memorial Day events involving more than 3,000 pupils from more than 50 schools in the Greater London area. It aims to educate students about the Nazi atrocities, make a connection between the Holocaust and subsequent genocides and invite students to consider their personal responsibility to promote tolerance in today’s world.

Any school or college wishing to register their interest in taking part in a Holocaust Memorial Day event next year should email enquiries@northwoodhmd.org.uk or call 08456 448 006.

There are other stories of Holocaust survivors in this section: