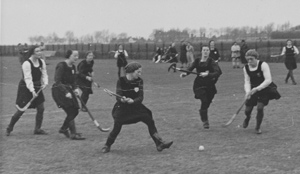 Very few of the girls and boys who play for the recently reformed Ealing Hockey Club have any idea of its history or the achievements of its past players and teams. But the club has a rich heritage, writes Clare Cogswell, the club’s secretary and a former player.

The club was reformed three years ago after various mergers had seen the old club fade out of existence by 2000 after almost 120 years of action. The modern-day girls may have replaced the floor-length skirts and scarlet waist belts with bright orange tops that they once wore, but the Ealing badge which adorns their kits brings with it the legacy of more than a century of great hockey players.

In October 1884 through the columns of the Middlesex County Times, Edward H Nash appealed to local gentlemen to join him in setting up a club in Ealing for, as he wrote: ‘playing the excellent game of hockey’. The editor of the day gave enthusiastic support to this proposal and wrote ‘that a hockey club will in a very short space of time be numbered amongst the permanent institutions in Ealing.’ The Ealing Hockey Club was thus formed.

In 1886/87 the men used a ground (which has long since disappeared) at what was then known as Ealing Dean, close to Mattock Lane and Northfields Avenue. They played in shirts of red and white halves.

The First Ladies hockey club was started by East Molesey in 1886, with Ealing ladies, it is believed, coming along soon after around 1888. So, by 1889 Ealing boasted both men’s and ladies’ clubs: The men at their new ground at Drayton Green near West Ealing and the ladies in Gunnersbury Lane.

The Ealing Guardian ran an article on the ladies club in 1898, stating that ‘the club dress is particularly smart and pretty, consisting of dark blue blouses, long scarlet tie and scarlet waist belts, black sailor hats with scarlet bands and for playing dark blue caps.’

A prominent member in the 1900s was Miss Dorothea Douglass, later Mrs Chambers, who was an even more renowned tennis player, winning the ladies’ final at Wimbledon on seven occasions. Another noted member was Olga Gray, honorary secretary between 1935-38 and an employee of M15, who effectively infiltrated various communist organisations, culminating in the Woolwich Arsenal spy case of 1938.

End for the men

However, by the 1911/12 season the men’s club had effectively met the beginning of its end. As land in Ealing was developed for housing, offices and shops, the team was increasingly struggling to find somewhere to play and eventually decided to merge with what had once been Willesden Hockey Club, at Richmond, becoming known as Mid-Surrey and Ealing. After the First World War (1914-18), however, the club restarted simply as Mid-Surrey without any Ealing members.

The ladies continued, however, with great success. The 1970s and 1980s were particularly successful era for the club, the first national title coming in 1986 with the National Indoor Championship followed in successive years by victories in the National Outdoor Championships in 1987, 1988 and 1989. Ealing went on to represent England in the European Clubs’ Championship in 1988, 1989 and 1990. A number of notable internationals played for Ealing in this era including Sheila Harding (nee Cornwallis), Katie Dodd, Mandy Nicholson (nee Langridge) and Joan Lewis. During this period, it became the first women’s club to celebrate 100 years and organised a whole series of events, tournaments and a centenary dinner.

Further success followed for the ladies at the start of the 1990s but by the end of the decade they were relegated to Division 2 and decided to merge with Hounslow Hockey Club and move to a new home at Dukes Meadow in Chiswick, bringing its separate existence to an end after more than a century.

Just 15 years later, the rejuvenated, joint Ealing Hockey Club has emerged as a successful junior club. Within three years of its inception by Total Hockey’s Jeff Moores, with the support of Ealing Council’s Active Ealing service, the club now boasts more than 200 members. It fields boys’ and girls’ teams in all age groups and welcomes players between the ages of five and 16 at St Benedict’s School’s playing fields where it plays and trains on Sundays. Full details can be found on the club’s website.

Clare would like to thank the National Hockey Museum, and the book: ‘1888-1988. Ealing LHC. One Hundred Years of Hockey in Ealing’ by Frances Nye.