Home > Guilty or not guilty? 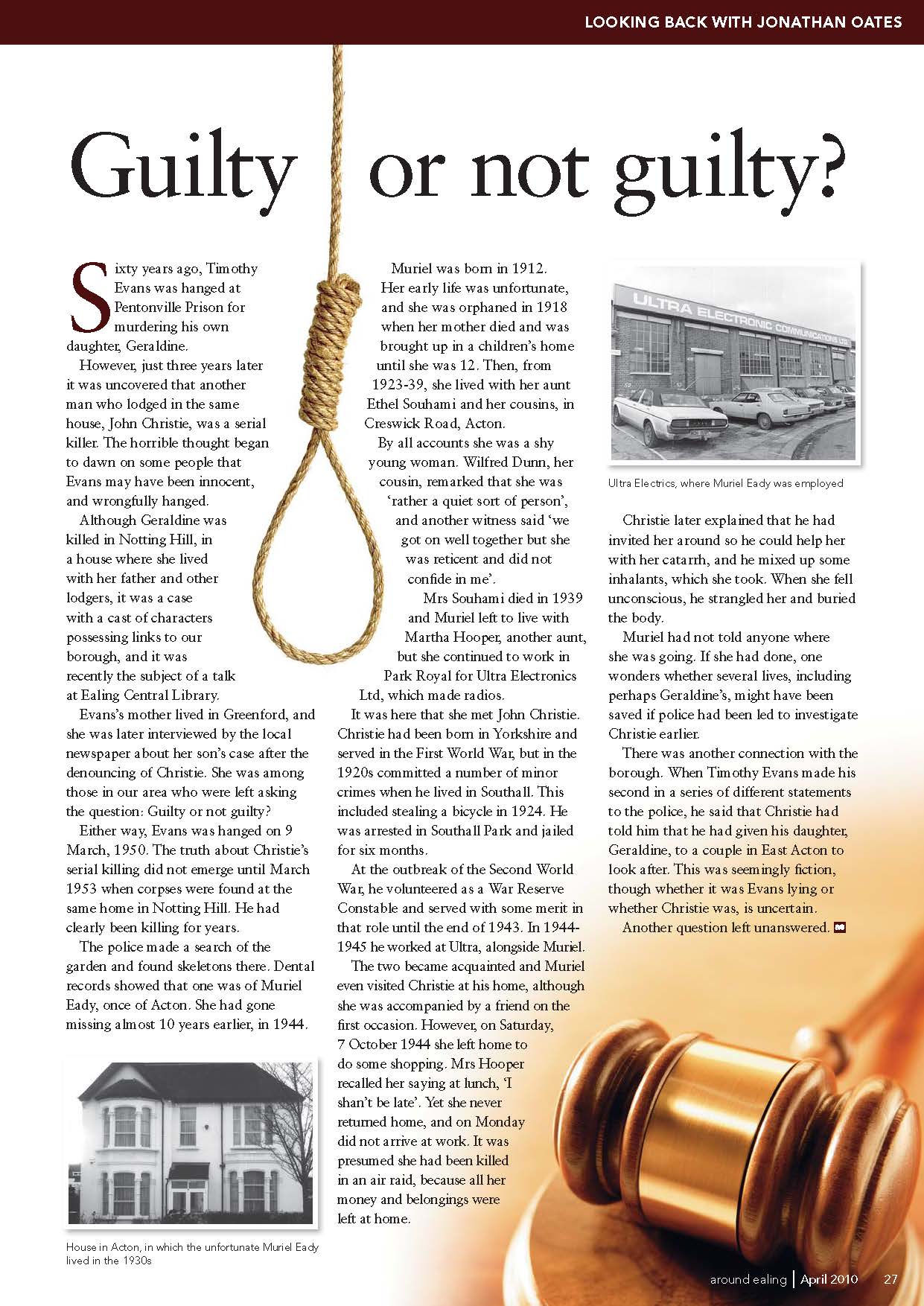 Guilty or not guilty?

Sixty years ago, Timothy Evans was hanged at Pentonville Prison for murdering his own daughter, Geraldine.

However, just three years later it was uncovered that another man who lodged in the same house, John Christie, was a serial killer. The horrible thought began to dawn on some people that Evans may have been innocent, and wrongfully hanged as guilty.

Although Geraldine was killed in Notting Hill, in a house where she lived with her father and other lodgers, it was a case with a cast of characters possessing links to our borough, and it was recently the subject of a talk at Ealing Central Library.

Evans’s mother lived in Greenford, and she was later interviewed by the local newspaper about her son’s case after the denouncing of Christie. She was among those in our area who were left asking the question: Guilty or not guilty?

Either way, Evans was hanged on 9 March, 1950. The truth about Christie’s serial killing did not emerge until March 1953 when corpses were found at the same home in Notting Hill. He had clearly been killing for years.

The police made a search of the garden and found skeletons there. Dental records showed that one was of Muriel Eady, once of Acton. She had gone missing almost 10 years earlier, in 1944.

Muriel was born in 1912. Her early life was unfortunate, and she was orphaned in 1918 when her mother died and was brought up in a children’s home until she was 12. Then, from 1923-39, she lived with her aunt Ethel Souhami, and her cousins, in Creswick Road, Acton.

By all accounts she was a shy, young woman. Wilfred Dunn, her cousin, remarked that she was ‘rather a quiet sort of person’, and another witness said ‘we got on well together but she was reticent and did not confide in me’.

Mrs Souhami died in 1939 and Muriel left to live with Martha Hooper, another aunt, but she continued to work in Park Royal for Ultra Electronics Ltd, which made radios. It was here that she met John Christie.

Christie had been born in Yorkshire and served in the First World War, but in the 1920s committed a number of minor crimes when he lived in Southall. This included stealing a bicycle in 1924. He was arrested in Southall Park and jailed for six months.

At the outbreak of the Second World War, he volunteered as a War Reserve Constable and served with some merit in that role until the end of 1943. In 1944-1945 he worked at Ultra, alongside Muriel.

The two became acquainted and Muriel even visited Christie at his home, although she was accompanied by a friend on the first occasion. However, on Saturday, 7 October 1944 she left home to do some shopping. Mrs Hooper recalled her saying at lunch, ‘I shan’t be late’. Yet she never returned home and, on Monday, did not arrive at work. It was presumed she had been killed in an air raid, because all her money and belongings were left at home.

Christie later explained that he had invited her around so he could help her with her catarrh, and he mixed up some inhalants, which she took. When she fell unconscious, he strangled her and buried the body.

Muriel had not told anyone where she was going. If she had done, one wonders whether several lives, including perhaps Geraldine’s, might have been saved if police had been led to investigate Christie earlier.

There was another connection with the borough. When Timothy Evans made his second in a series of different statements to the police, he said that Christie had told him that he had given his daughter, Geraldine, to a couple in East Acton to look after. This was seemingly fiction, though whether it was Evans lying or whether Christie was, is uncertain. Another question left unanswered.

This originally appeared in Around Ealing April 2010