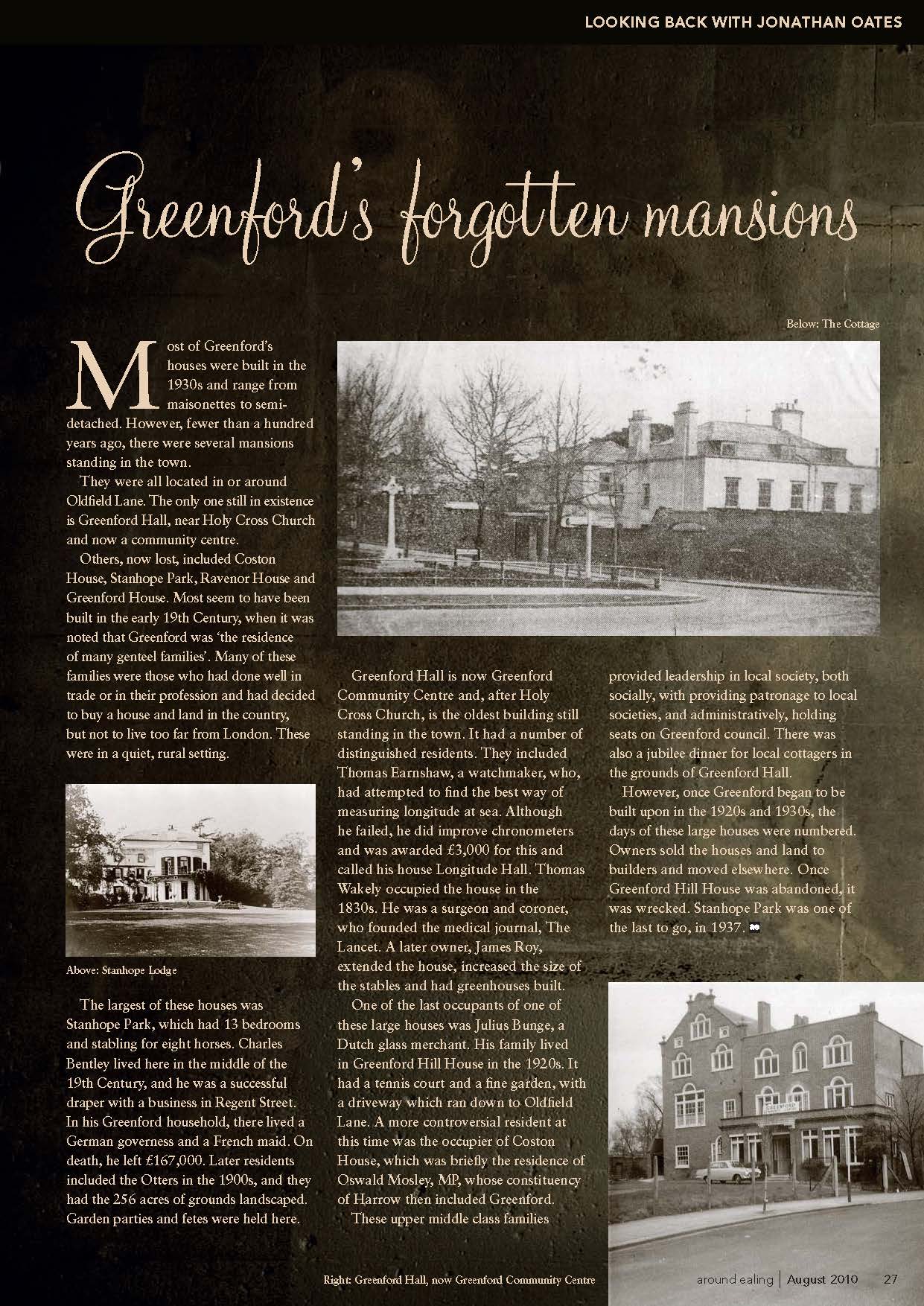 Most of Greenford’s houses were built in the 1930s and range from maisonettes to semi-detached. However, fewer than a hundred years ago, there were several mansions standing in the town.

They were all located in or around Oldfield Lane. The only one still in existence is Greenford Hall, near Holy Cross Church and now a community centre.

Others, now lost, included Coston House, Stanhope Park, Ravenor House and Greenford House. Most seem to have been built in the early 19th Century, when it was noted that Greenford was ‘the residence of many genteel families’. Many of these families were those who had done well in trade or in their profession and had decided to buy a house and land in the country, but not to live too far from London. These were in a quiet, rural setting.

The largest of these houses was Stanhope Park, which had 13 bedrooms and stabling for eight horses. Charles Bentley lived here in the middle of the 19th Century, and he was a successful draper with a business in Regent Street.

In his Greenford household, there lived a German governess and a French maid. On death, he left £167,000. Later residents included the Otters in the 1900s, and they had the 256 acres of grounds landscaped. Garden parties and fetes were held here.

Greenford Hall is now Greenford Community Centre and, after Holy Cross Church, is the oldest building still standing in the town. It had a number of distinguished residents. They included Thomas Earnshaw, a watchmaker, who had attempted to find the best way of measuring longitude at sea. Although he failed, he did improve chronometers and was awarded £3,000 for this and called his house Longitude Hall. Thomas Wakely occupied the house in the 1830s. He was a surgeon and coroner, who founded the medical journal, The Lancet. A later owner, James Roy, extended the house, increased the size of the stables and had greenhouses built.

One of the last occupants of one of these large houses was Julius Bunge, a Dutch glass merchant. His family lived in Greenford Hill House in the 1920s. It had a tennis court and a fine garden, with a driveway which ran down to Oldfield Lane. A more controversial resident at this time was the occupier of Coston House, which was briefly the residence of Oswald Mosley, MP, whose constituency of Harrow then included Greenford.

These upper middle class families provided leadership in local society, both socially, with providing patronage to local societies, and administratively, holding seats on Greenford council. There was also a jubilee dinner for local cottagers in the grounds of Greenford Hall.

However, once Greenford began to be built upon in the 1920s and 1930s, the days of these large houses were numbered.

Owners sold the houses and land to builders and moved elsewhere. Once Greenford Hill House was abandoned, it was wrecked. Stanhope Park was one of the last to go, in 1937.

This originally appeared in Around Ealing August 2010