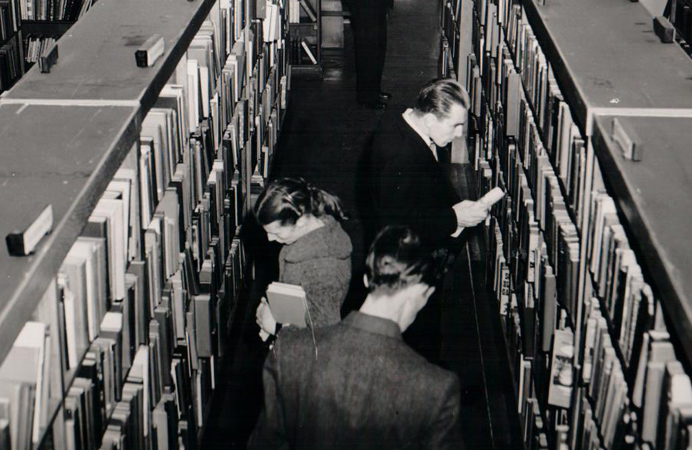 Week 51, the penultimate entry of our serialisation, is dominated by a school play, more concerns about finances and visits to the library (pictured), Acton shops and Woolworth’s in Ealing (where he claims never to have seen such a ‘dense’ crowd).

Woke at 12 to find a card from JM from Toulon; the Mater also had a letter. He is due back here on Thursday. Good luck.

After lunch went round to the School for the dress rehearsal of Richard II. I fear the speeches were a little ragged, but this may have been due to the uproar occasioned by the howling of a most terrific gale of wind, one of the worst I’ve ever known. Had tea at the school and returned here drenched at 7. After dinner called at Kidd’s, as I’d heard Thomasina was ill with earache. I believe she is improving.

Then on to the Aunts’, with whom I had a pleasant cup of tea and so home, meeting JD on route.

Things are rapidly returning to normal. Today is King George’ 41st birthday. He looks much younger.

M. Blum had just made a remarkably fine speech on Democracy and Europe and given a really friendly lead to Hitler, if the latter only had the wit to take it.

The Pope is said to be much better.

Rose only just in time for lunch, to learn that Mr Hayward has been on the ‘phone; wonder whether this is a good omen or a bad. He is somewhat associated in my mind withy the ghastly days of 1927 and the difficult ones of ’29 and ’30.

The Mater went over to Joan’s in the afternoon to see how the youngsters are keeping (incidentally they are improving) and I busied myself with routine until 4pm, when I went shopping in Acton.

Busy since dinner on routine work and, as soon as this is written, intend to put in several hours spring cleaning my room and rearranging the crowded gear with which it is stuffed.

Today old Buzz got a letter giving him a business interview in the City tomorrow, so I suppose he will soon be swallowed up in the maelstrom of the business world. I was a grown man when he was born, well do I remember that night, and now he is going out into the world, his youth and schooldays behind him. Ye gods.

Yesterday in Bradford Mr Eden, saying he would have no interference with the integrity of Spain. Will he back it up, I wonder?

Up at 10.30 (very reluctantly) and after breakfast put in 2 ½ hours on spring-cleaning my room; when it came to the bit last night I was too almighty weary to make a start.

After lunch to the bank, where I boldly overdrew the account for the household and then strolled up through Leicester Square and Piccadilly, gazing into the shops with a very heavy heart. This utter destitution Christmas after Christmas is both heart-rending and degrading.

After tea Buzz and I set off to MTs for the School Concert. This was really a splendid effort and the best I have ever attended; but the journeys there and back were dreadful, icy winds and wet roads and I have collected a very bad chest cold and an agonising spasm of rheumatism across the small of the back which is going to be very awkward unless I’m careful.

Had a letter from Daniel, who is still very doleful about the Abdication. The Mater is in great joy, anticipating J.M.’s arrival in the morning.

Awoke late this morning to find Ine already here from Brighton and the Aunts in too. We were all at lunch when at last the door bell rang and Jock had arrived. And what a changed Jock. Taller, stouter, burned brown and moustached, and with a voice completely changed, clipped and brusque. I believe the Mater was the only one of us who did not suffer from a complete strangeness with him.

The party went on more or less after tea, when I had to go round to Lancaster House for the play. This went off extremely well, the boy playing Richard II being especially good. Afterwards escorted home the Aunts, who attended the play, and arrived here to find Ine and the Doc gone but Kidd and Joan here. As JM had laid in a stock of drinkables, it was a sad and merry party. In fact I had some difficulty in persuading him to go to bed. We sat for a long talk discussing his life in Palestine, and my soul is revolted at such a land of foul crime, torture and horror. I wish he had not to go back.

Got to bed bone weary with lack of sleep and rheumatism.

Slept well and rose for lunch much refreshed, albeit the rheumatism gives nasty twinges occasionally. Busy in the afternoon and then went to the Library and the Aunts’, incidentally meeting JM in Ealing; quite like old times.

Then on to Lancaster House for the second night of Richard II. Thought it went even better, and stage work, lighting, etc. was particularly smart. Buzz and Fuzz were there. Was a member afterwards of the end of term staff party and greatly appreciated it. Did not leave until 12.40 and got in here just a few minutes before JM, who had been renewing some of his old Ealing acquaintances.

I fear the Mater and Pater are very weary and worn out with worry. Why in God’s name could things not have come a little right in this festive season?

Yesterday old Buzz finished his schooldays at MTs and now he is facing the hard world. Good luck to him.

Woke at 11.30 and partook of a long and crowded breakfast, with three brothers, a sister in law and two nieces. Did not find it a very peaceful meal.

Busy after lunch and after tea went to Ealing to airmail a letter for the Pater and visit Woolworths. Never remember so dense a crowd in there before. Met L.H. and his fiancée there. Busy after dinner and after clearing up the routine jobs and helping old Buzz who (incidentally has an awful cold poor chap) to write a business letter, went round to Kidd’s, where were that Gibson woman, JM and Howard. The party went merrily until about 12.30, when JM and I returned home, where I demonstrated ‘Yachting’ to him till he was fast asleep. I fancy however that beer may have been equally responsible with the ‘Yachting’. It is most queer how strange I feel with him, I can get hardly a glimpse of the old Jock.

This afternoon Buzz and Fuzz presented me with a most remarkable and splendid pipe; really extraordinarily decent of the youngsters…

Mater brought me breakfast at 11.30 and I dozed gently until lunch time. Busy with the Mater afterwards till Kidd and his family turned up to tea. Afterwards In went round to the Davies’ to join JM who had been having tea there and afterwards went down to Ealing Post Office to get away some (letters). On the way back JM asked me if there were any of his money left in the bank; so I had the unpleasant task of telling him it was balancing a heavy overdraft at the bank. Must try and get him some out somehow.
Busy all evening until 11 pm, when JM and JD came and wanted some ‘yachting’. I don’t think JM much approves of it.