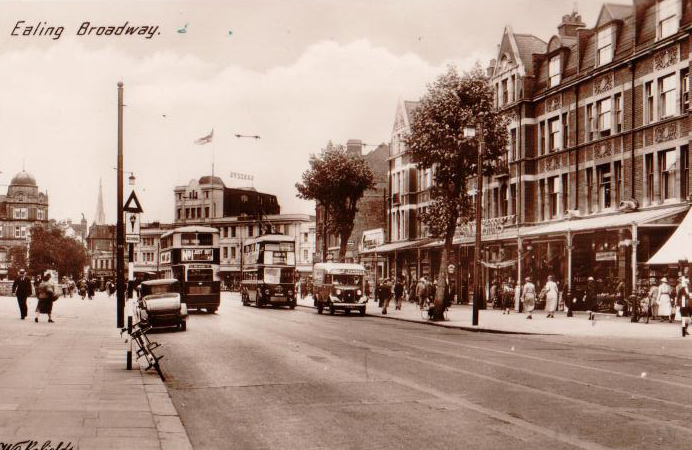 Week 40 begins with a welcome reprieve, with nobody from the Electricity Board coming around to cut off the supply. Summer was well and truly over as heavy rain required a clearing of the drain outside the house. He ends up in Woolworths (pictured in Ealing Broadway).

The Mater wakened me at lunch time with the news that there had been no one to cut off the light, and so we’re all right for the weekend.

Busy in the afternoon and later called on the Aunts and at the Library. Met Joan in Ealing. After dinner went over to No. 15 to shew Kidd the RNWAR papers and drink a cup of tea with them.

The great news today is that France, in careful arrangement with Great Britain and USA, has taken the franc off gold.

This is a notable step and should be of great benefit all round, especially if there was a reduction in tariffs; but of course that would be too much to hope for from our tariff maniacs here.

I fear the Spanish government is in a bad way, but there is always hope, and Catalonia is always there to make trouble for the rebels.

Rose late as usual and found Kidd had been here with Thomasina. In the afternoon there was a most terrific thunderstorm, with floods of rain, and Kidd and his family wisely stayed at home.

Wrote the ACR, Daniel and EB and have put in a lot of time today working out the new yachting course and the various moves.

I fear that both the Mater and Pater are very far from being fit yet, but perhaps this quiet day by the fire will help them a little.

Ine rang up this evening. They are all well down there, but poor old Margaret hasn’t quite decided yet whether she cares about school.

Buzz and I did not get any prize in that beastly newspaper competition; and, except for the first prize winning effort, which was brilliant, I thought the other prize efforts were very poor.

Yesterday the Rebels in the Alcazar were relieved after a nine week’s siege.

Usual late start, and lunch with the Mater and Pater. Nothing was said about the e/l this morning and in fact no one has come about it today. This afternoon Joan came with the two youngsters and I escorted them home after six. Paid a visit to the Library and called on the Aunts.

After dinner Buzz and I wrestled for an hour and a half trying to clear a drain, which made the finishing off of the household routine rather late. Then, foolishly, I settled down with a novel and didn’t get it finished until 4am, half an hour ago, so that my new yachting course does not advance much.

Up late as usual and found a letter from Daniel, saying he might be calling here on Sunday, en route home from Wolverhampton.

Busy in the afternoon and after tea to Ealing to airmail a letter to Jock from the Mater.

After dinner listened in to a broadcast of the election of a new Lord Mayor. Busy on the new yachting course.

Today died Admiral Simms, the C in C of the American Naval Forces in European waters during the War. Rather a fine old fellow.

The competitors left Portsmouth for the Great Air Race to Johannesburg.

I see the Spanish rebel cruiser Gervera has sunk a Government destroyer in the Straits of Gibraltar.

Worked until 6.30 am on the new course and I am glad to say it is pretty good.

Rose at lunch time and thereafter was fairly busy. The Mater went out, largely I suspect to calm her nerves, which this place is steadily fraying. Have worked all evening on the course and hope it will be useable tomorrow evening.

I see that blighter Franco has been proclaimed Head of the Spanish Army.

Captain Halse, leading and nearly home in the African Air Race, had the misfortune to crash; very hard luck.

Worked all night on the new course and got to bed at 7 am. Up for lunch and then to the bank. Then to Ealing and finally to Acton to pay the interest on that damned machine.

Home, and worked so hard to finish the course, which I did; and really it is a very fine one.

Stanley came to dinner and afterwards Kidd, Eddie and E.H. We sailed two matches on the new course and under the new rules and I think they will be very successful. To Horn Lane as usual.

C.W.A. Scott won the Johannesburg Air race in dramatic fashion today, in the time of 53 hours from Portsmouth. Some going. Two fellows were killed.
Today in the picture papers is a picture of Basil Fehr’s wedding at Chislehurst.

Today the Queen left Buckingham Palace after 25 years residence there, for Marlborough House. How cruel life can be, with its inevitable sequences.

Late start again, and then proceeded to sit with the papers over breakfast-cum-lunch until nearly four o’clock. After tea went down to Woolworths and the Library and called at Kidd’s for a few minutes on the way home.

The Aunts were over to dinner and I took them home at 10.30 returning here at 11.30. Have read very peacefully at the drawing room fire since.

I’m afraid I’m deteriorating these days, slack, nervy and with no purpose or concentration, and sick and weary of everything. If there were anything to do or be done I’d do it immediately, but on every side there is just a blank wall of total lack of opportunity to do a single thing. That Fehr wedding somehow seems to rub the whole mess in a bit more bitterly. It is just eight years, eight whole dreadful years, since Jeanette and I started those great times at Dymchurch; the only thing is that we are all alive, but that is the only thing to be said. Eight years of frustration and stagnation.