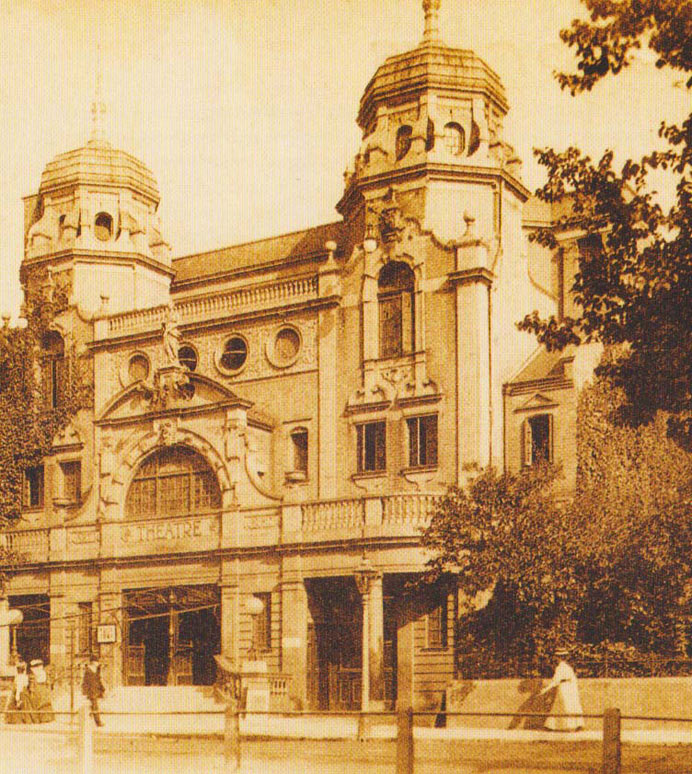 Goodlet ends week 39 by taking in some ‘infernal tosh’ at the Richmond Theatre (pictured) and facing up to the prospect of the family’s electricity being cut off, as they struggle to pay the bills. Shopping in Ealing is a distraction from a torturous decision whether or not to join the Admiralty to serve (although you wonder how serious he is about it) and, meanwhile, there is talk of war between Japan and China.

Was still up late enough to have breakfast with the Mater and the Boys. Thereafter went to bed and slept extremely peacefully until lunch time.

Was busy typewriting for the Pater until 6pm, when I went down to Ealing to the Library, and to Tann’s.

I fear I have just hung about since dinner, and it is now 6.30 am. However, I had a most interesting chat about Parliamentary life circa 1900-1914 with the Pater. He tells me that in those days old man Fells (of soap fame) was very keen for him to have entered the H of C as a Taxation of Land Values candidate.

That rather nice fellow and famous airman Campbell Black was killed in an aeroplane today at Liverpool. A bad business.

That infernal pain still keeps flitting about my tummy, always returning to the proper appendix place, Hell take it.

To bed at 7.30 am, BF, and slept splendidly until breakfast in bed at 12. Up for lunch and busy with the Mater on household routine till tea time, when Kidd and his family arrived.

They left at 6.30, being delayed by heavy rain, which also delayed Stanley’s arrival for dinner. Very pleasant musical evening and I walked with Stanley to Horn Lane in floods of rain as a climax.

My pain has been easier today, but tonight it is as bad as ever. Hell.

Breakfast in bed again and up late for lunch. TG, that damned pain is easier, but something funny seems to be going on inside my tummy.

After tea I went down to the Admiralty, incidentally being very impressed with the courtesy and friendliness all the officials there seem to show. I duly interviewed the man in charge, a Commander chap who explained the show and gave me a huge bundle of literature to study. Incidentally, I got a notion that there’s a hell of a lot of hard work to be done and not much compensation, if any, in the way of seeing or doing anything with shops. I will have to think it over a lot.

The last of the chairs came from the upholsterers today; so that means another bill to settle, I suppose.

This morning came two courteous explanatory letters from Birley and Fryers, but I fear the Pater has sent very snotty replies. What a fed up life it all is.

Up with the Mater and the Boys and then back to bed again to sleep until 2pm. Woke still with that unpleasant shifting pain and can’t imagine what it is. Also, it begins to strike me that I’m not very fit these days, lack concentration, am nervy and utterly weary. God alone knows what it all is.

Went to the Aunts’ after tea and they most generously gave me 2/6 as a share of some lucky cash they had come into. By Jove, it was welcome too.

Miss Hodges came for the evening and I took her home at eleven. At twelve I set to and made a new medal for the yachting shield.

A nice situation is developing at Geneva, where, to try and secure Italy’s participation, France and Britain are trying to find some legal excuse to exclude Abyssinia. Pretty fine, ‘pon my word.

Woke at one and TG the pain is much eased and has not troubled me more than once or twice today. It will be a blessing if the damned thing goes.

After tea to the Library, where I procured a copy of the Admiralty Handbook on W/Y; and a dreary tome it is, like its subject. I find it extremely difficult to make up my mind about the Reserve. Without a war there seems little or no chance of serving afloat; and the work to be studied is appalling, and dull at that.

This evening Mr Stanley rang up and asked me to go with him to see Mutiny on the Bounty and I must say I thought it a splendid film. Charles Laughton as Bligh was wonderful.

I see that blighter Sir S. Hoare is just back from a splendid tour of the Mediterranean Fleet. Some people do have all the luck in this world.

The Mater tells me that she has been feeling unwell similarly to myself. I wonder if any of the food’s been bad?

Rose late as usual and interviewed the Pater about the bank. Decided there was nothing to be done but go down and overdraw the beastly account. Did so and got home early.

Then to Ealing shopping, for Thomasina’s second birthday tomorrow. The Pater very decently stood me some cash to buy the prizes and the drinks for tonight’s Second Anniversary Night of the Granville Club.

It went off very happily, Kidd absolutely sweeping the board, with three records for the session, a really splendid achievement. We had all hoped that Ine and the Doc would manage up, but at the last minute they could not, worse luck. Ine sent me a letter.

Walked to Horn Lane as usual.

The majority of the powers at Geneva have inside on recognising Abyssinia, to the wrath of Italy and the embarrassment of France and Britain.

Japan seems to be on the point of going to war with China.

Made a poor start and tings were not improved by finding a snotty letter from the bank about the overdraft. In the afternoon went over to Kidd’s to wish Thomasina many happy returns of the day, it being her 2nd birthday. The Mater, the Aunts and Muriel and her youngster were there, so she had a merry time.

Then over to the School for tea, after which we all went over in a body to the Richmond Theatre to see Miss Hogg playing in the lead of that most puerile and amazing play of Ouida’s Moths. More infernal tosh I’ve never seen, but Miss Hogg was jolly good. Home to the School for dinner and then back here.

Sorry to say that both the Mater and Pater are far from well, and I fear it’s this interminable worry that is the cause.

The electricity is due to be cut off in the morning. What an existence.