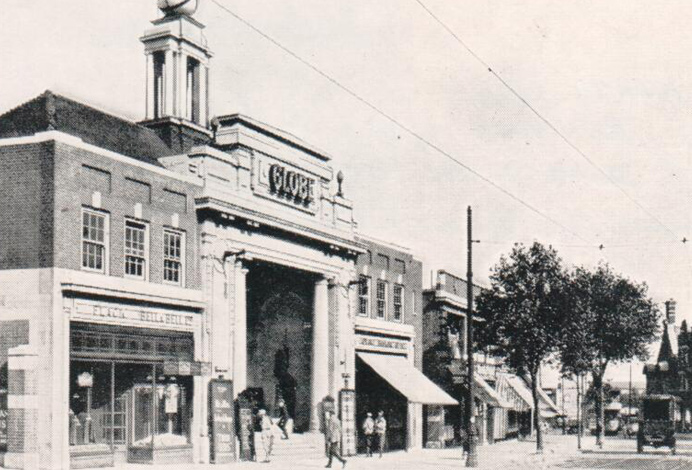 “The world is just insane and devil ridden.” As the war drums beat ever louder, Goodlet fears what is to come. Week 35 also includes trips to Ealing Common to fly model aeroplanes and a visit to the Globe Cinema (pictured) “to see the film Tudor Rose, which I must say is a grand picture,” he wrote. Catch up with previous weeks in the history section.

Up for lunch and then foolishly went back to bed, where I rolled over on my hot water bottle, the water in which was now quite cold, and burst it. My word, I rose then in a hurry, soaking wet and shivering. Damn the thing.

In the afternoon the Aunts came over to join us for the weekend, and Kidd, Joan and the babies came along for tea.

At six I went to the Library and thence on to West Ealing, book hunting. After dinner went over to Kidd’s and spent about 2 hours with them.

Had a letter from the Mater today, saying the weekend party was going splendidly; also, Ine most decently sent up 10s for the party here.

Was deeply grieved tonight when Aunty Jen told me that they had seen in The Scotsman the death of Mr W.W. Anderson, Old Dub Dub, my beloved 5th form master at Watsons. I wish I had seen him again.

I had intended to go to church this morning, but I fear that though the spirit was willing (last night) the flesh was weak this morning when Aunt Mary called me at 9.30.

Was up for breakfast at 11.30, and just finishing it when Miss Hodges called with two theatre tickets for tomorrow. Very decent of her.

In the afternoon I went round to take tea with the Davies and spent a charming time. They have a most glorious garden and we had tea on the glass veranda. Enjoyed myself very much.

Returned home to found Kidd and Fuzz had been flying Fuzz’s new model aeroplane on the Common. After dinner rang up the Mater and found that they were all having a splendid time down there.

Wrote Daniel and went out to post it and called on Kidd for a few minutes.

Home to late tea and so to bed.

Rose at eleven for breakfast, to find the Aunts gone. At 1.30 Buzz went off to the pictures and Fuzz and I went up to the Savoy Theatre to see Lady Precious Stream. We enjoyed it immensely; its quaint charm and simplicity is quite delightful. We walked along the Embankment to Westminster and had tea in Lyons there and so home. Saw the barge Veronica being towed up river.

After supper we went out to the Common and flew Fuzz’s aeroplane until it was dark, when we went on to the Aunts’ and picked up Buzz. Home at 10.30 and so ends a very good day.

Heard from the Mater today that the party is coming up tomorrow morning.

Today Germany gave her adherence to the Arms Neutrality Plan. Good. The Queen Mary today broke the east to west Atlantic record by nearly 4 hours. Here’s luck for the return.

HM Destroyer Keith today collided with, and sank, a Greek steamer in a fog in the Channel.

Up having breakfast with the Boys at 9.30 and was all ready for the Steyning party when they arrived at 11.15. They seem to have had a really wonderful time. The Mater, in particular, seems to have benefitted greatly.

In the afternoon went to the Library and secured a book on astrology, which I intend to study. Called on the Aunts and then went over to tea with the Grundys, who look very well after their sojourn in Romsey.

Home at 7.45 and gave the Pater and Fuzz dinner, Ruby having taken the Mater and Aunts to the theatre and dinner and Buzz also being out.
Everyone returned very charmed with their pouting, and so to bed.

The day’s sensation is the execution of Zioniev, Kamenev and 14 other Bolshie leaders in Moscow.

Rose very late and tired, as I had sat up till six reading up astrology, which is very fascinating abut very, very difficult.

Pottered about on routine work in the afternoon until Joan and the youngsters came to tea. I saw them home at six.

We sat long over dinner tonight, talking over Edinburgh with Ruby.

The Pater had lunch with Garrick and Butler today, also Adams; but I fear there is but little prospect of anything concrete being achieved.

Today was signed in London the Anglo-Egyptian Treaty, which puts our mutual relation on a new but very good footing and is easily the best achievement of this government in foreign affairs.

The world is still staggered by the Russian executions yesterday of so many of the prominent old guard of the Revolution. One is shocked by their fate, but remembering their doings, it is hard to pity them.

Up reasonably early this morning and to the bank before lunch. Some routine work in the afternoon and then spent an hour on the Common with Fuzz, helping him to fly his aeroplane. Very pleasant it was too in the fine hot sunshine.

After tea went down to the Library for an hour. This evening only Kidd turned up for yachting. He, Fuzz and I sailed two very good matches.

The LNER have made a magnificent new record on their Silver Jubilee train by covering 7 miles at over 114 mph. Engine Silver Fox, load 270 tons.

Up at ten this morning and busy on helping the Mater prepare for the Brighton folk, who duly arrived at lunch time.

After lunch the Boys took me to the Globe to see the film Tudor Rose, which I must say is a grand picture. Home to dinner, whereat were also Ruby and the Aunts in addition to Ine and the Doc. and, as Kidd and Joan came along just afterwards, it was a most happy reunion and very merry party.
The Doc., Kidd, Fuzz and I sailed a great match, one of the longest and most exciting I have ever sailed, and the most enjoyable. It has been a good party.

There seems to be some hope of a settlement in Spain, and it is significant that that blighter Mussolini now seems quite anxious to sign the Non-Intervention Pact. Russia and Germany seem to be indulging in an outburst of mutual hate and Japan is talking her campaign against China to incredible lengths. The world is just insane and devil ridden.