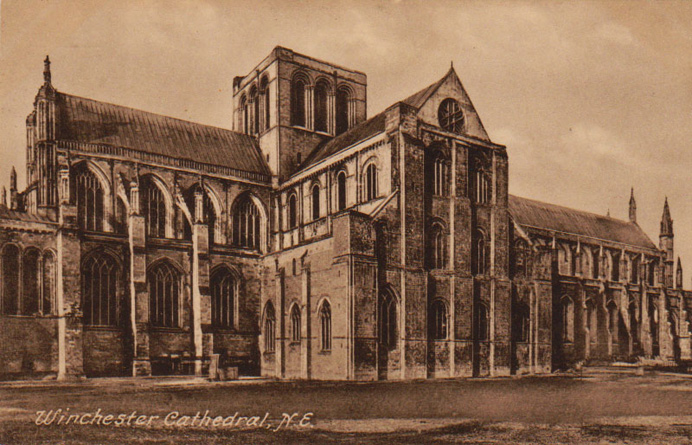 As week 33 unfolds, Goodlet discovers he has (finally) got a job, while still enjoying himself on the south coast. A host of things then occur, ranging from a tale of pink knickers being hoisted to a visit to Winchester Cathedral (pictured). Meanwhile, the ‘hideous bloodbath in Spain’ continues. Catch up with our serialisation by viewing all previous weeks in the history section of the site.

Usual very late start and then after lunch went with Miss Grundy to meet Helen Brierley at the station. She did not turn up by the train expected, but I had a fortunate quarter of an hour there, as the line was extremely busy with traffic, both SR and GWR, and I saw the ex-SM & SWJR 4-4-0 which I last saw in Swindon in 1927. Afterward went out with Grundy and Briegel and watched a cricket match.

Home to tea where we found the visitor book duly arrived. Then, it being a fine evening, I betook myself to the station for an hour and was rewarded by seeing many interesting locos., including Adams a 4-4-0 666 and 0-2-4 614, and also Drummond 6’7 with stove pipe chimneys, and two little hoppers.

Usual pleasant supper and two exciting games of darts. Heard today from the BBC that I had not got that job. Letter from Fuzz to say the visit to Chatham had been most successful.

The Olympic Games finished today in Berlin; (wish) I could day as much for the general European situation, which is very ugly and getting worse.

Up as usual just in time for lunch and then spent a truly wonderful afternoon in a deck chair in the garden, revelling in the hot sunshine and delicious summery air. Wrote the Mater while there.

After tea accompanied Miss Grundy to evening service at the Abbey and was glad I had done so; it is a most beautiful old church and the service was excellent, very high, with much bowing and candles. I enjoyed that sermon, by the curate, and found much profit from it.

Afterwards wandered up to the station and had the good luck to see Drummond 4-4-0 No. 440 rebuilt. Saw also a GWR train headed by a Mogul.
I think the international situation seems less dangerous somehow and rejoice it is so.

An amusing story comes from Cowes that some rascal (unknown) hoisted during Friday night a pair of pink silk knickers to the flag of the RYS and they flew for a long time before being spotted officially.

Up in much better time this morning, to find that friend Grundy and DB had set off for Cadnam, whither the ladies and I were to follow them. We bussed to Ower and then tramped onto Cadnam, where we met the others and had a picnic lunch. The we tramped into the New Forest to see the Rufus Stone, which is actually a triangular iron pillar, marking the spot where the stone stood that marked the tree off which the arrow which killed King WR is said to have ricco’ed. Leaving the ladies here to return by ‘bus we set off to tramp back and did so by divers winding roads and paths over lovely country.

With half an hour’s halt for beer at the Vine Inn, Ower, we reached home at 9.15, where the ladies provided a gargantuan feast. Dashed welcome it was too. I calculate that I have covered 19 miles today.

Had a letter from Daniel today; he says the Chelsea hose deal is off. I see the Rebel Spanish cruiser Cervera has shelled the English yacht Blue Shadow and killed her owner, a Captain Saville.

Up about lunch time to find two letters awaiting me, one from the Pater and one from Jeanette from Marseilles. She says she is due in at Tilbury on the 16th. From the Pater’s letter I gather things go on all right at home.

I really felt I ought to be bringing my visit to an end, but my charming hosts were insistent that I stop until Saturday at the least and I must say I’m delighted to do so.

Spent some time up at the station tonight but did not see a lot of traffic.

Tonight Mr Grundy took us all to the local flicks where we saw The Melody linger on, quite a good film.

The news today is not much, but more of our men have been killed in Palestine. I wish to God that beastly business was over.

The King has started his cruise in Nahlin down the Dalmation coast; I cannot but think it is a most ill-advised business.

Up at the usual late hour and found a letter from the Mater to say all’s well.

After lunch the ladies departed to Salisbury and I settled down to a spell of correspondence, writing the Mater, Ine and the Doc. and Daniel.

After tea, a meal prolonged by a long philosophical discussion, to the station, where I was fortunate enough to see SR 0-4-4T No.1, a small Drummond engine rather disappointing at the bunker end.

The others picked me up there and we went for a stroll in the country. The ladies returned at 8.40 enchanted with Salisbury. After dinner we played darts for two solid hours and Mr Grundy and self were well beaten. I t had been arranged to walk to Winchester tomorrow.

In Palestine a crowd of our fellows have been surprised by Arabs while bathing and two murdered. Damn the place. In Spain the Rebels’ advance from the south seems, unhappily to be succeeding. Two Rebels generals have been shot in Barcelona.

Up at 11.30 and at 12.30 G, B and I set off for Winchester. The day was fine but not excessively hot and we made very good time, covering the 12 miles odd from this house to the Cathedral in 3 ¾ hours, with a 40 minute stop for an alfresco lunch on the hill above Hursely. We spent over an hour in the Cathedral, and words can hardly describe its beauties. It is glorious and I thought of the generations of men who had planned over it, worked upon it and served in it, and of all those who in all the ages had perhaps wandered in on just such a sunny afternoon, to dream of the past and visualise the future. It is grand to belong to a land which can raise such lovely works and cherish them through the long ages.

Grundy then took us all through the College buildings and grounds, and here again was the grandeur of age and loving veneration for it. Winchester, which we thoroughly explored, is in fact the embodiment of age and yet is a bright and cheerful little town. I forgot to state that we saw the Cathedral bells being lowered from the belfry; and also that there is a magnificent glass case model of the Mauretania in the north transept.

We had a leisurely tea and, after dispatching a card to the Mater and Pater, we set off on our return at 7 pm. We struck southward on the Southampton road and looked at the beautiful old Charity of St. Cross, a sort of alms community where live 24 venerable old men. Here again the note of beautiful and well loved antiquities is sounded. I was especially taken with the magnificent lawns, which seems to be one of the hallmarks of Winchester. I have not before seen so much or so splendid turf. Another feature, too, of the district are the very elaborate and ornate chimney pots that abound.

Leaving the high road where it crosses the railway we struck across the open country (there is still some left in England) to Hursley and in the gathering darkness pushed along the Romsey Road for home. The walk would have been perfect but for the motor traffic on the road. Why must 90% of people drive like lunatics and cads? We stopped at the pub at Amplefield for a drink and dropped into a scene such as Conan Doyle would have loved to describe. I was enchanted. And so on to Romsey, where we arrived at 10.45, having covered in all today about 28 miles. Supper was indeed welcome.

The Pater most decently sent me 10s today, which completely saved the situation for me.

Up at my usual late hour, and found a letter from Ine.

Strolled through the town in the afternoon and spent an hour at the station, seeing much of interest. Saw Jubilee 640 and GWR 1126; also big SR 4-6-0 842 on goods train.

In the evening we three went out for a walk and reached Timshurst, where we found a wonderful little flint built church dating back to King Alfred’s time. It could hold only 72 people at most and has a chained, brass bound Bible. A wonderful little building and connected by a private gate with the squire’s house, also a grand old place.

After dinner a tremendous darts championship, in which I found my game much improved.

Not much news anywhere, save of course of the hideous bloodbath in Spain.