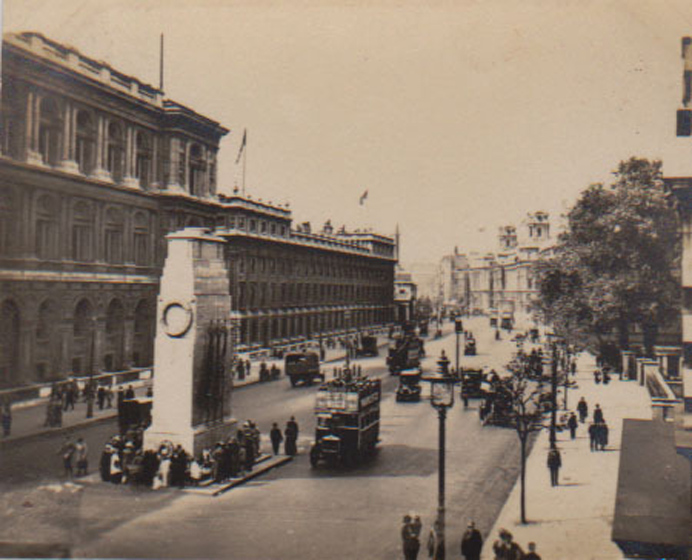 Week 31 of our serialisation of Alexander Goodlet’s Ealing diaries includes the usual mixture of domestic preoccupations and international current affairs. Among many things, the Spanish Civil War and  Japanese militarism catch his eye – along with Canadian diplomats holding a service at the Cenotaph (pictured) before heading for tea at Buckingham Palace. You can visit the history section to read the rest of the series if you have missed any of it.

Was busy most of the night and then had breakfast with the Mater at 7.45 am. After a change and shave duly went over to No 15 and found them all rather in a frenzy of dressing and packing for breakfasting. Joined in and then we set off for Victoria, where, in spite of dense crowds, I saw them comfortably off in excellent seats.

Went along to Charing Cross and saw the Naval Exhibit in the Underground Station and so returned home in floods of rain, damn it. The Boys were home to lunch, having duly broken up for the summer holidays. Did some routine work in the afternoon and then turned in for a cat nap till dinner time. Afterwards went to Ealing and finished up with tea at the Aunts’. Have been very busy since I returned, helping the Mater to get the place straight for the Brighton Folks’ visit tomorrow.

Today was Rosemary’s christening; only wish we could have been there. Good luck always to her.

Position in Spain still terrible. France is reported to be helping the Spanish Gov. officially.

Quite an eventful day. Woke with breakfast in bed to find Ine, the Doc. and Margaret already arrived. Ine, I’m glad to say, looked very much better than I could have hoped. The Aunts came along and we all spent a very happy day.

They left at six and should have had a good run down.

Mr Stanley came for dinner and we had our usual musical evening. Walked with him to Horn Lane. About 11.15 the Daily Express rang up to tell the Pater, via their correspondent in Spain, that Arena was safe at Cerajo Abajo.

And now for a really wonderful piece of news. The Doc. has arranged, with truly wonderful generosity and goodness of heart, to take the pressure of the financial strain here until things come right. God bless him.

Today the King, as King of Canada, unveiled the Canadian Monument at Vimy Ridge, before vast crowds.

One might almost describe this as the first day of the new era. Up late, as usual, and found that the Mater had had the pleasure of giving cheques to all our local people; it is a wonderful feeling and a great blessing.

Busy in the afternoon and then went shopping in Ealing for the Pater. Then round to the Aunts and after dinner over to Kidd’s flat, where their kitten was feared to be locked in. However, there was no sign of it, and so all was well. Later wrote the Doc and went down to Ealing to post it.

The news today from Spain still indicates a chaotic and bloody state of things, but the Government does seem to be progressing slowly. Germany has made official objection to Spanish Gov., while Italy has officially helped the Rebels. Bad situation all round.

The King has cancelled his projected holiday on France so as not to embarrass the French government.

The queen Mary just failed to break the Normandie’s record by 70 minutes today. I fear she can’t do it.

Up fairly early and down to the bank, after which I walked to Westminster and so home. Paid the papers and then went off to the school sports which, however, were drowned in floods of rain and had to be shifted to the gymnasium. Had tea with the staff and stayed at the School until 7, when I brought Mr Stanley home to dinner.

Spent a pleasant, quiet evening and saw him to Horn Lane at 11.15.

Not much news. Spain is still bad and there has been a fresh flare up in Palestine, where a British constable has been killed. I wish J.H. were safely out of the beastly place.

Today the Treasury sanctioned the placing of an order for a sister ship of the Queen Mary with John Brown’s Ltd. She is at present to be known as 552.

The Mater and Pater have put in hand preparations for cleaning the house and having all the furniture repaired. Harbingers of better times? I wonder.

Up rather late and messed about rather afterwards, so was not out until 4.30, when I went down to Chiswick to do some shopping for the Mater. Then, at seven, the Mater, Boys and I all went round to the hall in Acton for the Lancaster House prize giving. It was a good show. We met the Aunts there and brought them home to supper.

Spent a long time over washing up afterwards as I was half the time gassing about the RN with the Boys and annoying the cat.

The family made an early retiral tonight and I shan’t be very late either. Queer how contrary is human nature. Last month I was straining every nerve to get on with the Rocket; now although much less busy and worried, I somehow can’t be bothered doping anything to it.

My house cleaning goes on apace. My God too, it is nearly five whole years since I came home. It seems incredible.
Spain is as bad as ever and Japan seems to be putting a stranglehold on our trade at Singapore. The Canadian contingent of visitors held a service today at the Cenotaph and were at Buckingham Palace to tea.

Rose very late and tired as usual. In the afternoon went shopping in Ealing with the Mater and then on to the Aunts’ for tea.

After dinner EH came in and he and I yachted in my room till late and I saw him home about 12.30. Since then have been very busy trying to repair a jacket. Have made a somewhat indifferent job of it I fear.

Tonight I had a letter from Jeanette from Mombasa, written just before she sailed; it doesn’t look as if she had received my last letter. She appears to be returning via Suez and Gibraltar, which is surprising.

Little news, save the King has decided to take a Mediterranean cruise in the SY Nhalin.

Usual late rising, feeling even more tired out and rattled than usual. Really, am putting up a pretty poor show these days. After tea went with Buzz to the Library, meeting LH en route.

We were just finishing dinner when who should breeze in but Ruby MacDonald, newly arrived form Edinburgh. It’s seven years since she has been with us. Saw her off at eleven and then at 11.10 what should happen but Grundy rings up and asks me to go down to Romsey with them. It’s a bit awkward, of course, with all the things to be done, but the Mater and Pater have been terribly decent in sweeping away all questions of difficulties; and so I’m off tomorrow, or today rather.

That chap McMahon was committed for trial today, but I must say I think the poor devil deserved pity rather than blame.