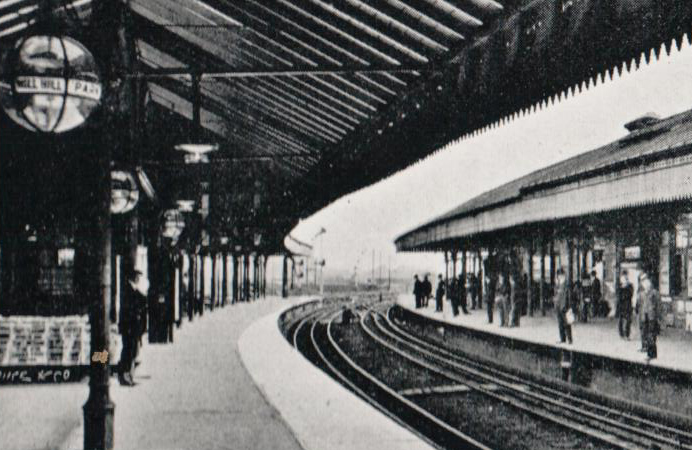 The Spanish Civil War, dancing with a plethora of women and domestic worries are the flavour of week 30 of our serialisation of Alexander Goodlet’s Ealing diaries from 80 years ago. The week ends with a long chat and a stroll down to Acton Station (pictured). Visit the history section to read the rest if you have missed it.

Up for lunch with the Mater at 1.30 and in the afternoon went to Ealing shopping for the Pater and also had my hair cut.

After dinner went over to the dance at Lancaster House and enjoyed it very much although, owing to a shortness of men, I had to dance most of the evening. Even Stanley was dancing a lot and, by the way of a happy coincidence again won the raffled box of chocolates. They asked me to stay to late supper at the School, which I did and did not reach home here until 2 am. Was well drenched by heavy rain in the process.

Very little news. Jeanette should have left Mombasa in the Dunluce castle today if all goes according to schedule.

To bed in rather better time (not that that’s saying much) and the Mater brought me breakfast in bed, which glorious. After lunchtime had a long simmer in a scalding bath and emerged at tea time, when Kidd, Joan and the youngsters were here. Put in a pleasant hour in the garden until driven indoors by torrential rain.

Typed a letter for the Pater before dinner, which we had early, and then went over to the Aunts to deliver two photographs of Margaret and Thomasina which the Pater has framed for them. Found them very cheery although Aunty Mary has a bad cold. Called on Kidd and Joan on the way home. Shall be quite early to be tonight.

Actually got to bed in darkness last night, so we improve. Didn’t make me any less tired this morning though. Up at lunch time and fairly busy during the afternoon, including a half hour’s work in the garden. After tea to the Library and the Aunts’, getting well drenched in the process. Found AM’s cold much better. After dinner busy again and typed a letter for the Pater, subsequently going down to Ealing to post it. Since returning have typed two more for him. Had a letter from Daniel this evening; evidently he is descending upon us tomorrow.

The revolt in Spain has become a very big and serious affair. All the extreme conservative and fascist elements have risen and seem to have captures many important places, including Madrid, but this latter is denied. That blighter Major Franco, or General now, actually sent troops from Madeira to stir up trouble in Morocco and many of these have now invaded Spain itself. Franco and that chap Robles will have to be shot, I fear.

A mixed sort of day. Was in bed again last night by 4 am but still weary as sin at 1pm. Daniel rang up at 3 and I went along and had tea with him at Williamsons at 4.  We chatted till 6.30 and then walked home via Twyford Bridge. Afterwards we went over to Kidd as he was reported ill, but found him quite recovered. Daniel left at 10.45 for his hotel and I escorted him home Miss Hodges, who had been calling on the Mater.

The Pater spent the afternoon out at MTs interviewing J. Dryers and D. Gardiner concerning Buzz and Fuzz. I fear the latter has done badly in his exams again. I fear our financial embarrassments badly handicap the Pater when he is dealing with all these situations. I know it well, that feeling.

Spain is one vast battlefield at present, but the Government seems to be coming out on top; it is, however, a very bad business.

To bed at 4 am again and up at 10.30, quite a record for me. Got a fair amount of routine and gardening work done and after tea went to the Library and paid a hurried visit to the Aunts. Joan was over to tea and I met Buzz and her taking the babies home on my return. Also met Daniel, who came to dinner.

After dinner we went out for a long stroll and put in a good spell watching the shunting at Twyford Bridge. Back here for some tea and he left at 11.30.

Have been busy on routine work and am now about to type a long letter for the Pater to Lord W. The Pater seems sunk in gloom and the Mater is very upset and justly wild about the situation regarding the boys at school.

The Spanish situation is worse than ever and more contradictory, both sides claiming wholesale victories; but it is a bloody business is one fact without any doubt.

Up reasonably, and then to the bank to cash a small cheque the Pater managed to raise. Home to tea with the Mater and then called on the Aunts and at the Library. Daniel was to dinner, but Mr Stanley unhappily could not come until 9.30. Kidd, the Hodges and JD all turned up and we sailed two terrific races, one of which Daniel won and I the other. Walked to Horn Lane as usual.

Had the surprising news tonight that Leslie Hodges is engaged. Way of all flesh, if he had stuck to the Yachting Club he would have been a free man today.

Affairs have gone very bad in Spain, and today the Rebel aircraft surpassed themselves by bombing several of our ships in the Straits of Gibraltar. The bombs fell sufficiently close for splinters to fall on board the liner Ophir and the destroyer Wild Swan. The latter is said to have opened fire in retaliation.

A furious all night debate took place in the House on the Government’s Unemployment Relief Bill.

Up reasonably early and busy on one thing and another until 3, when I went off to meet Daniel for tea at Williamsons. We chatted for two hours very pleasantly and then strolled down to Acton Station via park Roads North and East, just to view old haunts. Parted from him there and called on Mrs Hodges to leave a flag book for Ernest, then home to escort the Mater to Lancaster House for the York House girls show of HMS Pinafore. A damned good show it was too and we both enjoyed it immensely, as did the audience. Buzz escorted the Mater home, as the masters had invited me to stay for the staff supper. Did so and in fact stayed until 1.40, when I went over to Kidd, where I had promised to call. Their light was on, but, looking through the window I saw them all asleep so came away. Shall not go to bed tonight, but drink tea and read instead.

Situation in Spain is worse than ever…