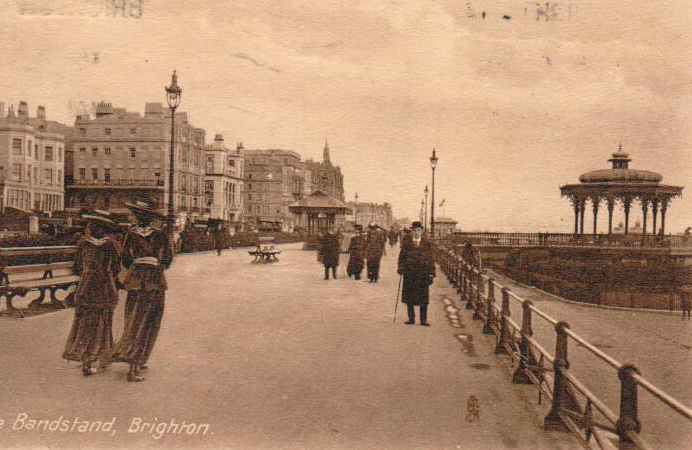 This week, week 28, as the summer unfurls, Goodlet’s mother heads to Brighton to visit relatives and our diarist turns his thoughts to the ‘obscene, bullying brutes’ running the aggressive, totalitarian states in mainland Europe. Remember, you can catch up with past weeks, and read an introduction, in the history section of this website.

Just wakened long enough at 9 am to wish the Mater bye as she left for Brighton and then turned over and slept like a log until 1.30. Rose then and made lunch for the Pater and self. Busy afterwards till after dinner when I went for a long walk, it being a beautiful evening.

Met the Mater at Ealing Common Station with Joan; curiously, they had all met in the train at Turnham Green.

The Mater found all well at Brighton and Ine much better. The baby’s name is to be Rosemary.

Rose very late and found the Aunts had been in and gone.

Busy on one thing and another until dinner, when Stanley came. Afterwards the Hodges and Kidd turned up and we sailed three matches, two of which Kidd won and Mr Stanley the other. The Hodges took D. home in their car. I walked to Horn Lane as usual.

There is still much bad trouble in Palestine and it has its repercussions in Geneva.

Beastly late start and didn’t do much, I’m afraid, after I was up. To the Library and then to the Aunts’, with whom I had tea.

Home for dinner and then Stanley rang up to ask if I would go round to the School and give him a hand on preparations for tomorrow’s fete. He had scarcely rung off when on came Daniel from Earl’s Court, with the news that he and his girl are in town house hunting. They are coming over for tea on Sunday.

After dinner to the School, where I put in some five hours hard but pleasant work and have got back here about 2.45 am. Am now going to put in a couple of hours’ work finishing off the race game for Stanley’s stall at tomorrow’s do. Have promised to be round there at 11 am.

Well, that’s another thing over. As a matter of fact I worked all night finishing the race game and so was in tie for breakfast with the Mater and the Boys. Then turned in for a couple of hours’ cat nap and of course slept like a log until 1pm. However, I was round at the show with the finished game by 2 pm and all was well.

The show went splendidly and our game was a tremendous success, drawing the biggest crowds of the day and turning over a lot of money. I was asked to stay to dinner (incidentally I had some strawberries, the first for ages) and got back about 12 o/c.

I hear that Daniel and his girl called on Kidd last night.

Slept till lunch time and then, with the Mater, busy getting things ready for our visitors.

They duly arrived and stayed to supper. Daniel seems much fitter and Miss Cunliffe is a very pleasant and charming woman. Very well dressed, too. They left at ten and I went down to air mail a letter for the Pater and have a long walk in a very beautiful evening.

Not much news. A row over the Danzig position at the League of Nations, where the German Nazi Commissioner made a most impudent and insolent speech and by his rudeness of gesture provoked a scene. What obscene, bullying brutes all these representatives of totalitarian states are.

Did not wake until 2pm and then rose feeling like death. Somehow these days I feel under a sort of crushing oppression, as if there weren’t a single prospect of hope left anywhere; and I’m damned if there is anyway.

At tea Daniel rang up and asked me to meet him at the Forum this evening for coffee. Went round to the Aunts’ and had a second tea there and then after dinner went down to Ealing, incidentally meeting Kidd en route.

Duly met Daniel and his girl and was entertained to coffee. Of all, people, too, whom should I see there but VR. Home by eleven.

It is quite evident that the FO people here are utterly fed up with Germany and in reviewing all the circumstances I must say I don’t blame them. Germany, Italy and Japan seem to me to be three homicidally lunatic nations. Not a word of hope from any business source.

Up rather earlier this morning, though still feeling ghastly, and managed to give the Mater a bit of a hand with the routine work, as our charwoman sent a letter this morning calmly announcing her intention of leaving. In the afternoon wrote Jeanette and typed a letter for the Pater, later going down to Ealing to air mail them.

Arrived home, I put in a sudden and strenuous hour and a half on the front garden and certainly altered the aspect of it for the better.

Daniel and Miss Cunliffe arrived for dinner; incidentally, they brought the Mater a bunch of magnificent tulips. We spent a pleasant, but hardly spontaneous, evening. I’m afraid our nerves hardly make us ideal hosts these days.

Little news. We seem on the point of patching up a good agreement with Egypt, but Palestine is still an ugly situation.

The poor Queen Mary is now a rather despised anti-climax. What a public.

Up to breakfast fairly early but then, I fear, back to bed and so slept until 4 pm.

Was having tea with the Mater and Pater when Joan and the youngsters arrived, all looking well. Saw them home at 6 pm.

After dinner went over to the Aunts’ and spent an amusing hour studying their reactions to the latest manifestation of Daniel.

Home by 11pm and have just pottered about since.

Rose at 1.30 after nine hours sleep, feeling more exhausted than ever. The Aunts were in and had very decently brought me some cigarettes. Then to the bank and so home to tea; then out shopping in Ealing, calling in at Joan’s on the way home.

Mr Stanley to dinner and later Kidd, J.D. and the Hodges arrived and we sailed two grim and very cut throat races. I was lucky to win the first and in the second had a tremendous duel with Kidd and EH, resulting in we three being last while JD and Mr Stanley romped home.

Walked to Horn Lane was usual.

Not a lot of news. Italy is beginning to find her real troubles in Abyssinia, so much so that France thinks she will be too preoccupied there to be of any use in Europe against Germany, who is rapidly becoming the common enemy.

Our Mediterranean Fleet is to be reduced, but not to last year’s level, and we seem to be reaching some sort of agreement with Egypt. Palestine is quieter, T.G.

It’s curious what a queer, subconscious feeling of the passing of time forever this writing of the date at the head of these pages gives me, a sort of steady, unhaltable progression to an inevitable destination. It’s a horrible feeling somehow, and yet without the dates there wouldn’t be much value in the log and I certainly want to keep it.

Rose very late and after tea went to the library, and after that to the Aunts’. Incidentally, obtained David Kirkwood’s autobiography which, having read, I consider a most valuable record of wartime industry and peacetime Parliamentary life. Took a walk after dinner.

The Britannia was ceremonially sunk at midnight last night by the Navy. It took place off the Isle of Wight in accordance with directions in King George’s will.