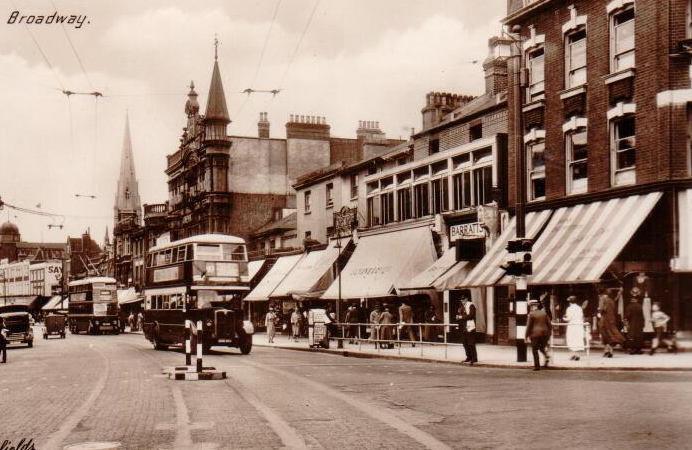 “We had a coffee in Lyons for old times’ sake and strolled back,” writes Alexander Goodlet in an unusually jolly mood (Lyon’s cafe is pictured, to the left of Barrett’s in Ealing Broadway). Week 26 is not, however, an uncharacteristically happy one for our hero. He is even ‘swindled at the tobacconists’ – for which he ‘curses’ the girls who served him. You can read all previous weeks of our serialisation in the history section.

Somehow kept awake all night and gave the Boys their breakfast this morning, then the Mater and finally the Pater.

The Mater rose about noon and seems a bit better, although, worse luck, her sickness still seems to persist. About lunch time I could keep my eyes open no longer and dozed off until tea time.

Buzz came back from school very grumpy because, in spite of his letter from home he got into bad trouble for being absent on Saturday. Result, the Pater has written John tonight and I had to type it and take it to the late post. Called on the Aunts and they very decently gave me some cigarettes.

All goes well at Brighton. I had a letter from Jeannette this morning.

To bed at 6 am and so of course was like a dead dog at lunch time. Had a letter from Daniel. Busy on routine till tea time, when I went out shopping for the Mater and Pater and for the second time in four days was swindled at the tobacconists’. Curse those girls. Went to the Library before dinner and much enjoyed the walk in the truly beautiful sunshine.

The Mater wrote J.M. tonight and I went down to Ealing to airmail it.

It seems to me that the Mater is not too well, and the ghastly financial worries of these days (aren’t) helping. Also this upset of Buzz at the school isn’t doing her any good. It has not died down, by the way.

Lord Cecil, the Bishop of Exeter, died today. He was a grand old man and a son of the famous Marquess of Salisbury

Poor start as usual, and then made a hurried decision to go to the bank and overdraw a small amount to carry on the housekeeping. Home to tea and then was busy on typing two long letters to the Pater to Buzz’s masters, the Head, Birley and J. Fryers, from both of whom the Pater had letters this morning. It is a little difficult to appreciate their points of view and their conclusions seem to me a little impolite in view of the Pater’s explanations to them.

Went to Kidd’s after dinner and he and I went out and had a drink afterwards. Then on to the Aunts’, with whom I drank a cup of tea. Home to find Miss Hodges had sent me two tickets for the Comedy Theatre on Friday afternoon.

The Mater seems terribly tired and not very well somehow.

Up fairly early, as the Mater left for Brighton at 9am. Breakfasted with the Aunts and the Pater and was fairly busy all day on house routine.

Went to Ealing at 4 and called on Joan on the way home. The youngsters were in the gardens and seemed in wonderful form.

Was busy till dinner time making the racing game for Stanley for his school fete, but I don’t think that he cared much for it when he saw it.

He came to dinner, and Kidd and JD later, and we sailed two most interesting matches. To Horn Lane as usual and got well soaked with rain on the way home.

The Mater returned rather tired from Brighton, but wildly enthusiastic about the new niece who, I gather, is a beautiful baby; but Ine seems to have had a bad time I’m afraid. The doc. most decently sent up a cheque, so we shall manage the weekend.

Up reasonably early and immediately after lunch to the bank, where I drew the remainder of the housekeeping money and then went up to Panton Street to the Comedy Theatre, where I saw the play Dusty Ermine, and thought it jolly good.

Home by 5.30 and then escorted Joan and the youngsters to their place before going on to the Library. After dinner went to Ealing to post letters and met Hodges, so we had a coffee in Lyons for old times’ sake and strolled back together.

This morning the Pater had a letter from Birley, very courteous and regretful. I sincerely hope there hasn’t been an all round misunderstanding. Birley’s letter rather makes me think he feels that we have been unjust to him. Most unfortunate.

On all sides there is condemnation of Duff Coopers’ crazy speech and now today Lord Londonderry bluntly accuses Baldwin of mistaking facts in parliament. What a gang.

Poor start, but for all that was up and dressed for lunch.

Fairly busy all afternoon and after tea went shopping for the Mater in Acton. Then to Kidd to find out the details for the visit we were to pay to Stuart and Muriel’s later.

After dinner duly went off there and spent a pleasant evening, getting home at 12.40. Found a letter from Ine and one from Daniel awaiting me.
Not much news anywhere and of course none from our own sources of business. What a priceless jam to be in.

Today has been the Air Pageant at Hendon.

Rose for lunch and fairly busy thereafter until tea time, when I went off to have a long and glorious hot bath. Lay in it for two hours and had tea there. Kidd, Joan and the babies were there, but left before I emerged.

Stanley came for dinner and we had a pleasant musical evening. I walked with him to Horn Lane as usual.

The surprising news of today is of the arrest at Georgetown of Skipper Osborne and his brother of the Girl Pat, on a charge of ship stealing. Rather belated, I think, and just a trifle mean.

There’s been another ambush of police in Palestine today, confound it, fortunately without casualties.