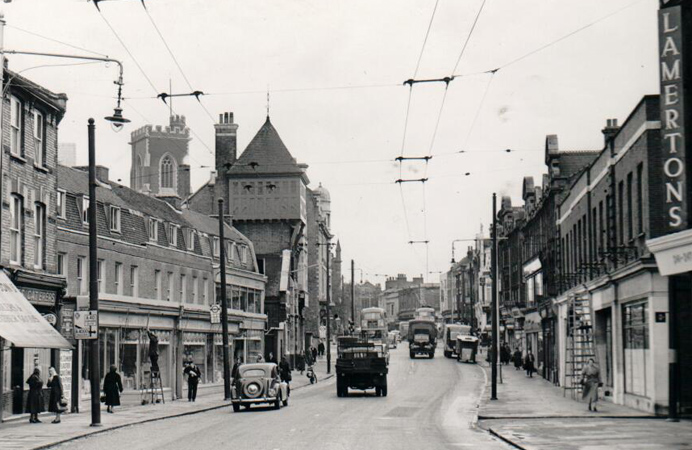 The serialisation of Alexander Goodlet’s diaries from 80 years ago continues. Week 25 includes hot weather, a reply to his application for a job at the BBC, disgust at Britain’s apparent appeasement of Mussolini, several visits to Acton and a solar eclipse. All of the previous weeks are available to read in our history section.

Was wakened this morning by the Mater with the good news of a long letter to her for her birthday from Jock. This has cheered her up a lot.

Unfortunately he confirms that his leave is cancelled until Christmas at least. This is very bad luck.

Busy all afternoon on typing letters for the Pater and one for myself trying for a job, and after tea made a hurried dash to Ealing and a call on the Aunts.

Mr Bronson was here to dinner to discuss some business with the Pater.

I put in six hours’ work on the Rocket tonight, but still it is not tested. Still, I hope to get a test on it tomorrow and hope still more that the beastly thing goes. It seems rather stiff.

Slept like a log until 2 p.m. Had breakfast and lunch combined and was busy on routine work most of the afternoon. After dinner took a walk up to Hanger Lane and Twyford Avenue railway bridges and greatly enjoyed the beautiful sunny evening air.

Home at 10 and then with the Boys started to get the Rocket under steam, and I’m sorry to say it was a complete failure. No sign of movement in the pistons, which indeed seemed to seize immediately the heat was turned on. It is very disappointing.

Little to report save a letter from Daniel. The trouble in Palestine seems to be as bad as ever and nearer home our priceless Cabinet seem to be on the point of a complete surrender to Italy over sanctions.

Again did not awake until 2 p.m. and thereafter put in a pretty busy afternoon. Joan and the two youngsters were here and I took them back home at six p.m.

After dinner repeated my last night’s stroll and enjoyed it even more. It being a really gorgeous evening.

On my return to the house found an acknowledgement of my letter from the BBC. It would be queer if the stray impulse that made me return to the newspaper room in the library the other night and look at The Times actually brought me a job. Ya Veremos.

Ascot week seems to be running its course in real Ascot weather.

Political forecast has it that our government have decided on a complete surrender to Italy. Of all the cowardly, dishonest and shortsighted decisions this is one of the worst.

Up at 1.30 and, after a hurried break-lunch, to the bank, where I boldly withdrew or, I should say overdrew, six pounds. Home again and then to Acton shopping for the Mater.

Then out on to the front steps to read The Great Shadow, Conan Doyle’s great book, which is my traditional reading on the afternoon of each Waterloo Day as it comes round, since that magic summer of 1914, when I read it every afternoon for three months, sitting out on the galleria of 63, Calle Corcega. All the old thrill.

Mr Stanley came for dinner, and Kidd, J.D. and Eddie afterwards. We had two delightful and most interesting races, in which Stanley and Kidd were first and second, and vice versa respectively. Horn Lane as usual.

There seems to have been a colossal row in parliament over the official decision to end sanctions.

Fell asleep in the drawing room last night when filling up this log, and so it was past six when I got to bed this morning. Woke up like a corpse at 1.30 and after lunch was very busy on routine work till tea.

Went to the library and after supper finished a letter to Daniel and went up to Twyford Bridge, just getting home in time to avoid a tremendous thunderstorm.

Miss Hodges called on the Mater and young Snell on the Pater this evening.

The Sanctions debate, deferred until Tuesday, has called forth an immense nation-wide controversy, and last night on the house Mr Lloyd George denounced the  Cabinet in one of the greatest speeches in his career. One good thing I note in the speeches of Eden and Hoare is a definite promise to maintain and strengthen our power in the Mediterranean. If only the blighters could be trusted to keep it.

The famous Girl Pat was today at last captured by a police ship and her crew imprisoned at Georgetown, British Guiana.

Partial eclipse of the sun this morning.

Up late as usual and put in a fairly busy afternoon.

After tea went shopping in Acton for the Mater and met Kidd. He called in later on his way home.

After dinner went over to the Aunts’ and got home at 11.30. Have spent most of the night soldering up the boiler of the Rocket and testing it; but without much improvement and it is obvious I must make a new one.

The Mater is feeling not so well again. Unhappily this sweltering weather is not good for her.

Little news of any kind, but happily the Herzogin Cecile has been successfully salved.

I note that that old die-hard A.A.B., Arthur Anthony Baumont, has died at 80.

Pottered about most of the night on the Rocket and then started reading, with the result that the Mater surprised me at 9.15. We had breakfast together, and then, I’m sorry to say, she felt so ill that she was compelled to return to bed, where she has been all day and, I hope, feels a little better for the rest.

The Aunts and the No.15 folk were along for tea and in the midst of it the telephone rang. The Doc., ringing from Brighton to say that Ine had had another daughter, born at 3.15 pm, both doing well. Good luck. I think this happy outcome has cheered the Mater.

The Aunts stayed to dinner and I saw then off at 10.30 after a colossal downpour.

Buzz and I were trying the Rocket this afternoon. The number of small defects in fitting just rob it of success.