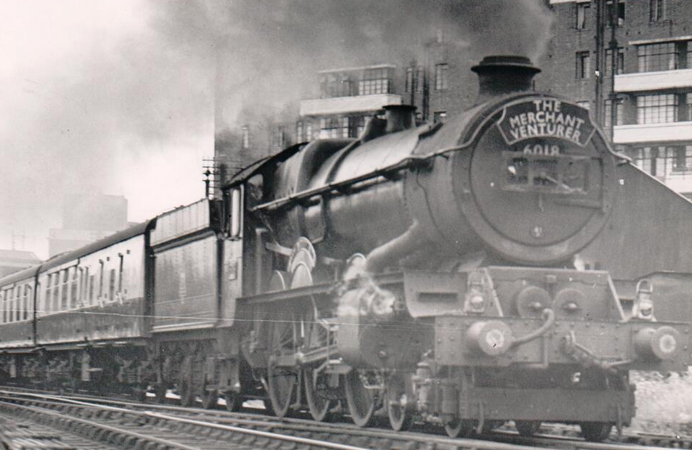 Week 21 of our serialisation find Goodlet’s parents ‘very washed out and nerve wrought’, while trains provide a welcome distraction. If it helps, you can still read the introduction to the whole series.

Up for lunch and spent the afternoon on routine work. Wrote Daniel and went to the Aunts’ for a cup of tea.

After dinner it was such a lovely evening went for a long walk, incidentally meeting J.D. Have spent two and a half hours on the Rocket.

A message from Adams purporting that things are going well. What a hope.

Rose for breakfast at 11 and went for a walk in the afternoon before tea. Saw the up Cheltenham going great guns on the GWR hauled by Rhuddlan Hall, I think. Also saw 2-4-OT 2395, a rare avis these days.

Joan and the youngsters were here to tea and I saw them home afterwards.

Called on the Aunts after dinner.

Had a letter from Jeanette today, she is to be home on August 13th.

Rose very late and tired for lunch. Routine work in the afternoon, including typing a letter for the Pater.

After tea went to the library, calling on Joan en route to return her iron.

Saw the youngsters who were in great form. Busy on the Rocket tonight.

Was up to breakfast with the Mater and Aunts, who came in at 11 am.

Incidentally, they brought me a packet of cigarettes, a wonderful boon.

After lunch screwed up my courage and went down to the bank and drew five guineas, which makes us about £10 overdrawn; but the money is a God’s blessing just now, and at last there is a prospect from Paris of something moving. Ye gods, what an existence.

Home for teas and the pater very decently gave me 2/6 for my 10 B.A. tap for the Rocket.

Stanley came to dinner and afterwards Kidd, J.D. and the Hodges turned up. We sailed two keen and exciting matches. L.H. winning one and J.D. the other. Horn Lane as usual.

Little news anywhere, save rumours that Mussolini is keenly desirous to patch up terms with us.

Rose at lunchtime to find both the Boys are at home ill; seems to be some form of gastric ‘flu.

On the afternoon, after tea, went to the library and also bought myself a 10 B.A. tap.

Meant to have put in a long evening on the Rocket, but like a fool started reading a book and so have accomplished very little.

There is a rumour that Mr J.H. Thomas has resigned. A pathetic and very hard luck ending to a remarkable career. Another rumour, a horrible one, is that Britannia is to be sunk, a sort of formal burial at sea. I cannot understand the King’s unsentimental ruthlessness.

Both the Mater and Pater seem very washed out and nerve wrought. Little wonder, either, still no news of any sort.

Up for lunch and fairly busy afterwards. After tea the Mater and I went out shopping, she to Acton and I to Ealing, where I visited also the Library. Called also at the Aunts’.

Finished all that was to be done by 10.30 pm and was determined to put in a long night’s work on the Rocket; but found I had to make a 10 B.A. die and, upon my soul, what with one failure and messing about finding material to make another, it was 4 a.m. before the job was finished. So I have not put in much time on the Rocket. Still, it all helps in the long run, I suppose.

It is confirmed about Mr Thomas. He resigned three days ago, curious it has taken so long to be published.

The situation in Palestine is becoming uglier and there has been a lot of killing and wounding. The military are now in charge.

Did not wake until lunchtime, but I am afraid just knocked about in my dressing gown until after tea, when I had a bath. Kidd, Joan and the little girls were here for tea. After dinner went for an hour’s walk and felt the better for it.

Have done no model making tonight, and precious little else; wonder if I shall ever acquire the art of filling each minute with useful work? Doubt it somehow, always seem to be weary and working with an effort.

The Mater is terribly worn out today. For her sake, if even for nothing else, God grant some lucky break in the seemingly never ending spell of trouble and misfortune. Something good must happen this week.

Should have written both Jeanette and Daniel this weekend and have been too lazy to do so. What a slack disposition…

The Palestine situation is still a very ugly one and I noted on the wireless news tonight that the police there are still in full active service uniform.