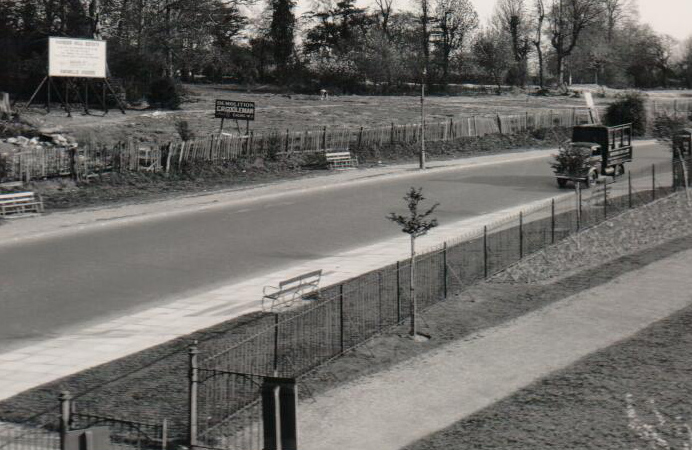 In week 20 of our serialisation, several walks to Hanger Hill help our hero shake off the lethargy of late rising or the worry of his father’s financial concerns. Meanwhile, international relations continue to have an aggressive tinge. To catch up or remind yourself of who is who, read the introduction.

Rather a tragedy befell my resolutions re retiring last night, as the Pater and I got tasking about the old Caledonian Railway days and did not stop until 4.15, after which I had the whole of the routine work to do. Result, 6.10 before I got to bed. Rose feeling awful at 12, but went out after tea and felt much better then.

After dinner went over to the Aunts’ and looked into Kidd’s on the way back. J.D. was there and we left together.

The great sensation today, is, of course, the opening of the Budget Secrets Judicial Tribunal before Mr Justice Porter and its almost immediate elicitation of the fact that the principal last minute insurer against the Budget details which did, in fact, come off was a personal friend of Mr J.H. Thomas, Colonial Sec., and his son L. Thomas, who actually effected the insurance for the man, Sir A. Butt, M.P. Very unhappy thing.

Was rung up fairly early this morning by Mr Stanley to ask if I would care to go with him to the Royal Tournament on Saturday. Very decent of him. Had lunch with the Mater and Pater, after which the Mater went over to Joan’s to keep Thomasina while Joan took Annabelle to be vaccinated.

Had the Ekco man in about the wireless a/c. Fortunately I had sent it.

After dinner took an hour’s walk over Hanger Hill and felt the fresher for it.

Today we have done without the dining room fire and soon the drawing room one will go also, I expect.

The evidence continues to pile up in the Court of Investigation of direct leakage from the Cabinet itself.

Today’s sensation is :- Baron Aloisi refused to have the Abyssinian member at the League of Nations meeting, but was severely overruled by Mr Eden as chairman, whereupon Aloisi walked out and later, on instructions from Rome, the whole of the Italian delegation left Geneva.

Rose a little earlier and after lunch went down to the bank and boldly drew out the usual housekeeping allowance and got away with it without question, although this will bring us overdrawn again. Home for tea and then out for a stroll to Hanger Hill bridge, where I saw the GWR streamlined engine, King Henry VIII.

We had dinner splendidly early tonight, so afterwards I took a long walk, and called on Kidd for two or three minutes. Home again and meant to put in a long spell on the Rocket, but sat talking steam, locos. With the Pater until 1.30, so have done very little.

The Budget Tribunal continues to implicate poor old Mr J.H. Thomas.
Broke parts of a tooth tonight and have had the unpleasant job of filing the sharpness off the stump. I’m afraid I swallowed a bit.

Up for breakfast this morning at 11 to join the Mater and the Aunts who, by the way, brought me a packet of cigarettes. God bless them, cigarettes to breakfast these days, ye gods!

Busy till after tea, then took Joan and the youngsters home (they were here for tea and both looked very fit and bonny), and so to the Library.

Mrs Stanley to dinner and thereafter Kidd and Eddie came in and we sailed two good matches, Kidd winning one and I the second. Mrs Stanley was very unlucky to lose the second. Walked to Horn Lane as usual.

Still not a word of any kind as regards business. Really, it is intolerable and I am afraid the strain of suspense is telling on the Pater.

The Budget trial drags on and really I begin to be sorry for J.H. Thomas. I begin to doubt if he really did tell any secrets, and it seems as if his Cabinet colleagues have not treated him with any great sympathy.

Was shocked to hear on the wireless tonight that Lord Allenby has died.

Rose rather late and lunched with the Mater and Pater; or rather while they lunched I breakfasted. Busy in the afternoon and after tea went to the Library and then to the aunts’. After dinner typed a letter for the Pater and took it to the air mail in Ealing. Have frittered away the evening working on two fountain pens, instead of getting on with the Rocket. Damn!

There is no change in the incredible and exasperating state here, not a word from anybody.

Little news of any kind. The Austrian Chancellor has dismissed Prince Starhemberg, Vice-Chan.; one of the fruits of Sir A (usten) C(hamberlain)’s little jaunt abroad?

An amusing mystery of the sea is developing too. A trawler, The Girl Pat, left Grimsby six weeks ago to fish in the North Sea. Nothing has been heard of her until this week, when she paid a flying visit to a small Spanish port, told some cock and bull story, and has again disappeared.

Actually, I’m writing this at 7 a.m. on Sunday, having like a fool gone and wasted the night reading and pottering about. Was up early too, for me that is, and breakfasted about 10.30.

Was very sorry to receive a letter from Daniel, telling me that he was ill once more and has to go into hospital in Plymouth shortly to have this damned ulcer cut out. Bloody awful luck.

Just before tea who should come in but Ine, the Doc. and Margaret, up by car on a flying visit. They all looked extremely fit. Ine, as usual, brought me some cigarettes. Thanks be.

Went shopping to Ealing and looked in at 15 on the way home. Then, off to meet Mr Stanley, who took me to the Royal Tournament at Olympia. A wonderful show, but some of the items I thought a trifle unnecessarily risky. But a great show. Home to coffee and then walked to Horn Lane.

Up for lunch, after which the Mater and I washed up and then hung about until tea time, when the No. 15 folk came over. Both the daughters were in great form and Thomasina a perfect wee de’il. Walked home with them later to return umbrellas as it started raining.