Home > A gentleman archaeologist and our prehistoric past 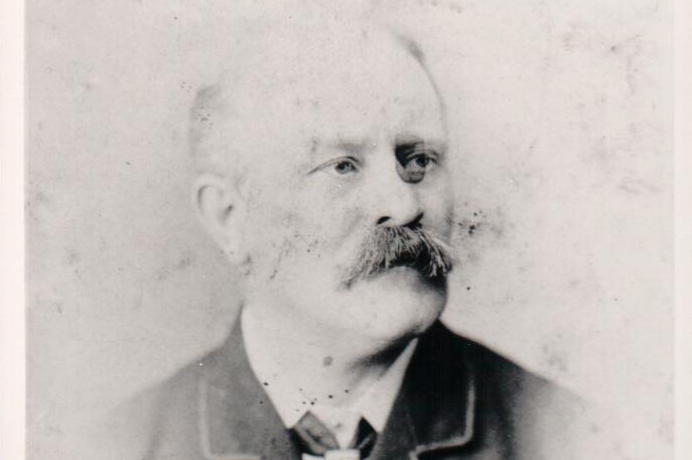 A gentleman archaeologist and our prehistoric past

John Allen Brown is not the most famous name in Ealing’s history but lived in Ealing for most of his adult life until his death in 1903 and greatly contributed to local society in the Victorian era, including as an archaeologist. His legacy is still with us.

Brown was a well-known figure in middle class circles. He was married and had five children and lived at 7 Kent Gardens (a house demolished in 1964) in north Ealing.

As a man who was wealthy enough not to have to work, he was able to pursue his interests unimpeded. In 1882 he wrote a letter to the local newspaper advocating that the council call a meeting to decide whether Ealing should have a public library, which were, then, relatively rare. This would be of use to all classes of people in order to better their education. After a brief campaign, a library was established in a now long demolished house on Ealing Green.

Brown became the library committee’s first permanent chairman. In this role he played an active part in the work of the library; writing annual reports, lobbying funding bodies and overseeing the move of the library from its first building to being located in the town hall on its opening in 1888. The Prince of Wales was to open the new town hall and Brown wanted to make a short address to him about the library. His fellow committee members disagreed and there were heated exchanges leading to Brown’s resignation. He later opposed the committee for banning popular but controversial novels.

He took solace from his arguments over the library in writing history. He had the first history of any district in the borough published: The Chronicles of Greenford Parva, which concerned Perivale’s history and mythology (not always distinguished). Prior to this he had had a book published about the archaeology of West Middlesex and also wrote learned articles about fossils and the Stone Age.

This brings us on to one of Brown’s passions in life: Ancient man. The vast amount of building work in what is now Greater London in the later 19th Century resulted in a great deal of digging and this in turn led workmen to discover numerous remains of prehistoric man, including many in Acton and Ealing.

Though Brown was an archaeologist, the actual hard graft would have been done by others. Archaeologists at this time rarely did any digging but would pay for what others found. Brown was an avid collector and he amassed numerous specimens which he displayed in his home and invited those interested to see them. Much of his collection is now in the British Museum.

Brown was also briefly an Ealing councillor in the 1880s and later a magistrate at Brentford Court (Ealing Court not then being in existence).

Apart from the usual drunks and dangerous drivers, on one instance he had to use his fluency in French to deal with a Frenchman who owned a performing bear that might have become a public danger.

When he died in 1903, Brown was buried at Perivale churchyard and there is an ornate tombstone to his memory still there.