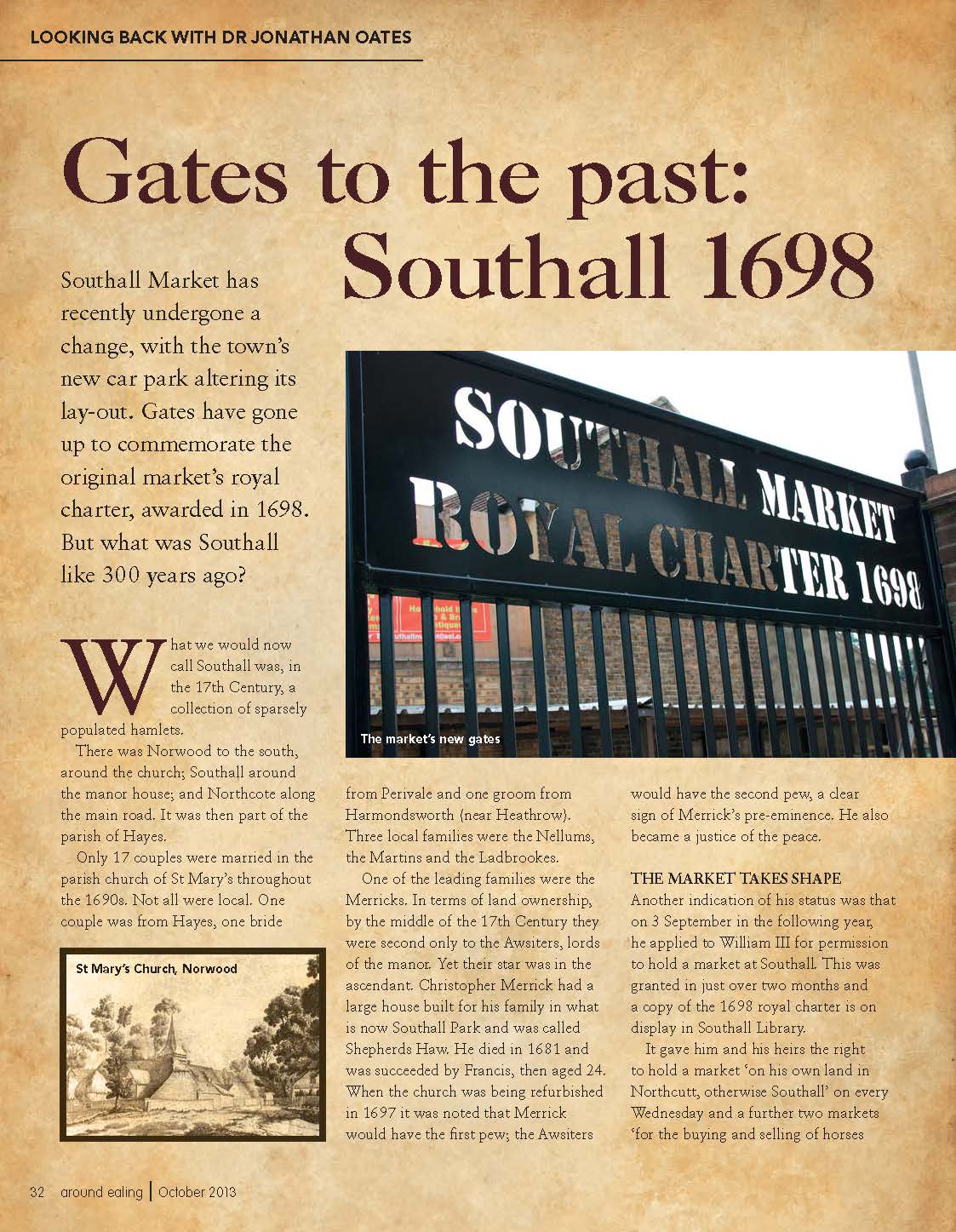 Southall Market has recently undergone a change, with the town’s new car park altering its lay-out. Gates have gone up to commemorate the original market’s royal charter, awarded in 1698.

What we would now call Southall was, in the 17th Century, a collection of sparsely populated hamlets.

There was Norwood to the south, around the church; Southall around the manor house; and Northcote along the main road. It was then part of the parish of Hayes.

Only 17 couples were married in the parish church of St Mary’s throughout the 1690s. Not all were local. One couple was from Hayes, one bride from Perivale and one groom from Harmondsworth (near Heathrow).

Three local families were the Nellums, the Martins and the Ladbrookes.

One of the leading families were the Merricks. In terms of land ownership, by the middle of the 17th Century they were second only to the Awsiters, lords of the manor. Yet their star was in the ascendant. Christopher Merrick had a large house built for his family in what is now Southall Park and was called Shepherds Haw. He died in 1681 and was succeeded by Francis, then aged 24.

When the church was being refurbished in 1697 it was noted that Merrick would have the first pew; the Awsiters would have the second pew, a clear sign of Merrick’s pre-eminence. He also became a justice of the peace.

Another indication of his status was that on 3 September in the following year, he applied to William III for permission to hold a market at Southall. This was granted in just over two months and a copy of the 1698 royal charter is on display in Southall Library.

It gave him and his heirs the right to hold a market ‘on his own land in Northcutt, otherwise Southall’ on every Wednesday and a further two markets ‘for the buying and selling of horses and all kinds of other beasts and cattle’, these to be held on the second Wednesday of October and on the Wednesday in Easter week. The right to hold a market was financially beneficial to the owner because he could charge buyers and sellers for the privilege of trading there. It also gave him the right to hold a court of pie powder which meant he could settle disputes, regulate trade and maintain order at the market.

However, the charter was of little personal benefit to Merrick. He died in 1702 (the same year as William III) and was succeeded by his son, John. Although John died without a son in 1749 the family name lives on as a street called Merrick Road, named as such in 1983, as well as there being memorials in the parish church.

HOW THE OTHER HALF LIVED

It is important to remember the less fortunate as well as the rich; the poor book covering 1698 refers to regular monthly pensions being given to poor widows. Others helped were one Richard Wight who was given money for shirts, trousers and shoes; and Robert Nicholls, the recipient of five shillings because he had been ill with smallpox.

A sign of the times in this year was a contribution of £1, 10 shillings to the ‘maymed soldiers hospitall’ (at Chelsea) – following the war with France that had been concluded in the previous year.
Then there was the ‘base born son’ of Sarah Hillier and John Thompson, who died before his first birthday. Although tragic, it is pleasant to record that the overseers were prepared to pay almost £12 towards the child being looked after, clothed, baptised and buried.

Originally appeared in Around Ealing October 2013