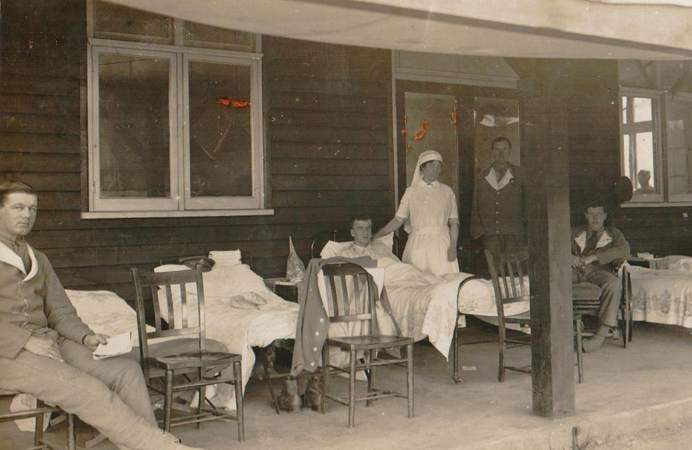 Women were debarred from serving in the armed forces in any capacity in the First World War, writes Dr Jonathan Oates. However, there was much additional work to be done in wartime and with far less men to do it, some women began to take on these tasks, some which had been traditionally male preserves.

Hospital work was a major concern and local hospitals and other buildings, such as the Maypole Institute in Southall, began to take in casualties of the war. The latter was titled the Ealing War Auxiliary Hospital (see picture at top of page). Many women were trained as nurses and assisted the surgeons in healing wounded soldiers.

Number 3 Montpelier Road had, by 1915, opened as a 51-bed hospital for British soldiers, recognised as such by the War Office. Its matron was Mrs Humphreys. This latter was a convalescent hospital for men recovering from injuries, rather than those needing surgery.

The first woman in Ealing to be enrolled in the police was Miss Collinson of Forge Cottages, Ealing Green. The Women Police Volunteers had been formed in 1915. They were uniformed and went on patrols of railway termini and parks. It was thought that they could do useful work among women and children. Yet they had no power to make arrests and their work was limited.

Munitions work in factories in Acton and the new shell making factory in Perivale were attractive to working class women, for they offered higher wages and more flexibility than the traditional domestic work as servants. However, it was dangerous. Two young women were killed in accidents on these factories in Acton, in 1916 and 1918. You can read the story of Miss Harman, whose name is listed on Ealing’s War Memorial (the only woman there).

Women also worked on the land, as the Acton Ladies’ Allotment group was formed in 1916 and there was the Ealing Women’s Agricultural Committee, which aimed to recruit women into farming jobs.

A number of new organisations were founded in the war to help servicemen and refugees. Women were central in the organisation and running of these.

In 1915 the Ealing War Dressings Association was founded, with Mrs Edith Brookman as the organiser. The women in this case aimed to make additional bandaging and other items of use to wounded soldiers.

There was also a Ladies Needlework Association where women made garments for needy refugees. Funding for these came in part from concerts held for the paying public, with women organising and performing in these.

A branch of the French Red Cross was formed in Ealing by 1916 and they worked to make underwear for French soldiers. Another way of fundraising, this time for the Red Cross, was by charity tennis matches, played by Mrs Lambert Chambers, Ealing resident and seven times Wimbledon champion (who also assisted in hospital work).