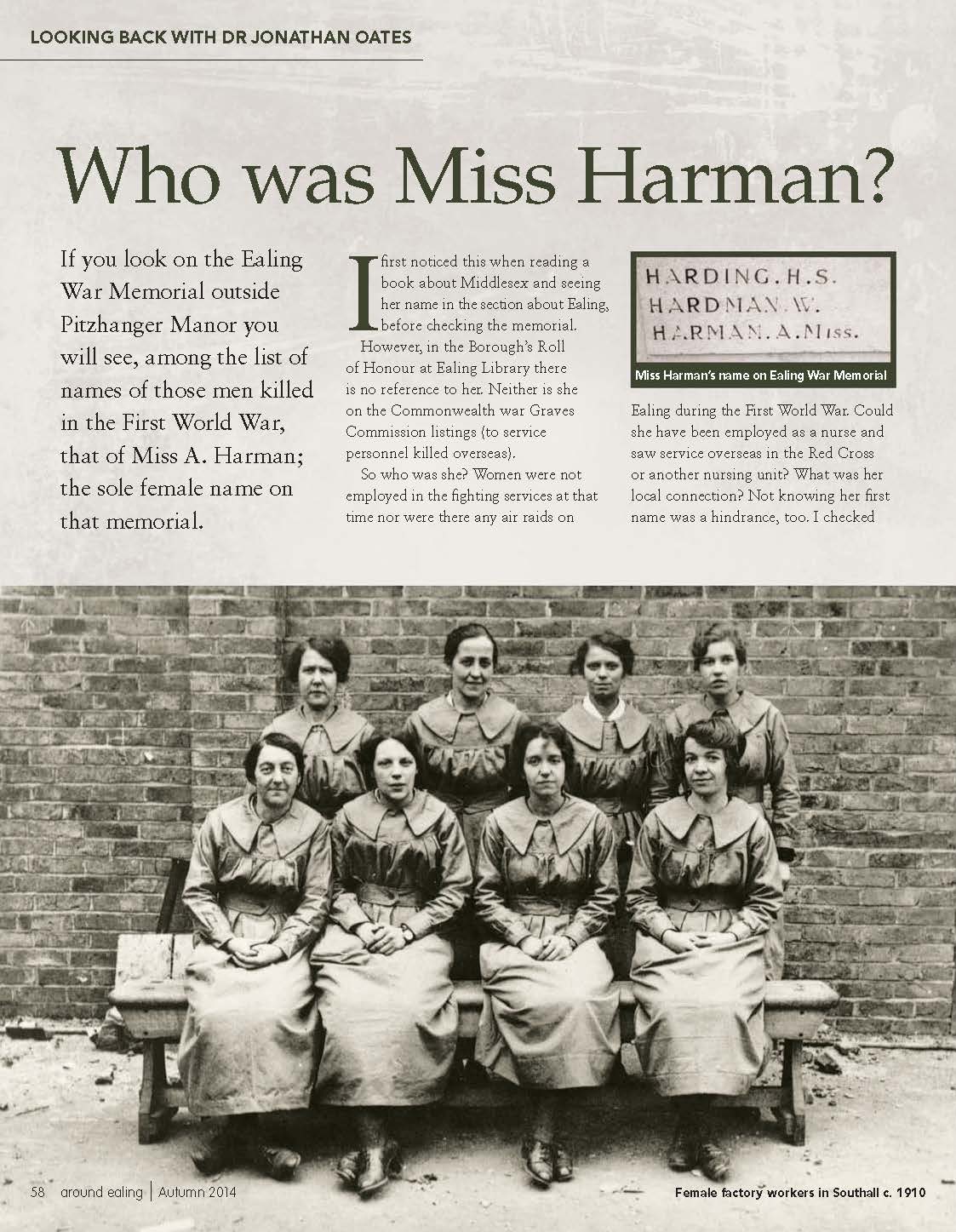 If you look on the Ealing War Memorial outside Pitzhanger Manor you will see, among the list of names of those men killed in the First World War, that of Miss A. Harman; the sole female name on that memorial. Dr Jonathan Oates investigated:

I first noticed this when reading a book about Middlesex and seeing her name in the section about Ealing, before checking the memorial.

However, in the borough’s roll of honour at Ealing Library there is no reference to her. Neither is she on the Commonwealth War Graves Commission listings (to service personnel killed overseas).

So who was she? Women were not employed in the fighting services at that time nor were there any air raids on Ealing during the First World War. Could she have been employed as a nurse and saw service overseas in the Red Cross or another nursing unit? What was her local connection? Not knowing her first name was a hindrance, too.

I checked the 1911 census and found three possible contenders, two of whom were young unmarried women, one a servant and one of no occupation. Perhaps one of these might have been the lady in question? Or could it have been someone who moved to the district after 1911?

Eventually I checked the local newspapers. The Middlesex County Times was one of Ealing’s newspapers at that time and eventually it revealed the identity and tragic circumstances of the death of Miss A. Harman.

Her name was Alice Maud Harman, aged 24 and who lived with her parents and four siblings at 1 Glenfield Road in West Ealing. In 1911 she had been employed as a servant.

Like many women, she had responded to the needs of war by working in a munitions factory from 4
November 1916.

She was employed at Messrs H. Llewellyn Dent and Co., an engineering works located at Warple
Way in Acton.

On 23 December she was taking her tea break, at about 10.20am. Unfortunately, she was still wearing her oily overalls when she was making coffee on the gas cooker and her clothing caught fire.

Her own attempts to douse the flames were unsuccessful. Mr Mills, the foreman, used a fire extinguisher but the flames had taken too great a hold for it to be effective. Finally another employee, seeing a pail of clear liquid, poured this over her. It was only then that it was realised that this was paraffin, not water. The tragedy was heightened by her death coming but two days before Christmas.

The inquest decreed that this was a case of accidental death. The funeral was well attended and took place a week later, the service being at St Mary’s Church. Alice had been a regular worshipper at St Paul’s Church and the vicar said that she had led an exemplary life and her death would be much felt. She was buried at Ealing Cemetery amidst a multitude of floral tributes.

Another of the war’s local female casualties was Dorothy Maude Mary Crowther, aged 16, who was killed in an explosion in an Acton munitions factory in 1918.

This originally appeared in Around Ealing autumn 2014