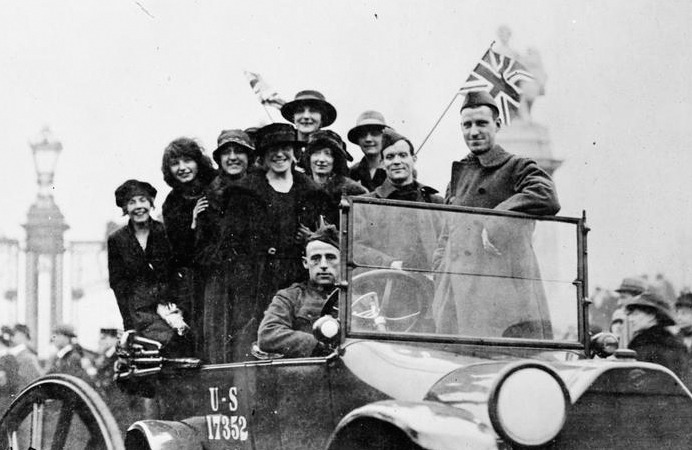 Dr Jonathan Oates concludes our series on the First World War by reflecting on what happened locally when reports of a peace treaty being signed began to filter through.

“Can I ever forget the scenes that followed when at 11 o’clock on 11th November 1918 news came through that an armistice had been signed? All work stopped. Cheering and singing some made their way to the Hospital…The celebrations continued well into the night.”

So wrote Richard Meads of Southall in his memoirs.

The event he referred to was the end of the First World War, which had seen the triumph of the Western Allies (principally Britain, France and their empires, Italy, Belgium and America) against the Central Powers (Principally Germany, Austria-Hungary and the Ottoman Empire) in a war that had begun in August 1914.

It was known that the allied forces were pushing back their enemy at all points on the Western Front and the war had once again become one of movement rather than fairly static trench warfare, so it was not an entire surprise.

Indeed, on Monday morning of 11 November 1918, most people knew that an armistice was planned to be signed at noon. Only four more hours of war. There were few pessimists. Even so, there was tension in the air, as Ealing’s newspaper reported:

“Soon after nine it began to be widespread, ‘The armistice is signed’. The majority shrugged their shoulders, answered sceptically and went their ways. ‘Heard it before – heard it yesterday’ they replied. So the minutes ticked on, and the rumour became more persistent. ‘It’ll come alight and we shall see it in the evening papers’. This was the general feeling and people were content to wait.”

‘It was as though a great magician had waved his wand’

But then 11am came and the news spread like wildfire. The newspaper describes the scenes: “At eleven, however, the great news burst out. With the crash of maroons and the like sounding of hooters, reinforced by an ever growing volume of other noises, which gradually rose to a tremendous roar, the glad tidings were proclaimed.

“People rushed from the shops and from their houses, joined in the cheers of the gathering multitude, and rushed in again to put out their flags. In a few moments the scene was transformed, and colours flew from every window and from ever flag staff.

“It was as though a great magician had waved his wand, as indeed He had, and all things were made bright for the festival of liberty and joy.

“The scenes were indescribable. The great burden of more than four years’ agony was lifted and loved ones were safe again. People laughed, cried, cheered and sang almost in one breath. It was a time of delirious joy, and persons who had never met before laughed and chatted with one another, all bound by one common feeling of gratitude and thankfulness.”

Schools and businesses closed and most people were on holiday for the rest of the day, and in some cases the next. Churches were packed with people attending special thanksgiving services. Church bells rang. There was a major civic gathering outside Ealing Town Hall where the town’s leaders, the mayor, the MP and the vicar, addressed the multitude present and there followed communal singing.

Thousands of people, in fact, met in the rain outside Ealing Town Hall at 7pm. The building had been lit up with lamps, a large union flag had been hoisted above the building and a platform for the dignitaries constructed. Among the crowds were wounded soldiers, who rejoiced, and were cheered in the streets themselves.

Some people went to central London for celebrations.

Despite the masses in the streets, people were happy but calm. And, for the first time in years, there was no longer any need for lights to be turned off at the coming of darkness.

During the war, lights had been blacked out because of concerns about zeppelin and aircraft bombing raids. No such prohibition was in force on 11 November and on that Monday night it was possible to see one’s way home for the first time in years. The Borough Surveyor had to have the paint removed from the borough’s lights and this would take a long time because of the present labour shortage. Before the thanksgiving service at St. Paul’s that evening the churchwardens removed shades from more than 100 lights there ‘and the effect there was quite dazzling’.

Flags were in great demand. One householder hung a khaki coat from his first floor window, with the label ‘Going cheap.’ Hundreds of flags were flown in Northfields within 10 minutes of the armistice being known about. Apparently 50 of the 1,000 men from Northfields who had enlisted had been killed. A lot more flags were available on the next day, with staves and bunting being more available on an hourly rate.

There were many church services held. At Greenford it was stated: “The church bells at Greenford were rung, and bunting began to appear, within a few minutes of the time at which the Armistice was declared in London. The Rector held a thanksgiving service in the evening, and the church being filled, notwithstanding the weather by people from all parts of the widely scattered parish. The singing was pleasantly and cheerfully led by a large choir of children in the gallery, and the service was heartily and attentively shared by the large congregation.”

Most businesses closed down at noon. At Wilkinson’s in Acton, which had produced hundreds of thousands of bayonets, swords and other military equipment, there was immense cheering when the flag went up to denote peace. The employees left work in the afternoon. Two thirds were back on the Tuesday. At Ossions, a speech was made and at Napiers, men came out into the yards and gave three cheers. Few worked on the Monday afternoon and many did not return until Wednesday. Vandervells was closed until that day. At one factory in Park Royal the place was closed for the whole week. The only factory where this did not happen was the Filling Factory which made shells. Here there were speeches by officials and workers in the canteen and there was a works dance on the Tuesday night, to which soldier friends were invited.

There were other rejoicings elsewhere. At the Conservative Club at Westfield House there was much singing and playing the piano by members, and the steward recollected that he had never known anything similar at the club in all his long experience.

The day after the armistice did not see a return to normal conditions, but rejoicing was more restrained. On the Wednesday evening, the Hanwell Church Lads’ Brigade marched through the town, playing their music.

The local press declared that the armistice was an event of huge historical importance, with the editorial of the Southall-Norwood Gazette stating: “There is small risk, if any, in saying that of all events in the world’s recorded history, apart from those transcendent ones especially recorded in Holy Writ, the Armistice signed last Monday marks the greatest with a lonely loftiness of grandeur.”