Home > First World War: ‘Hell – there is no other word’ 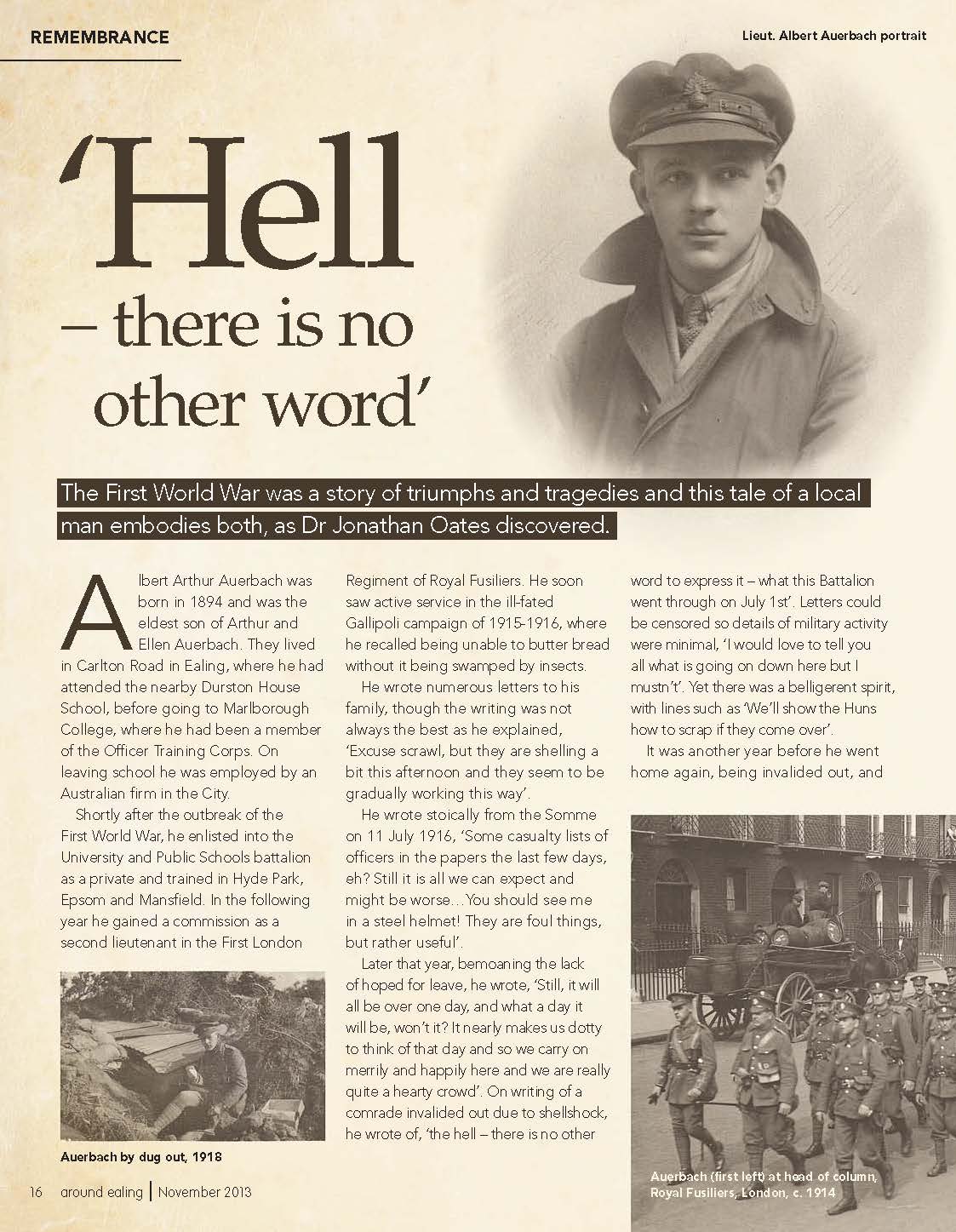 First World War: ‘Hell – there is no other word’

The First World War was a story of triumphs and tragedies and this tale of a local man embodies both, as Dr Jonathan Oates discovered.

Albert Arthur Auerbach was born in 1894 and was the eldest son of Arthur and Ellen Auerbach. They lived in Carlton Road in Ealing, where he had attended the nearby Durston House School, before going to Marlborough College, where he had been a member of the Officer Training Corps. On leaving school he was employed by an Australian firm in the City.

Shortly after the outbreak of the First World War, he enlisted into the University and Public Schools battalion as a private and trained in Hyde Park, Epsom and Mansfield. In the following year he gained a commission as a second lieutenant in the First London Regiment of Royal Fusiliers. He soon saw active service in the ill-fated Gallipoli campaign of 1915-1916, where he recalled being unable to butter bread without it being swamped by insects.

He wrote numerous letters to his family, though the writing was not always the best as he explained, ‘Excuse scrawl, but they are shelling a bit this afternoon and they seem to be gradually working this way’.

He wrote stoically from the Somme on 11 July 1916, ‘Some casualty lists of officers in the papers the last few days, eh? Still it is all we can expect and might be worse…You should see me in a steel helmet! They are foul things, but rather useful’.

Later that year, bemoaning the lack of hoped for leave, he wrote, ‘Still, it will all be over one day, and what a day it will be, won’t it? It nearly makes us dotty to think of that day and so we carry on merrily and happily here and we are really quite a hearty crowd’. On writing of a comrade invalided out due to shellshock, he wrote of, ‘the hell – there is no other word to express it – what this Battalion went through on July 1st’.

Letters could be censored so details of military activity were minimal, ‘I would love to tell you all what is going on down here but I mustn’t’. Yet there was a belligerent spirit, with lines such as ‘We’ll show the Huns how to scrap if they come over’.

It was another year before he went home again, being invalided out, and for some weeks he was in the London General Hospital at Gray’s Inn Road. Later in 1917 he was sent to Torquay and then to Blackdown Camp, Aldershot, as a gas offi cer. In this year he was promoted to First Lieutenant.

The German Army made their last offensive in 1918. Auerbach left for France with the 3rd Regiment of Fusiliers on 20 June. In July he related the coincidence that he had met Captain Taylor, who lived at 38 Castlebar Road, who inquired after his sister, Lucy.

On 18 August 1918 he wrote, ‘I don’t know what is going to happen to us, but we have a good idea as we have been made up to over strength with huge drafts of men and officers’. This was to be his final letter. He was killed outright by a shell on the morning of 1 September, four years to the day of his enlistment. He was awarded a posthumous Military Cross for conspicuous bravery. A little over two months later Germany surrendered.

This article was constructed from letters and photos loaned by Patricia Aubrey, neice of Albert Auerbach, MC.
Patricia said: “Albert was a real hero, but most of all his heart was in Ealing the whole time he was at war; and I am sure he is looking down, pleased that his story is in a local magazine.”