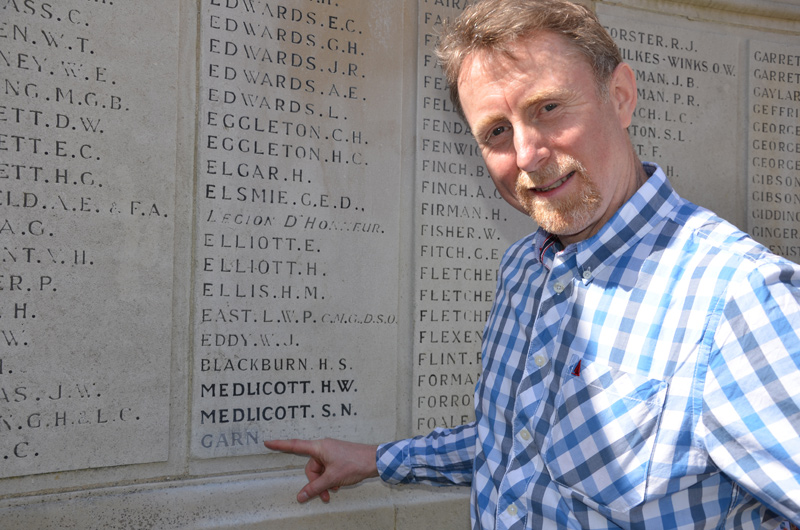 A second soldier who died in the First World War has been recognised in Ealing almost a century after his death.

Following on from Herbert Crook, whose name was added to Ealing War Memorial by the council earlier this year, another fallen hero who was missing from the list has been etched on the memorial wall on Ealing Green.

Serjeant John Harold Garnham, of the Royal Irish Regiment, was from Ealing. He was killed during an offensive near Ypres in the closing weeks of the war, as the allied forces made a final push to defeat the German army. In fact, he died on 14 October 1918, less than a month before the official cessation of combat on 11 November.

Thanks to research by his great-nephew Ian Garnham, the omission of John’s name has been rectified. Although he is listed close to the battlefield where he fell, he was one of many British troops whose names did not make it on to memorials back home directly after the war ended – perhaps lost in the administrative maze and among the sheer numbers of unidentified war dead.

Serjeant Garnham’s story threw up a shock for the family. When Ian’s son Nathan was studying for his GCSEs the family took a trip to the battlefield in Belgium where John fell, and the Hooge Crater Cemetery.

A log book at the cemetery contains a roll call of the names of the fallen soldiers who died there and, to their surprise, the family saw an Ealing address next to Serjeant Garnham’s name: Drayton Grove, West Ealing. Although an Ealing resident, Ian actually grew up in Jersey and his father had never mentioned a past family connection to Ealing.

Ian said: “It’s extraordinary to think we have come full circle and that I moved to live in a house just a few hundred yards from the address where my great uncle and great-grandmother lived, completely unknowingly. It is very heart-warming to finally be able to redress my great uncle’s lack of recognition after all this time, 97 years.”

When the story of Herbert Crook was first published by Around Ealing Extra earlier this year, a number of newspapers and websites picked up the story and it has prompted several other families to come forward.

Herbert, from Ealing, died while fighting on one of the First World War’s most notorious battlefields, the Somme. His nephew Stuart Crook and other members of the family were present when Herbert’s name was etched on to the memorial.

Originally appeared in Around Ealing Summer 2015