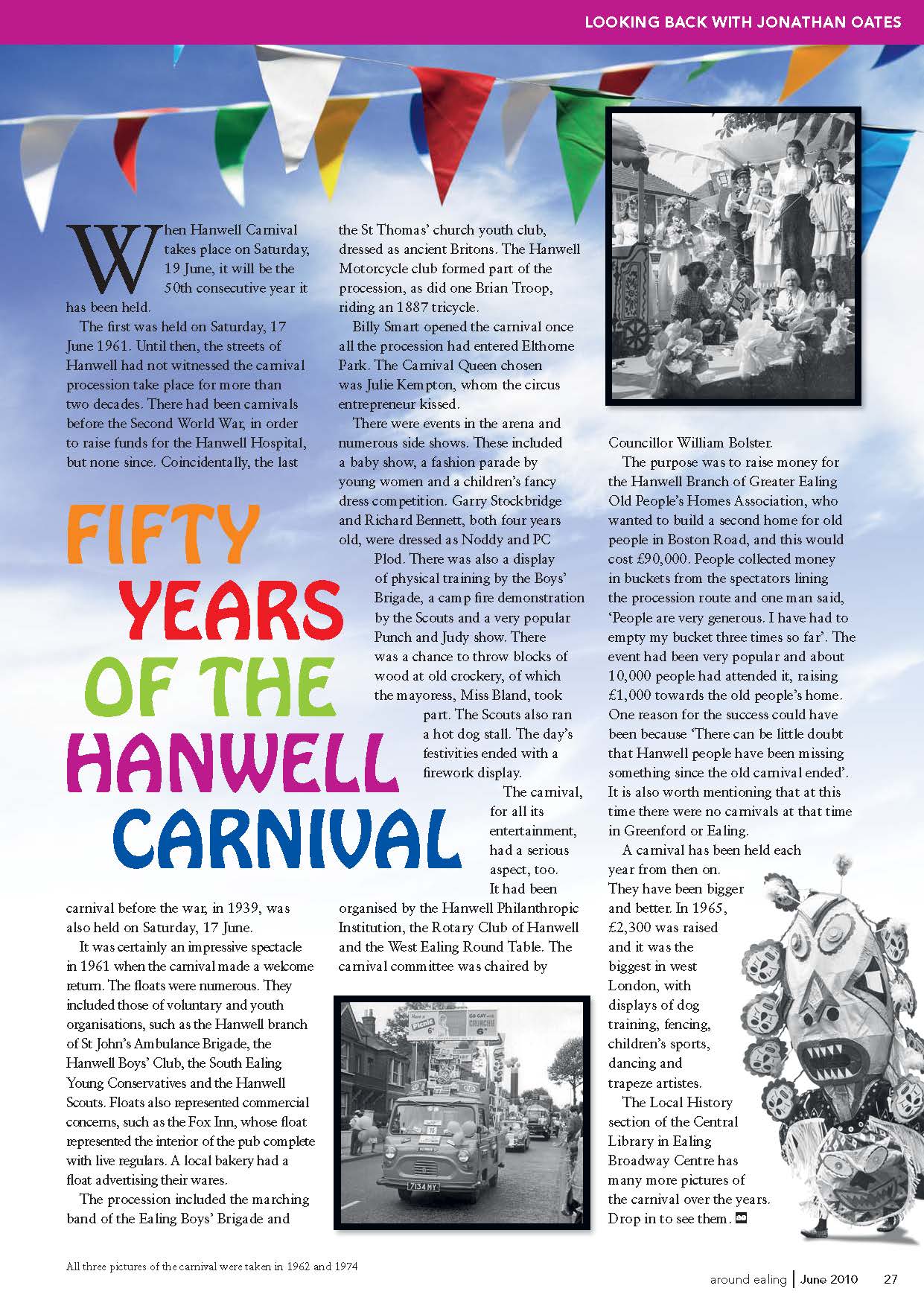 Fifty years of the Hanwell Carnival

When Hanwell Carnival takes place on Saturday, 19 June, it will be the 50th consecutive year it has been held.

The first was held on Saturday, 17 June 1961. Until then, the streets of Hanwell had not witnessed the carnival procession take place for more than two decades. There had been carnivals before the Second World War, in order to raise funds for the Hanwell Hospital, but none since. Coincidentally, the last carnival before the war, in 1939, was also held on Saturday, 17 June.

It was certainly an impressive spectacle in 1961 when the carnival made a welcome return. The floats were numerous. They included those of voluntary and youth organisations, such as the Hanwell branch of St John’s Ambulance Brigade, the Hanwell Boys’ Club, the South Ealing Young Conservatives and the Hanwell Scouts. Floats also represented commercial concerns, such as the Fox Inn, whose float represented the interior of the pub complete with live regulars. A local bakery had a float advertising their wares.

The procession included the marching band of the Ealing Boys’ Brigade and the St Thomas’ church youth club, dressed as ancient Britons. The Hanwell Motorcycle club formed part of the procession, as did one Brian Troop, riding an 1887 tricycle.

Billy Smart opened the carnival once all the procession had entered Elthorne Park. The Carnival Queen chosen was Julie Kempton, whom the circus entrepreneur kissed.

There were events in the arena and numerous side shows. These included a baby show, a fashion parade by young women and a children’s fancy dress competition. Garry Stockbridge and Richard Bennett, both four years old, were dressed as Noddy and PC Plod. There was also a display of physical training by the Boys’ Brigade, a camp fire demonstration by the Scouts and a very popular
Punch and Judy show. There was a chance to throw blocks of wood at old crockery, of which the mayoress, Miss Bland, took part. The Scouts also ran a hot dog stall. The day’s festivities ended with a firework display.

The carnival, for all its entertainment, had a serious aspect, too.

It had been organised by the Hanwell Philanthropic Institution, the Rotary Club of Hanwell and the West Ealing Round Table. The carnival committee was chaired by Councillor William Bolster. The purpose was to raise money for the Hanwell Branch of Greater Ealing Old People’s Homes Association, which wanted to build a second home for old people in Boston Road, and this would cost £90,000. People collected money in buckets from the spectators lining the procession route and one man said, ‘People are very generous. I have had to empty my bucket three times so far’. The event had been very popular and about 10,000 people had attended it, raising £1,000 towards the old people’s home.

One reason for the success could have been because ‘There can be little doubt that Hanwell people have been missing something since the old carnival ended’. It is also worth mentioning that at this time there were no carnivals at that time in Greenford or Ealing.

A carnival has been held each year from then on. They have been bigger and better. In 1965, £2,300 was raised and it was the biggest in west London, with displays of dog training, fencing, children’s sports, dancing and trapeze artistes.

The Local History section of the Central Library in Ealing Broadway Centre has many more pictures of the carnival over the years. Drop in to see them.

This originally appeared in Around Ealing June 2010