Home > European refugees in Ealing during the last century 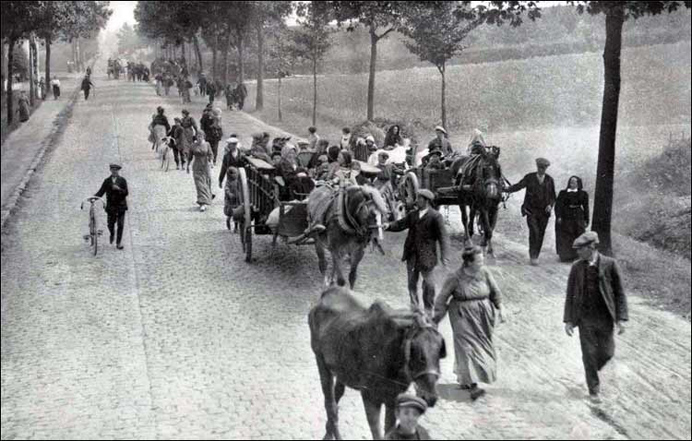 European refugees in Ealing during the last century

London’s population has always been one of comings and goings and migration and immigration; but in the last century, Ealing welcomed a number of our European neighbours who had been dispossessed of their homes by war and upheaval to become refugees. Dr Jonathan Oates explains further.

Wars and political upheavals in 20th Century Europe have led to some people fleeing such violence to Britain. Some arrived in Ealing. They tend to be overlooked because for most of them their stay was only temporary and so established no new communities as later refugees who stayed permanently tended to do.

The century’s two world wars led to Belgians and Dutch fleeing the invading German armies in both 1914 and in 1940. Several hundred Belgians arrived locally during both wars (we wrote previously about those who came over in 1914). A number of voluntary organisations, as well as churches, were formed to assist in Belgian relief and these were encouraged by Ealing Council. Empty houses were rented and furnished and used as hostels for the refugees. Additional help was given, but able-bodied refugees were encouraged to go out to work and many Belgian men joined the Belgian armed forces. Lady Humphreys, the Belgian-born wife of a prominent Ealing barrister, was the leading force in the local attempts to help the Belgians. Other places in the locality did likewise in helping. There was a great deal of sympathy for these people who were fleeing from both their and Britain’s enemies. In 1919 and 1945 almost all these refugees returned home.

It was more complex in the 1930s, in times of general peace. The civil war in Spain in 1936-1939 led to several thousand Basque refugees, mostly children, arriving in Britain. A number of local people wanted to help and made collections for them to supply basic needs. A concert in aid of funds for the Basques was held in Ealing and in Acton collections were held. Yet others, however, were less keen on such aid, citing the fact that there was widespread child poverty and unemployment in Britain and that these should have first call on charity

Then, in 1938-1939, following the upsurge of attacks on the Jews in Germany, some Jewish children from Germany and Austria came to Britain. However, owing to government uncertainty over the situation, they had to have a British sponsor who would support them financially if necessary. A house was rented in Montpelier Road for a number of Jewish boys. This was on the understanding that they would emigrate once they had reached adulthood and had learnt a trade. Curiously though, Czech refugees fleeing at the same time for the same reasons were generally dealt with more sympathetically and it was even easier to raise donations for them after the German invasion of that country.

In 1940 there were far more refugees from Europe as the war raged; and this time the support offered was far more organised by government. There seems to have been enthusiastic assistance locally – with a significant volunteer effort. A Polish school was even briefly established in north Ealing and Belgians in Southall became employed in local factories.

Even after the Second World War there were other crises in Europe that led to refugees being in flight. The Communist coup in Czechoslovakia in 1948 and the Soviet invasion of Hungary in 1956 led to further movements of people. Czechs and Hungarians arrived in Ealing and money was given by local firms and people to the Lord Mayor’s Fund for Hungarian Relief. One notable resident from Czechoslovakia was Dr Toufar who was Ealing’s Reference Librarian from 1950-1969, who we wrote about previously.

Dr Oates is to give a talk on this subject in much more detail at West Ealing Library on Thursday, 21 March at 6pm. Advance booking required (£3 for library members, £5 for non-members).