Home > Ealing and the Blitz 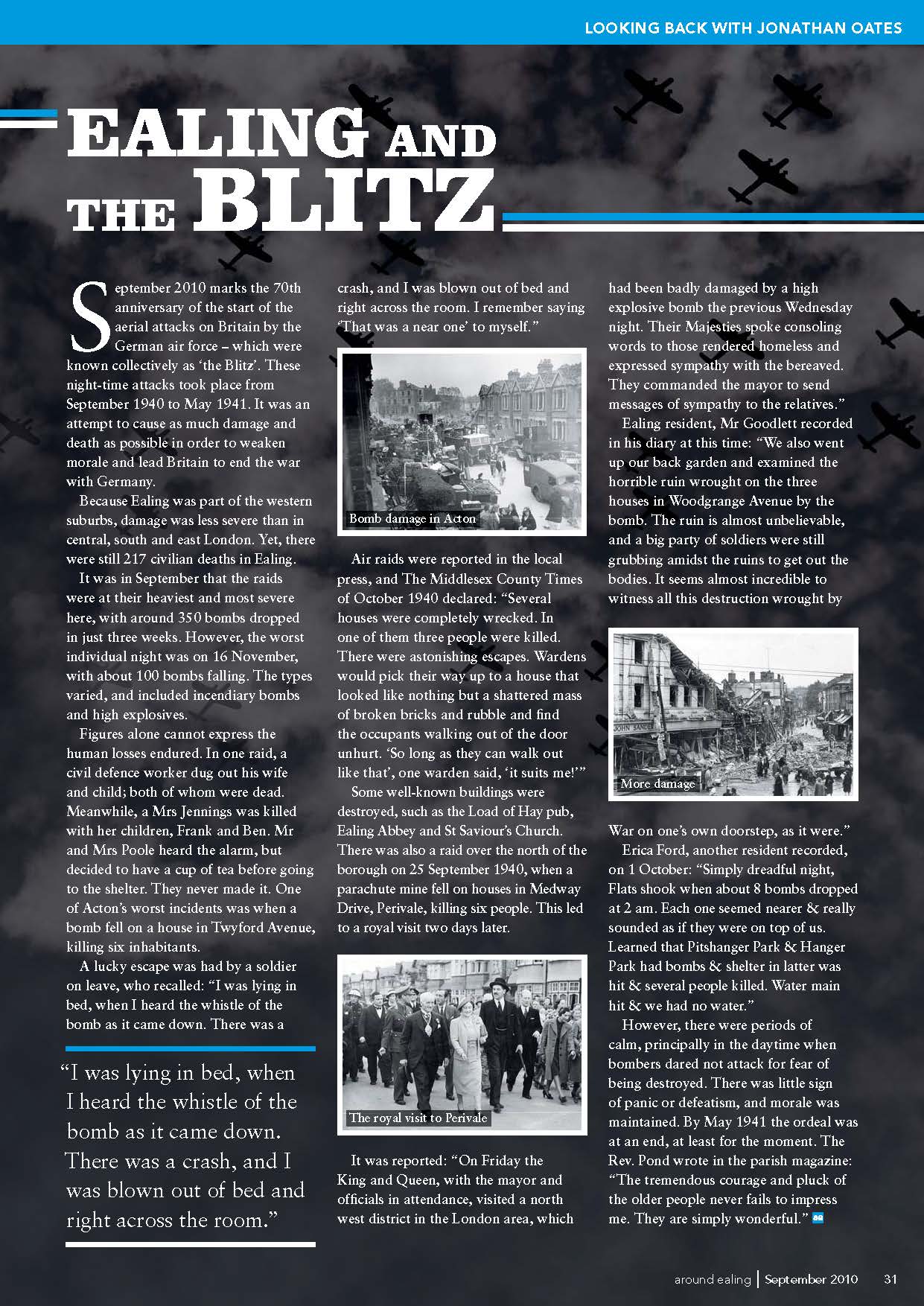 Ealing and the Blitz

September 2010 marks the 70th anniversary of the start of the aerial attacks on Britain by the German air force – which were known collectively as ‘the Blitz’.

These night-time attacks took place from September 1940 to May 1941. It was an attempt to cause as much damage and death as possible in order to weaken morale and lead Britain to end the war with Germany.

Because Ealing was part of the western suburbs, damage was less severe than in central, south and east London. Yet, there were still 217 civilian deaths in Ealing.

It was in September that the raids were at their heaviest and most severe here, with around 350 bombs dropped in just three weeks. However, the worst individual night was on 16 November, with about 100 bombs falling. The types varied, and included incendiary bombs and high explosives.

I was blown out of bed and right across the room

Figures alone cannot express the human losses endured. In one raid, a civil defence worker dug out his wife and child; both of whom were dead.

Meanwhile, a Mrs Jennings was killed with her children, Frank and Ben. Mr and Mrs Poole heard the alarm, but decided to have a cup of tea before going to the shelter. They never made it. One of Acton’s worst incidents was when a bomb fell on a house in Twyford Avenue, killing six inhabitants.

A lucky escape was had by a soldier on leave, who recalled: “I was lying in bed, when I heard the whistle of the bomb as it came down. There was a crash, and I was blown out of bed and right across the room. I remember saying ‘That was a near one’ to myself.”

Air raids were reported in the local press, and The Middlesex County Times of October 1940 declared: “Several houses were completely wrecked. In one of them three people were killed. There were astonishing escapes. Wardens would pick their way up to a house that looked like nothing but a shattered mass of broken bricks and rubble and find the occupants walking out of the door unhurt. ‘So long as they can walk out like that’, one warden said, ‘it suits me!’”

Some well-known buildings were destroyed, such as the Load of Hay pub, Ealing Abbey and St Saviour’s Church.

There was also a raid over the north of the borough on 25 September 1940, when a parachute mine fell on houses in Medway Drive, Perivale, killing six people. This led to a royal visit two days later.

It was reported: “On Friday the King and Queen, with the mayor and officials in attendance, visited a north west district in the London area, which had been badly damaged by a high explosive bomb the previous Wednesday night. Their Majesties spoke consoling words to those rendered homeless and expressed sympathy with the bereaved. They commanded the mayor to send messages of sympathy to the relatives.”

Ealing resident, Mr Goodlett recorded in his diary at this time: “We also went up our back garden and examined the horrible ruin wrought on the three houses in Woodgrange Avenue by the bomb. The ruin is almost unbelievable, and a big party of soldiers were still grubbing amidst the ruins to get out the bodies. It seems almost incredible to witness all this destruction wrought by War on one’s own doorstep, as it were.”

Erica Ford, another resident recorded, on 1 October: “Simply dreadful night, Flats shook when about 8 bombs dropped at 2am. Each one seemed nearer & really sounded as if they were on top of us. Learned that Pitshanger Park & Hanger Park had bombs & shelter in latter was hit & several people killed. Water main hit & we had no water.”

However, there were periods of calm, principally in the daytime when bombers dared not attack for fear of being destroyed. There was little sign of panic or defeatism, and morale was maintained. By May 1941 the ordeal was at an end, at least for the moment. The Rev. Pond wrote in the parish magazine: “The tremendous courage and pluck of the older people never fails to impress me. They are simply wonderful.”

Originally appeared in Around Ealing September 2010