Home > Dr Who and its links to the borough 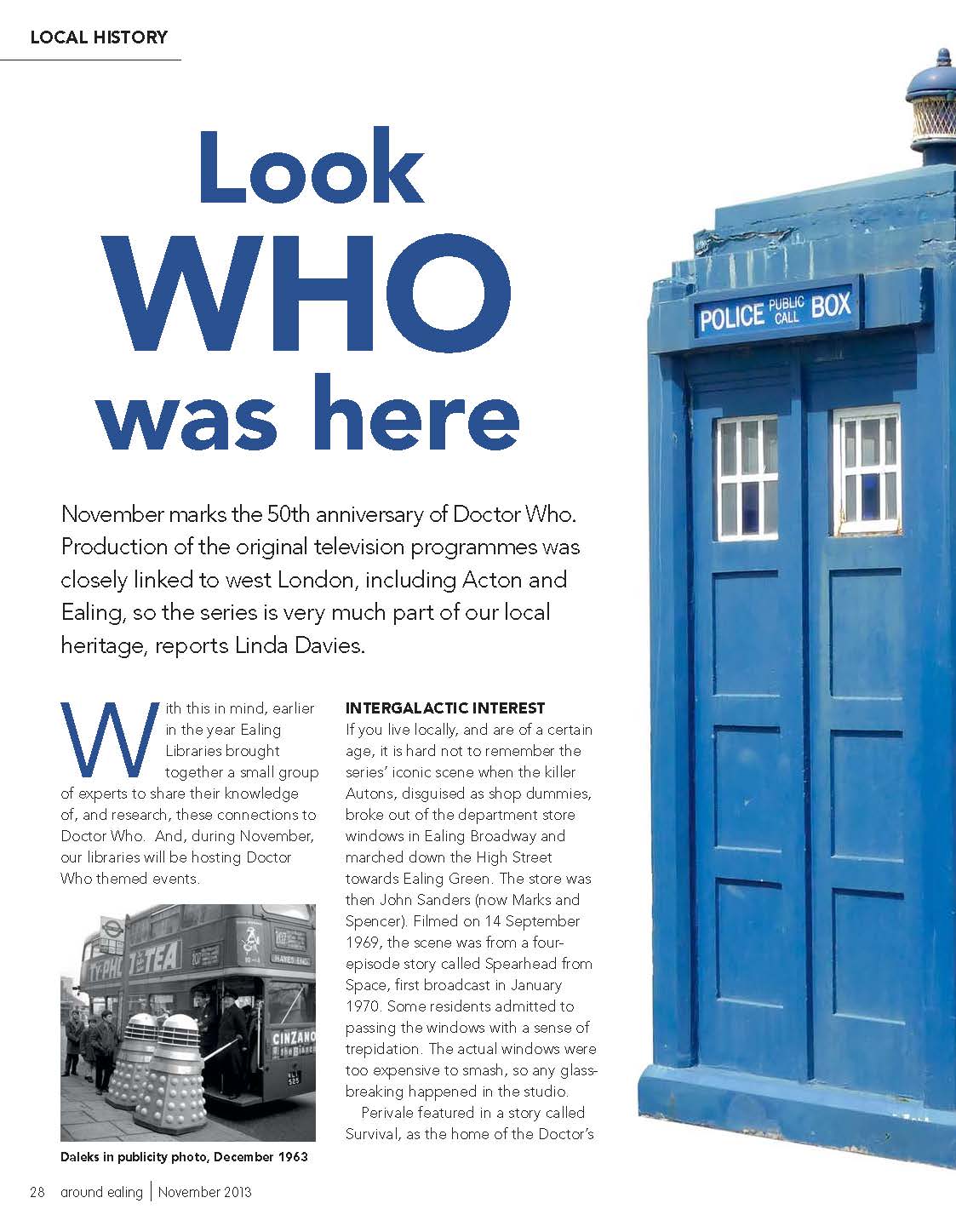 Dr Who and its links to the borough

November marks the 50th anniversary of Doctor Who. Production of the original television programmes was closely linked to west London, including Acton and Ealing, so the series is very much part of our local heritage, reports Linda Davies.

With this in mind, earlier in the year Ealing Libraries brought together a small group of experts to share their knowledge of, and research, these connections to Doctor Who. And, during November, our libraries will be hosting Doctor Who themed events.

If you live locally, and are of a certain age, it is hard not to remember the series’ iconic scene when the killer Autons, disguised as shop dummies, broke out of the department store windows in Ealing Broadway and marched down the High Street towards Ealing Green. The store was then John Sanders (now Marks and Spencer). Filmed on 14 September 1969, the scene was from a four-episode story called Spearhead from Space, first broadcast in January 1970. Some residents admitted to passing the windows with a sense of trepidation. The actual windows were too expensive to smash, so any glass breaking happened in the studio.

Perivale featured in a story called Survival, as the home of the Doctor’s assistant Ace, who asserts that ‘nothing ever happens in Perivale’ because it is so peaceful. Inevitably, they arrive to find that her old friends have vanished, having been transported to the planet of the Cheetah People. Filmed in June 1989, the action takes place in many local streets including Medway Drive, Woodhouse Avenue, Bleasdale Avenue and Colwyn Avenue, as well as Ealing Central Sports Ground and Horsenden Hill.

Other locations were used over the years, including Walpole Park and Villiers House (in Ealing Broadway), Drayton Court Hotel, Midhurst Road,Chamberlain Road and what is now Clementine Close in Northfields. The old Guinness brewery in Park Royal also featured in 1968.

Villiers House has another claim to fame because it used to house BBC Enterprises and, during a clear-out in 1983, some ‘missing’ Doctor Who episodes were discovered in a cupboard.

In fact, a number of BBC buildings were based in the borough, so many of the staff who worked on the series lived locally – and BBC TV Centre, and other key locations, were just across the border. During the 1960s, Ealing Studios was used for filming Doctor Who special effects. BBC sites in North Acton have also been important – for example, rehearsals were sometimes held at the Victoria Road building. Over the years various members of the cast took up residence in the borough. Sadly it was in Southall that actress Elisabeth Sladen died in 2011.

Despite filming switching to Cardiff for the modern series of Doctor Who, Ealing was still the fictional setting for the spin-off series Sarah Jane Adventures, with the heroine living there at the imaginary 13 Bannerman Road.

Daleks and other aliens are no strangers to the area because props for the series have often been stored locally. As early as October 1964 four of the first six daleks were being stored in Ealing.

Gunnersbury Park Museum even has a Doctor Who exhibit – a fibreglass mask for a Robot of Death from 1977.
The mask was designed by Elizabeth Waller, a BBC costume designer and long-time Ealing resident.

Originally appeared in Around Ealing November 2013