Home > A story too far? Dr Toufar – librarian and man of mystery 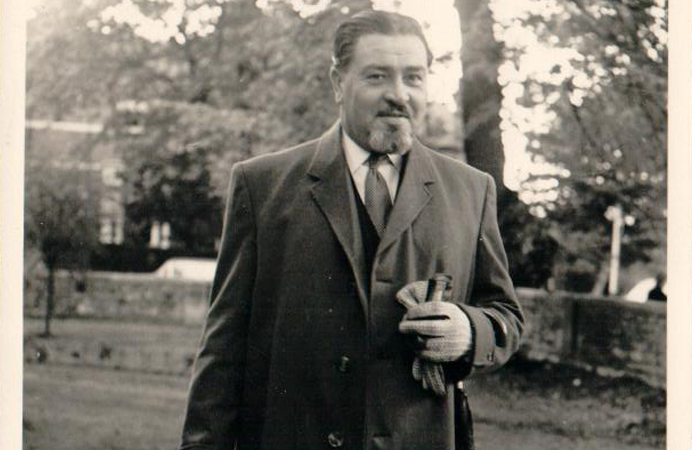 A story too far? Dr Toufar – librarian and man of mystery

From 1949-1969 Dr FA Toufar was employed as reference librarian at Ealing Central Library, then located in Pitzhanger Manor House, and he played an important role in the collection of local history. Dr Jonathan Oates, who himself is based at the modern equivalent of the same library and fills the role of borough archivist, explains how Dr Toufar cut a mysterious figure for his colleagues at the time.

Very little is known about Dr Toufar, not even his full name or when and where he died. He was a very smartly dressed man and a very intelligent one, as the picture of him and those who knew him can attest. Michael Gorman, then a junior librarian, noted that he was ‘The most interesting person who worked in Ealing Library when I was there’. Gorman described the doctor as often wearing a long dark overcoat, a beret and was well-built, dark-haired and imposing, giving the impression of being what he was, viz a European intellectual of the time.

Dr Toufar was probably born in the Austro-Hungarian Empire in about 1910 and, with the demise of that ancient European empire in 1918, he became a resident of a new country, Czechoslovakia. In 1950 it was stated that he had been head of a department in the Czech Ministry of Education. He also claimed to have been a personal friend and former associate of Dr Thomas Masaryk (1850-1937), an academic who became the first president of Czechoslovakia. Dr Toufar had a great admiration for Masaryk, as an honest, brave Czech liberal and democrat who had a profound distrust of Russia. Dr Toufar gave a lecture on his hero to the Ealing branch of the Historical Association to mark the centenary of Dr Masaryk’s birth. He told his listeners that if they sought peace and international understanding, they must read Masaryk’s writings and that it is better to heed great men late than never. He added that public life should be informed by the ethical principles of religion.

It is not known when Dr Toufar arrived in England but it seems that 1948 might be probable as that was the year that the Communist takeover of Czechoslovakia was complete. As a Czech patriot and anti-Communist, continued residence there would have been unsafe. One Father Joseph Toufar was executed in 1950 in that country, though it is unknown if there was any connection between the two.

It was in 1949 that the doctor was first employed by the Ealing Library service, first as a temporary assistant for six months, but by 1950 he became the reference librarian, a post held for nearly two decades until he presumably retired. He had a great interest in early printed books. Gorman wrote of him, ‘He had a great tolerance for anyone who came into his library with what he deemed to be a sincere interest in its holdings’. At this time the reference collection included the Local Collection, meaning the local history material for the borough. Dr Toufar was actively engaged in the collection of historical matter and the promotion of the local history in his adopted country. In 1959-1960 he gave a number of talks to Southall Local History Society and to various church groups. He also contributed to a regular column in the Middlesex County Times newspaper titled ’60 years ago’, featuring stories from the press of that vintage.

When the Greater Ealing Local History Society was formed in 1958 it was no surprise that Dr Toufar became its chairman. He also acted on behalf of the Middlesex Local History Council as adviser for inner West Middlesex. However, he wrote very little for publication except the newspaper articles already mentioned and a few pieces for the local history journal, including work on William Perkin and Dr Dodd. Towards the end of his library career he assisted in the transfer of the plaque of Thomas Huxley from Ealing Library to its new home at the Acton teaching college which bore the great scientist’s name.

Dr Toufar is listed as being resident at 9 Stanway Gardens, Acton, in 1962 and it is probable he had lived there in the previous decade, too. There is no reference to his death or a will in the indexes to these, so either he may have emigrated again, perhaps to the USA, or altered his name. It seems he never became a naturalised British citizen for his name is not visited in the electoral register at the address we know he resided at. It is unknown whether he was ever married or had children. It has been suggested that he left a wife in Czechoslovakia and was close to a woman in England.

This air of mystery is supported by a former colleague who recollected that Dr Toufar and his young library assistant often closeted themselves together away from the other staff of the library and were known to handle strange parcels, probably of rare printed books or unique manuscripts. On the other hand he could be sociable, as evidenced by his attending the wedding of the daughter of a library colleague.