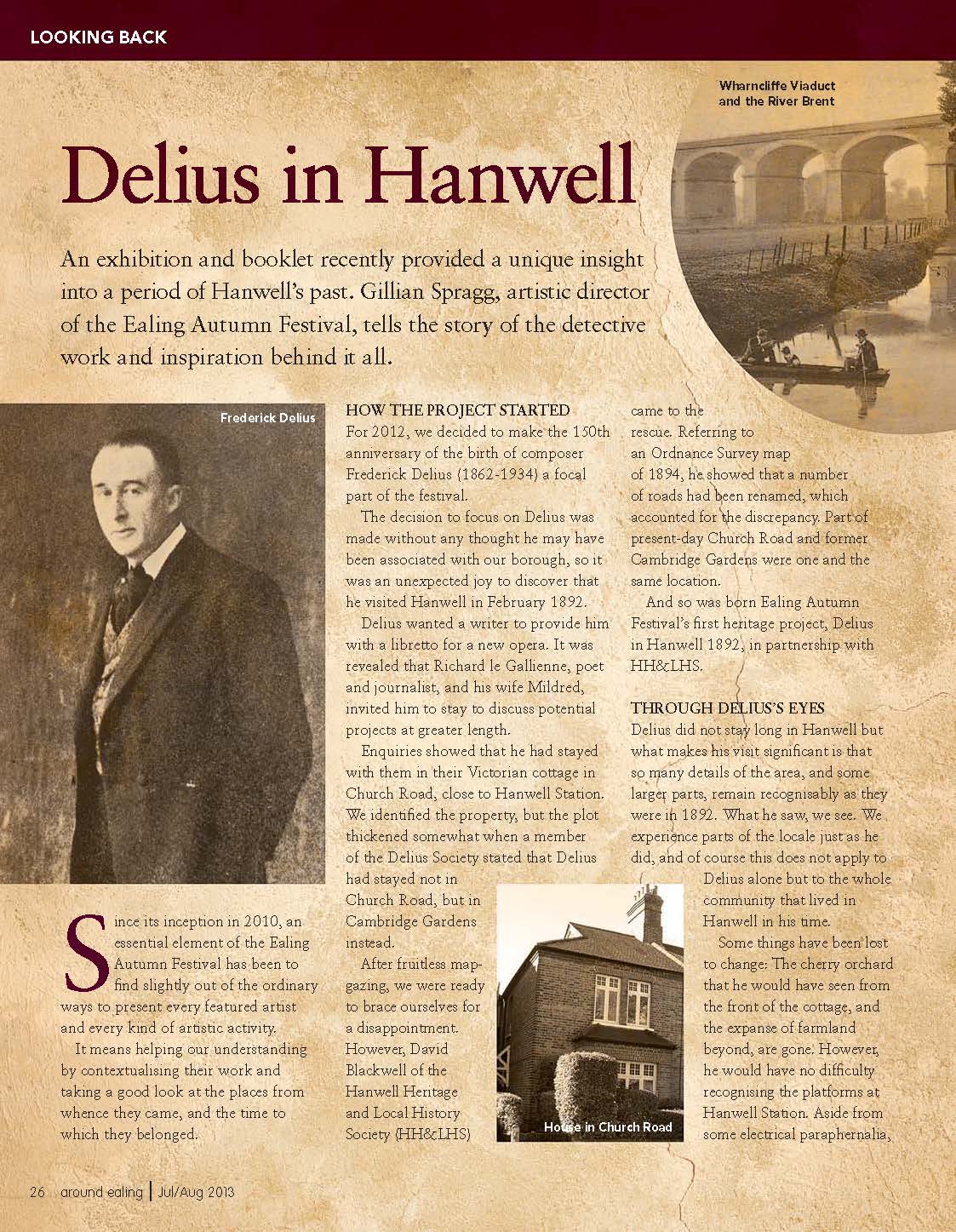 An exhibition and booklet recently provided a unique insight into a period of Hanwell’s past. Gillian Spragg, artistic director of the Ealing Autumn Festival, tells the story of the detective work and inspiration behind it all.

Since its inception in 2010, an essential element of the Ealing Autumn Festival has been to find slightly out of the ordinary ways to present every featured artist and every kind of artistic activity.
It means helping our understanding by contextualising their work and taking a good look at the places from whence they came, and the time to which they belonged.

HOW THE PROJECT STARTED

The decision to focus on Delius was made without any thought he may have been associated with our borough, so it was an unexpected joy to discover that he visited Hanwell in February 1892.

Delius wanted a writer to provide him with a libretto for a new opera. It was revealed that Richard le Gallienne, poet and journalist, and his wife Mildred, invited him to stay to discuss potential projects at greater length.

Enquiries showed that he had stayed with them in their Victorian cottage in Church Road, close to Hanwell Station.

We identified the property, but the plot thickened somewhat when a member of the Delius Society stated that Delius had stayed not in Church Road, but in Cambridge Gardens instead.

After fruitless mapgazing, we were ready to brace ourselves for a disappointment.

However, David Blackwell of the Hanwell Heritage and Local History Society (HH&LHS) came to the rescue. Referring to an Ordnance Survey map of 1894, he showed that a number of roads had been renamed, which accounted for the discrepancy. Part of present-day Church Road and former
Cambridge Gardens were one and the same location.

And so was born Ealing Autumn Festival’s f rst heritage project, Delius in Hanwell 1892, in partnership with HH&LHS.

Delius did not stay long in Hanwell but what makes his visit significant is that so many details of the area, and some larger parts, remain recognisably as they were in 1892. What he saw, we see. We experience parts of the locale just as he did, and of course this does not apply to

Delius alone but to the whole community that lived in Hanwell in his time.

Some things have been lost to change: The cherry orchard that he would have seen from the front of the cottage, and the expanse of farmland beyond, are gone. However, he would have no difficulty recognising the platforms at Hanwell Station. Aside from some electrical paraphernalia, they are unchanged, though the splendid main entrance on the south side of the station was demolished.

Brent Lodge Park and the River Brent retain the tranquility of Delius’s time.

St Mary’s Church, still isolated like a genuine country church from any adjacent buildings, and the exquisite Hermitage, with its thatched roof, are further reminders that Hanwell in 1892 was a rural area.

By contrast, Brunel’s Wharncliffe Viaduct for the Great Western Railway, which had already been built more than 50 years before Delius’s visit, remains an enduring symbol of the power of engineering and technology.

The Delius in Hanwell 1892 project resulted in an exhibition researched by HH&LHS and curated by the Ealing Autumn Festival. And, of course, the booklet. This was researched by David Blackwell, edited by Gillian Spragg, and contributed to by Terry Sanderson, member of the Delius Society and director of the festival.

The booklet is still available, at £4.95. Enquiries can be made by calling 020 8567 7623, or emailing info@ealingautumnfestival.co.uk Thanks are due to Ealing Council; and to Mr and Mrs Eva, the current residents of the home where Delius stayed; for their support of the project.

If you are interested in finding out more about HH&LHS, call 020 8579 0178 or email davidblackwell99@gmail.com

Originally appeared in Around Ealing July/August 2013