Home > Death of an alchemist 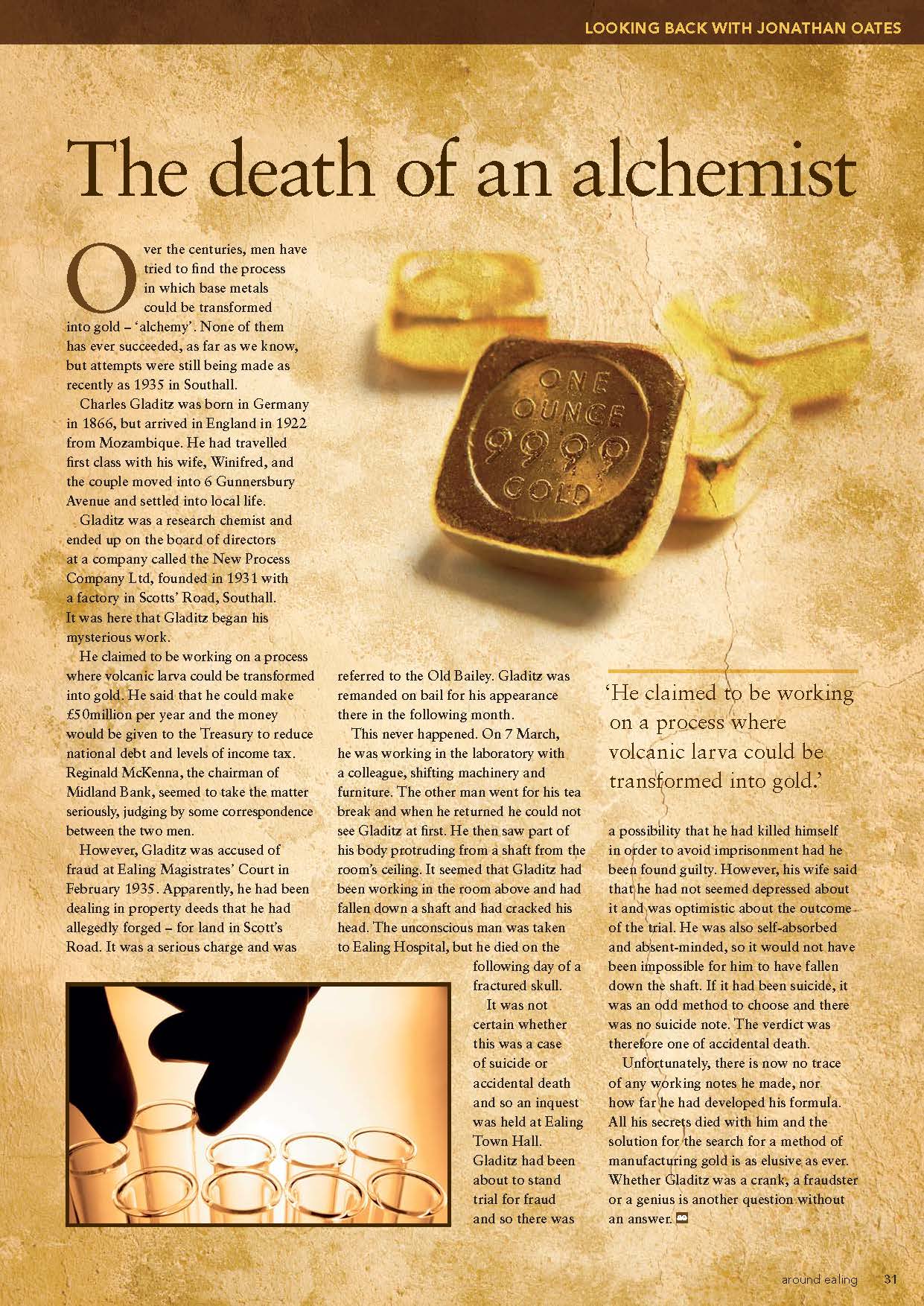 Death of an alchemist

Over the centuries, men have tried to find the process in which base metals could be transformed into gold – alchemy. None of them has ever succeeded, as far as we know, but attempts were still being made as recently as 1935 in Southall.

Charles Gladitz was born in Germany in 1866, but arrived in England in 1922 from Mozambique. He had travelled first class with his wife, Winifred, and the couple moved into 6 Gunnersbury Avenue and settled into local life.

Gladitz was a research chemist and ended up on the board of directors at a company called the New Process Company Ltd, founded in 1931 with a factory in Scotts’ Road, Southall. It was here that Gladitz began his mysterious work.

He claimed to be working on a process where volcanic larva could be transformed into gold. He said that he could make £50million per year from this modern alchemy and the money would be given to the Treasury to reduce national debt and levels of income tax.

Reginald McKenna, the chairman of Midland Bank, seemed to take the matter seriously, judging by some correspondence between the two men.

However, Gladitz was accused of fraud at Ealing Magistrates’ Court in February 1935. Apparently, he had been dealing in property deeds that he had allegedly forged – for land in Scott’s Road. It was a serious charge and was referred to the Old Bailey. Gladitz was remanded on bail for his appearance there in the following month.

This never happened. On 7 March, he was working in the laboratory with a colleague, shifting machinery and furniture. The other man went for his tea break and when he returned he could not see Gladitz at first. He then saw part of his body protruding from a shaft from the room’s ceiling. It seemed that Gladitz had been working in the room above and had fallen down a shaft and had cracked his head. The unconscious man was taken to Ealing Hospital, but he died on the following day of a fractured skull.

It was not certain whether this was a case of suicide or accidental death and so an inquest was held at Ealing Town Hall.

Gladitz had been about to stand trial for fraud and so there was a possibility that he had killed himself in order to avoid imprisonment had he been found guilty. However, his wife said that he had not seemed depressed about it and was optimistic about the outcome of the trial. He was also self-absorbed and absent-minded, so it would not have been impossible for him to have fallen down the shaft. If it had been suicide, it was an odd method to choose and there was no suicide note. The verdict was therefore one of accidental death.

Unfortunately, there is now no trace of any working notes he made, nor how far he had developed his alchemy formula. All his secrets died with him and the solution for the search for a method of manufacturing gold is as elusive as ever.

Whether Gladitz was a crank, a fraudster or a genius is another question without an answer.

This originally appeared in Around Ealing 2009