Home > D-Day: ‘The hour so long awaited has come’ 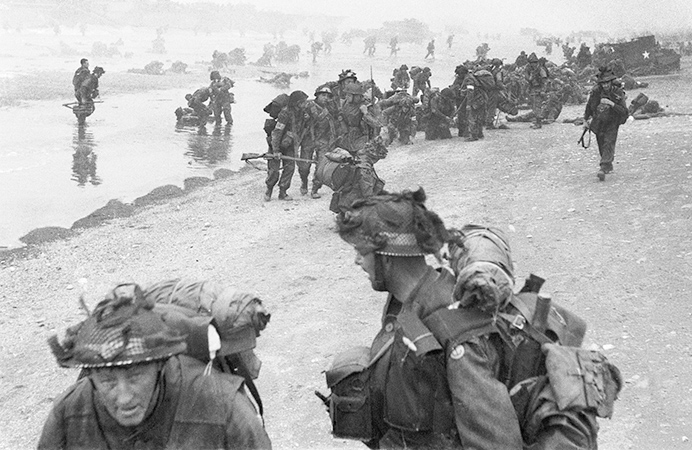 D-Day: ‘The hour so long awaited has come’

With the 75th anniversary of the D-Day landings in Normandy that ushered in a long and hard-fought, but ultimately successful, ending to the Second World War, we look at how the news was received locally. Dr Jonathan Oates found a mixture of relief and calm resolution.

Newspaper editorials and MPs stressed the importance of the D-Day landings on 6 June 1944, but to the mass of the local population, reactions were muted. The local newspaper had the headline, ‘LACK OF EXCITEMENT: MANY WENT TO CHURCH’. It added, ‘There was no jubilation, no demonstrations in the streets or excited gatherings of crowds – in fact the town seemed unusually quiet and empty – when the invasion news broke on Tuesday morning’. This was the case in Acton, Ealing and Southall. People seemed relieved now the news had arrived, as if they had been long expecting it after years of war.

Factory workers went to work as usual, and many work places had the radio news relayed for workers. An Acton worker said ‘They’ve landed’. Shops were quiet in the morning with shoppers staying at home to listen to the radio news. Churches were open all day for prayer and special services were held in the evenings. These were well attended; with 200-250 at Southall Baptist church, 200 at St. Matthew’s in Ealing and 250 at Holy Cross in Greenford. There were prayers after Southall Bowling Club’s Tuesday meeting. At cinemas, films were interrupted so the King’s live speech could be heard at nine o’clock.

Southall’s mayor, John Sturgeon, made the following announcement, ‘We feel that we are all one big family, united for the one purpose of wishing God speed and good luck to all’. Likewise, Sir Frank Sanderson, Ealing’s MP, wrote, after hearing Churchill’s speech in the Commons on 6 June, that despite the different political persuasion of MPs, all were united on this occasion. A newspaper editorial noted, ‘The hour so long awaited has come – the hour attended by all the hopes for the future of mankind – God grant the venture to which we have put our hands may be crowned with triumph at an early date and with as low a cost in death and suffering as may be possible’.

Loss there certainly was, on D-Day. Gerald Pike, a 19-year-old Royal Marine who was employed as a stoker-driver on a landing craft, was killed when the boat he was on received a direct hit, as it approached the Normandy beaches. He had lived at The Lodge, Noel Road in Acton. Private Herbert Reginald Taylor of the Parachute Regiment, a married man and from 111 Clarence Street, Southall, was also killed in Normandy at this time. Over 1,000 employees of the Hoover Factory in Perivale volunteered to give blood for men serving in the Second Front, as the Normandy landings were termed.

It seems many people at home were fairly calm and trying to carry on as normal.

Ealing diarist Erica Ford wrote on 6 June 1944: ‘D Day has arrived. During the night thousands of planes and ships battered France and carried troops to land between Cherbourg and Le Havre, in Normandy. Airborne troops landed behind German lines. Everything so far is going according to plan’.

She also writes about sewing, washing and ironing and then going to the cinema in the evening.

On the next day, she wrote: ‘Things going alright for us in France. We have cleared the beaches and advanced some miles inland. Terrific air support’.

British Forces during the Invasion of Normandy 6 June 1944. Troops of 3rd Infantry Division on Queen Red beach, Sword area, circa 8.45am. In the foreground are sappers of 84 Field Company Royal Engineers, part of No.5 Beach Group, identified by the white bands around their helmets. Behind them, medical orderlies of 8 Field Ambulance, RAMC, can be seen assisting wounded men. In the background commandos of 1st Special Service Brigade can be seen disembarking from their LCI(S) landing craft.

This is photograph B 5114 from the collections of the Imperial War Museums.