Home > Ealing’s link to the first flight across the Atlantic 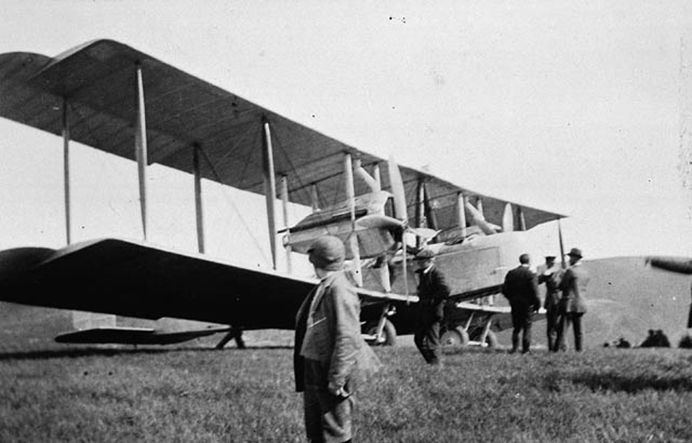 Ealing’s link to the first flight across the Atlantic

Last week (14-15 June) marked a significant date in aviation: The 100-year anniversary of the first ever non-stop flight over the Atlantic. It was achieved against the odds by a pair of Englishmen – one of whom became particularly well known in Ealing.

In April 1913, the Daily Mail newspaper announced a prize of £10,000 (apparently the equivalent of more than £1million today) to achieve the feat of flying across the Atlantic Ocean without stopping.

Back then, the early planes that pioneering pilots flew were fragile, made of fabric and wood. Because of this weakness, along with the limited engines and the lack of knowledge of aerial navigation across the sea, few people thought it possible to fly across the Atlantic.

The challenge was suspended when the First World War broke out in 1914. But it was reissued by the Daily Mail in December 1918 after the Armistice had been signed a month earlier. By this point, plane technology had advanced thanks to the urgency of war.

Two men who had seen action in the war came together in March 1919 to meet the transatlantic challenge: John Alcock and Arthur Brown. At that point, the latter was walking with a cane as a result of a shattered leg he suffered in a plane crash during the war.

Brown had been in a prisoner-of-war camp after the crash, where he read books on aerial navigation, supplied by the Red Cross. During his service he had already learned to navigate in all weathers, using complex calculations.

Like Alcock, the Atlantic challenge was one Brown had long dreamed of taking on – and spoke of it to his fiancée from Ealing, Marguerite Kathleen Kennedy. He had even visited a fortune teller, who he told Marguerite had said to him that he ‘would take a long journey across water soon’.

By May 1919 the men had sailed to the start line of the Atlantic challenge in Newfoundland, USA. And, by 14 June they were ready to fly. You can see their Vickers Vimy ahead of take-off in the picture at the top of this article.

However, things soon started go wrong. And it was quickly an eventful, tricky flight with more than one close shave. However, they eventually reached Ireland. It had taken them 15 hours and 57 minutes to traverse the 1,890 miles.

You can read the full, extraordinary story of the flight on the BBC website.

From transatlantic flight to Ealing

Just a month after this incredible milestone, on 29 July 1919, Brown married Marguerite at the Savoy chapel in London. Brown was very well known now, of course, as being of ‘Alcock and Brown’ fame after the historic first flight across the Atlantic Ocean.

The happy couple were pictured in their wedding attire on the front page of Ealing’s newspaper, The Middlesex County Times.

Brown did not have an Ealing connection but his wife did. She had been born in Gateshead on 6 April 1896, the first daughter of David Henry Kennedy and his wife Marion Archer Kennedy. They went on to have another daughter, Eileen Howard Kennedy, born in Gateshead two years later. The family still lived in the north of England in 1901 but by at least 1905 were living in Ealing, at 8 Lyncroft Gardens from 1905-1911 and then at 26 Oakley Avenue from 1912-1919.

Several Ealing residents attended the wedding and reception at the Savoy. They included the mayor and mayoress, Councillor and Mrs King, Mr and Mrs Dunkerley (he was a well-known author who wrote under the pen name John Oxenham), Dr John Gibson and Mr and Mrs Blackburn. All these people contributed presents; the Kings gave a silver dressing table urn, the Dunkerleys an autographed set of his books, Gibson a silver sugar sifter and the Blackburns a cake basket.

The new couple, and also her family, left Ealing in 1919. David Kennedy eventually moved to Buckinghamshire, where he died in 1940. The Browns, who had moved to Wales by 1939, faced other tragedies with their only son killed in the Second World War and Brown himself died in 1948.

Marguerite died on 1 May 1952. It has been said that Alcock, who sadly died in 1919, lived briefly in a house in Allison Avenue, Acton, but this has not been confirmed.

With thanks to Dr Jonathan Oates, borough archivist. And to the BBC story ‘The Big Stunt‘.