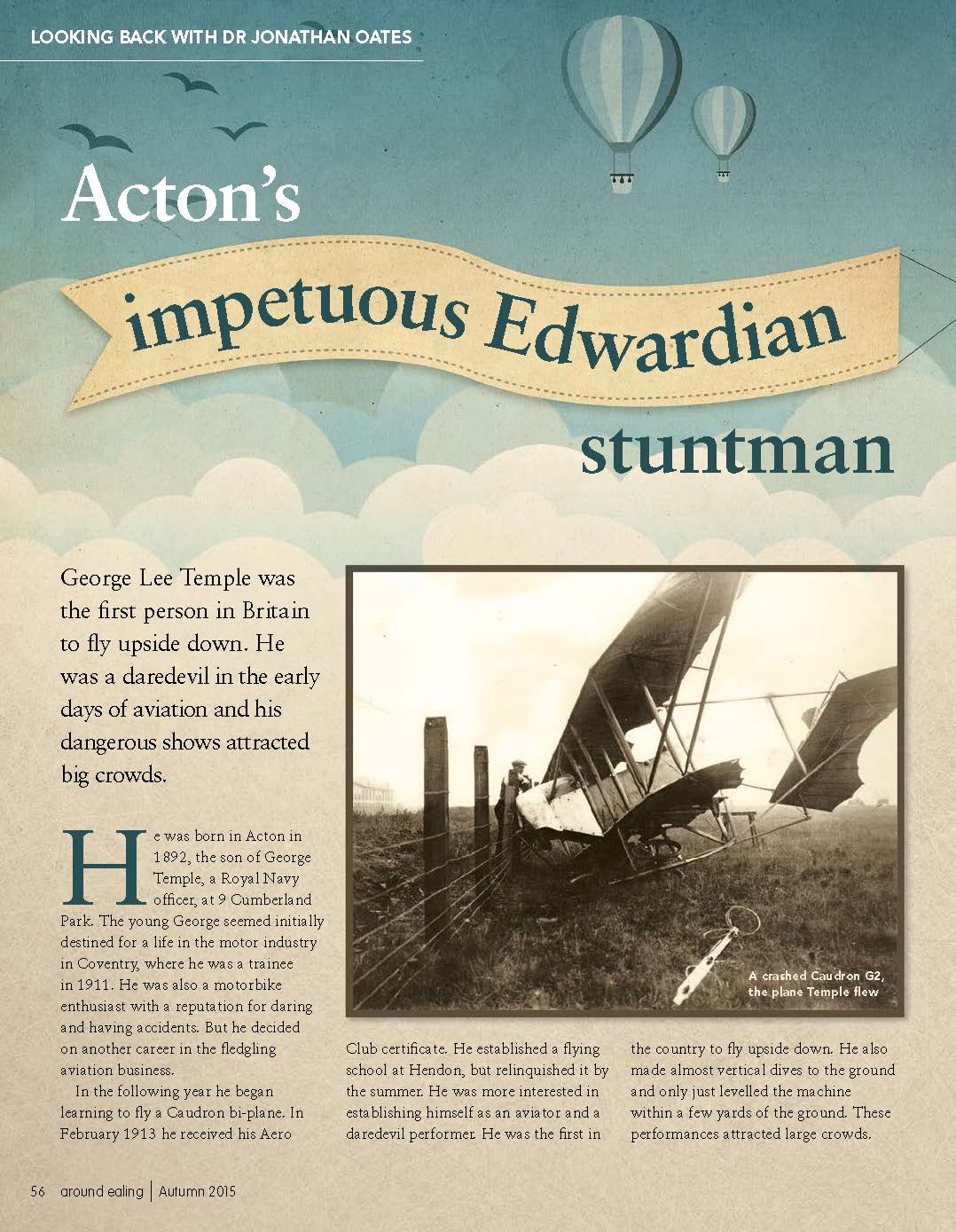 George Lee Temple was the first person in Britain to fly upside down. He was a daredevil in the early days of aviation and his dangerous shows attracted big crowds.

He was born in Acton in 1892, the son of George Temple, a Royal Navy officer, at 9 Cumberland Park. The young George seemed initially destined for a life in the motor industry in Coventry, where he was a trainee in 1911. He was also a motorbike enthusiast with a reputation for daring and having accidents. But he decided on another career in the fledgling aviation business.

In the following year he began learning to fly a Caudron bi-plane. In February 1913 he received his Aero Club certificate. He established a flying school at Hendon, but relinquished it by the summer. He was more interested in establishing himself as an aviator and a daredevil performer. He was the first in the country to fly upside down. He also made almost vertical dives to the ground and only just levelled the machine within a few yards of the ground. These performances attracted large crowds.

It was certainly dangerous. He was involved in two crashes in 1913. In January of that year he had taken a Bleriot pattern monoplane from the aerodrome at Hendon and crashed, falling 40 feet to the ground. Although the plane was damaged he was not and when people rushed to the site, they found him calmly smoking among the wreckage. He was flying again in a few days’ time.

On the other instance, in December, he was flying from Hendon to Uxbridge above the Brent Valley, but was forced to land at Harefield. The plane became wedged between two trees in a farm.
He was unharmed and the machine undamaged, but it took three hours for it to be removed from the trees.

It also seems he had enemies. In late 1913 he received two anonymous letters, one reading, ‘An attempt will be made to prevent you flying on the Thursday’. He ignored it, but when he was in flight he heard a loud bang and later the mechanics found rivets and powder in the cylinders. A similar incident occurred two days later. The mechanic said that these items could not have been put there accidentally.

However, on Sunday 25 January 1914, after having been unwell for the last fortnight, he was determined to fly again. His father advised him against it, but he told him, ‘Father, you can trust me’.

However, when he was performing an exhibition flight at the aerodrome, where he rose 800 feet, ascending and descending at very steep angles, a gust of wind caught the plane’s tail and the machine toppled over. Unable to bring the plane to a horizontal in order to land, he fell to the ground. Temple was found underneath the plane with his neck broken. The inquest suggested that
Temple had still been ill at the time of the crash.

The funeral at Acton Cemetery six days later was very well attended and one of the floral tributes was in the shape of a monoplane. An ornate memorial was erected in December 1914.

This originally appeared in Around Ealing autumn 2015