Home > A Victorian farmer in Northolt 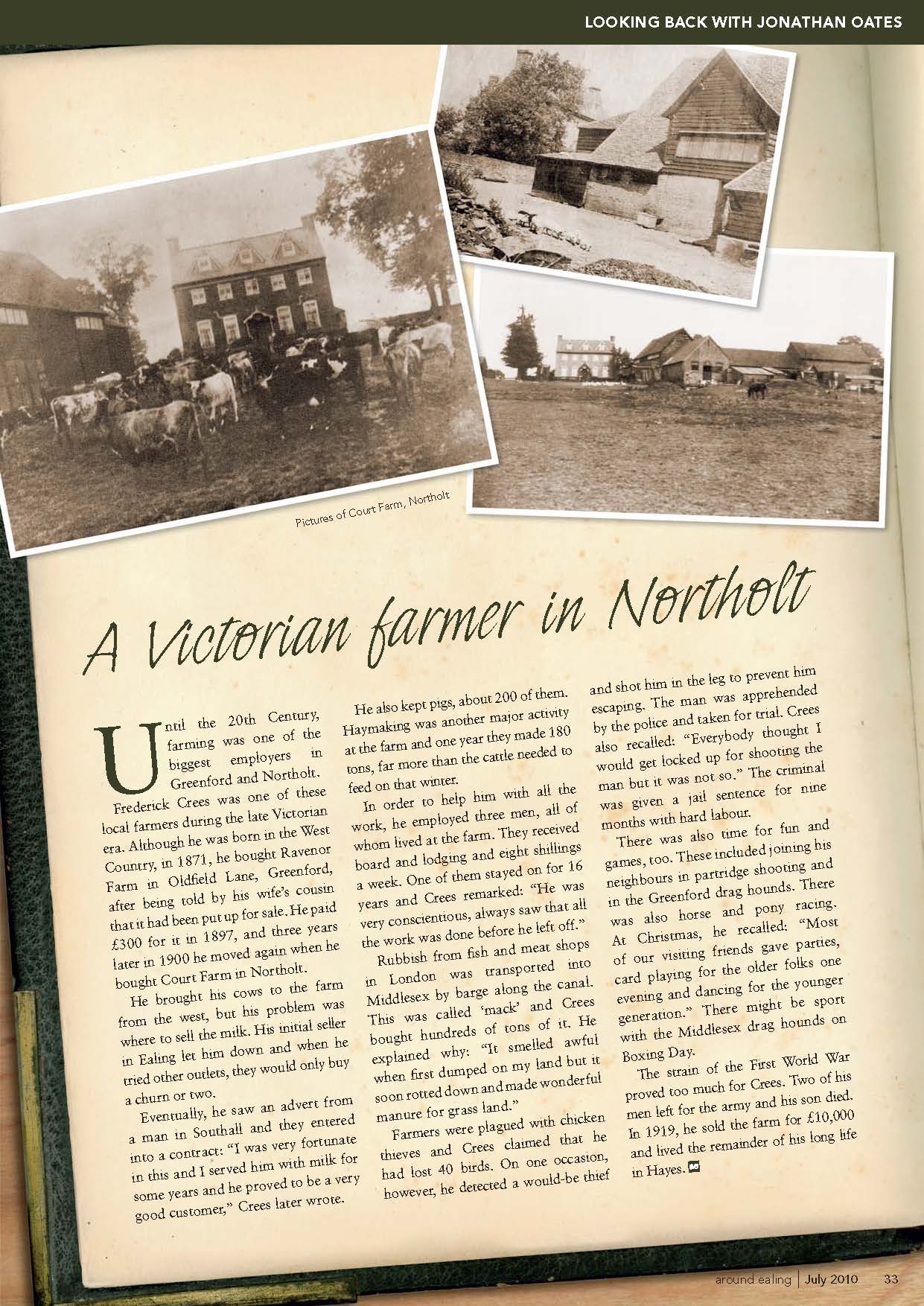 A Victorian farmer in Northolt

Until the 20th Century, farming was one of the biggest employers in Greenford and Northolt.

Frederick Crees was one of these local farmers during the late Victorian era. Although he was born in the West Country, in 1871, he bought Ravenor Farm in Oldfield Lane, Greenford, after being told by his wife’s cousin that it had been put up for sale. He paid £300 for it in 1897, and three years later in 1900 he moved again when he bought Court Farm in Northolt.

He brought his cows to the farm from the west, but his problem was where to sell the milk. His initial seller in Ealing let him down and when he tried other outlets, they would only buy a churn or two.

Eventually, he saw an advert from a man in Southall and they entered into a contract: “I was very fortunate in this and I served him with milk for some years and he proved to be a very good customer,” Crees later wrote.

He also kept pigs, about 200 of them. Haymaking was another major activity at the farm and one year they made 180 tons, far more than the cattle needed to feed on that winter.

In order to help him with all the work, he employed three men, all of whom lived at the farm. They received board and lodging and eight shillings a week. One of them stayed on for 16 years and Crees remarked: “He was very conscientious, always saw that all the work was done before he left off.”

Rubbish from fish and meat shops in London was transported into Middlesex by barge along the canal. This was called ‘mack’ and Crees bought hundreds of tons of it. He explained why: “It smelled awful when first dumped on my land but it soon rotted down and made wonderful manure for grass land.”

Farmers were plagued with chicken thieves and Crees claimed that he had lost 40 birds. On one occasion, however, he detected a would-be thief and shot him in the leg to prevent him escaping. The man was apprehended by the police and taken for trial. Crees also recalled: “Everybody thought I would get locked up for shooting the man but it was not so.” The criminal was given a jail sentence for nine months with hard labour.

There was also time for fun and games, too. These included joining his neighbours in partridge shooting and in the Greenford drag hounds. There was also horse and pony racing.

At Christmas, he recalled: “Most of our visiting friends gave parties, card playing for the older folks one evening and dancing for the younger generation.” There might be sport with the Middlesex drag hounds on Boxing Day.

The strain of the First World War proved too much for Crees. Two of his men left for the army and his son died.

This originally appeared in Around Ealing July 2010