Home > A stack of plaques 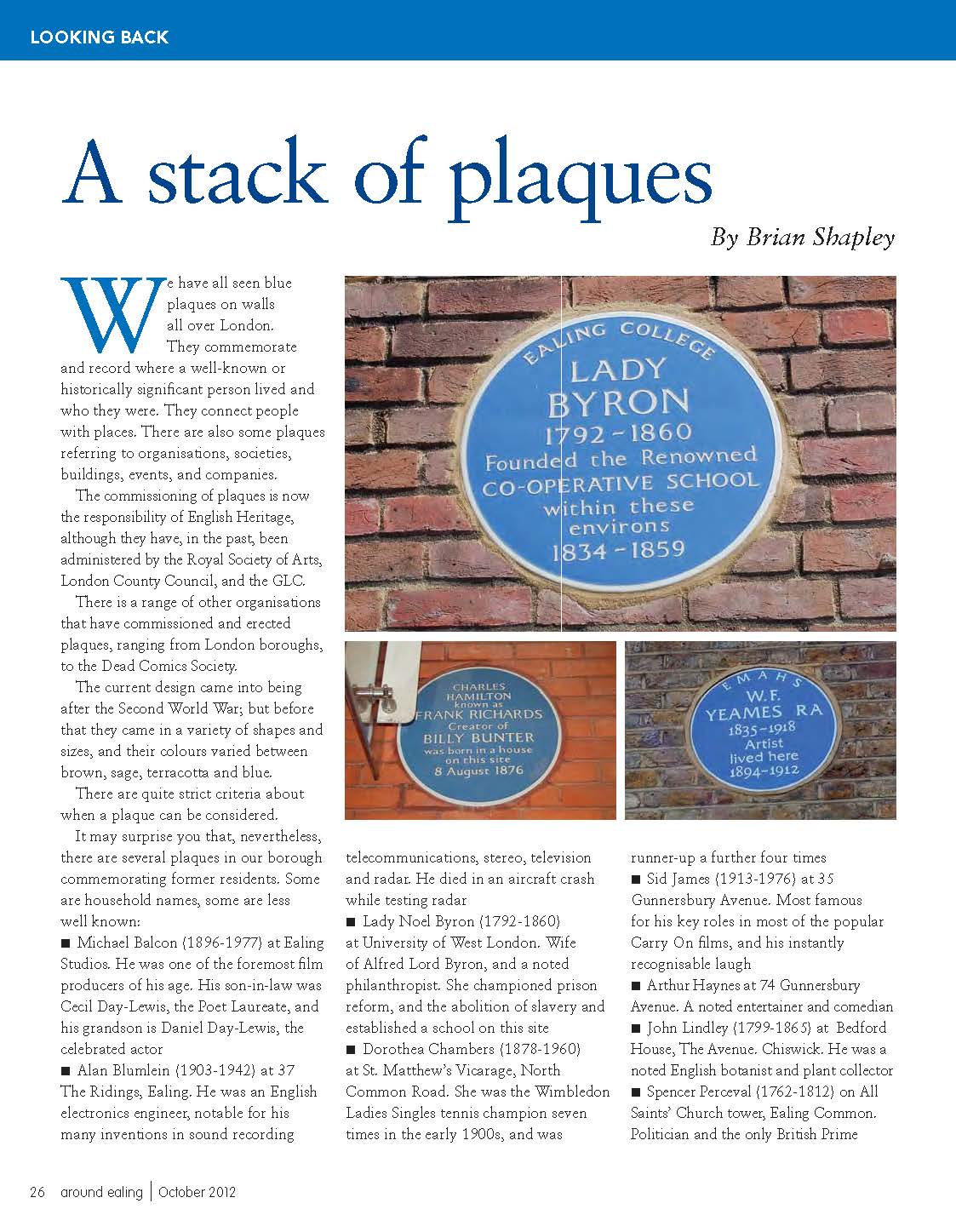 A stack of plaques

We have all seen blue plaques on walls all over London. They commemorate and record where a well-known or historically significant person lived and who they were. They connect people with places. There are also some plaques referring to organisations, societies, buildings, events, and companies, writes Brian Shapley.

The commissioning of plaques is now the responsibility of English Heritage, although they have, in the past, been administered by the Royal Society of Arts, London County Council, and the GLC.

There is a range of other organisations that have commissioned and erected plaques, ranging from London boroughs, to the Dead Comics Society.

The current design came into being after the Second World War; but before that they came in a variety of shapes and sizes, and their colours varied between brown, sage, terracotta and blue.

There are quite strict criteria about when a plaque can be considered. It may surprise you that, nevertheless, there are several plaques in our borough commemorating former residents. Some are household names, some are less well known:
■ Michael Balcon (1896-1977) at Ealing Studios. He was one of the foremost film producers of his age. His son-in-law was Cecil Day-Lewis, the Poet Laureate, and his grandson is Daniel Day-Lewis, the celebrated actor
■ Alan Blumlein (1903-1942) at 37 The Ridings, Ealing. He was an English electronics engineer, notable for his many inventions in sound recording telecommunications, stereo, television
and radar. He died in an aircraft crash while testing radar
■ Lady Noel Byron (1792-1860) at University of West London. Wife of Alfred Lord Byron, and a noted philanthropist. She championed prison reform, and the abolition of slavery and established a school on this site
■ Dorothea Chambers (1878-1960) at St Matthew’s Vicarage, North Common Road. She was the Wimbledon Ladies Singles tennis champion seven times in the early 1900s, and was runner-up a further four times
■ Sid James (1913-1976) at 35 Gunnersbury Avenue. Most famous for his key roles in most of the popular Carry On films, and his instantly recognisable laugh
■ Arthur Haynes at 74 Gunnersbury Avenue. A noted entertainer and comedian
■ John Lindley (1799-1865) at Bedford House, The Avenue. Chiswick. He was a noted English botanist and plant collector
■ Spencer Perceval (1762-1812) on All Saints’ Church tower, Ealing Common. Politician and the only British Prime Minister to be assassinated
■ Frank Richards, whose real name was Charles Hamilton (1876-1961). His plaque is at Ealing Broadway Shopping Centre. The creator of Billy Bunter
■ William Willett (1856-1915) at 16 Avenue Crescent, Acton. An ardent promoterbof British Summer Time, which was adopted in 1916. However, he did not live to see it be introduced
■ William F Yeames (1835-1918) at 8 Campbell Road, Hanwell. The artist whose most famous work is ‘When Did you last See Your Father’ is now on display in the Walker Art Gallery, Liverpool
■ There is a plaque on the pavement near 263 Acton Hill, where Wallace Waite, Arthur Rose and David Taylor opened a shop in 1904. This was the beginning of what later became Waitrose.

Possible names who meet the criteria for future consideration include Lillian Board (1948-1970). She ran 400metres and 800metres for England and Great Britain – including at the 1968 Olympics in Mexico, where she won silver in the 400metres. She set an incredible 11 UK records in the events, and won two golds at the European Championships in 1969, at 800metres and the 4x400metre relay. Tragically, she died of cancer aged only 22 years old.

Fred Perry is the most successful male tennis player that Britain has ever produced.

This summer, Perry (1909-1995) was commemorated by English Heritage with a blue plaque at 223 Pitshanger Lane, Ealing – his home during his Wimbledon triumphs.

Although a northerner by birth, Perry’s formative years were spent in Ealing. Perry remembered “practising my tennis strokes with the aid of my umbrella on the 20 minutes’ walk to Ealing Broadway Station, clipping the tops of hedges and flowers when nobody was looking”. Perry played the game for real at the Brentham Institute (now the Brentham Club) in Meadvale Road, just a few streets away.

John Barrett, tennis commentator and close friend of Fred Perry, spoke at the ceremony and the plaque was unveiled by Perry’s grandson, John Perry.

Perry was also the key player in the Great Britain team that won the Davis Cup for four years running (1933-6).

In 1950, with the businessman Theodore Wegner, Perry founded Fred Perry Sportswear, which became a global success. He sold his interest in the company in 1961, but continued to be involved in promotion.

This originally appeared in Around Ealing October 2012