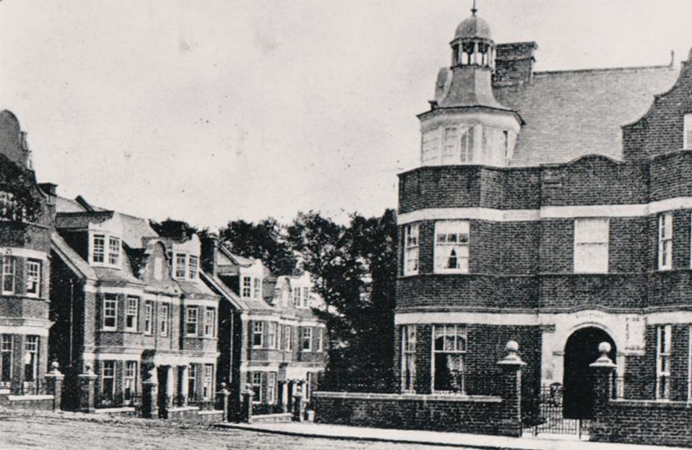 This is the 13th week of our serialisation of Ealing resident Alexander Goodlet’s diary from 80 years ago. This week, a Ronald Macdonald turns up (not that one), he popped down to Southampton docks – and he keeps his watchful gaze on unfolding events on the continent and in Parliament. To see the background to the serialisation, and the cast of characters, read our introduction.

A day of much busyness. The Mater left home about 9.45 to meet Joan at the hospital and take her and Anabelle home; while an hour later Thomasina and I set out to walk over there also.

Thomasina was quite amazed to see her mother again and very surprised to see the baby. She routed out her doll’s pram and loudly demanded that the baby should be put in it for her to rush about. Anabelle herself is a fair, bonny wee soul and seems very good. Her head reminds me much of Kidd’s.

The Mater and I had lunch there and returned here at 3.30 for tea with Buzz, who is at home today with a sore throat. Next, I returned to Joan’s with the fire guard and found her and Thomasina completely into the old run of things once more. Had another cup of tea with them and paid a visit to the Aunts, whom I don’t seem to have seen for quite a while.

After dinner I went yet again to Ealing, my 4th visit today, to air mail a letter and also call on Kidd and return his toothbrush and just see how they all are. Found them all very happily settled in to their house once more. During one of my visits to Ealing I had a glance at the GWR and was the 11.55 .m. S. Wales express train drawn by the new 4-6-0 Lloyds; also the Torbay hauled by King George V.

Next, who should I meet but old Mr MacDonald, who looks fitter and younger now than he did 15 years ago. He told me that Ronald is now managing director of his firm and that Norman is a director of his, the one in coal and the other in wheat. Ye gods, and when I first met them in 1920 Ronald had just left Watsons and Norman was in the infants form at Hillsborough. Well, I don’t envy them their well earned success, but it does rub in one’s own futility.

The Pater was lunching with Lord Garrick today and he was telling the Pater that there is going to be a huge political dust up here as a result of all the various sectional opinion in the country ion the varying international goings on and our handling of them.

Have written Jeanette and J.M.

Rose fairly early to hear the various broadcasts of the Queen Mary, which this day left her fitting out basin and made the perilous and precarious passage down the winding Clyde to the sea. It must have been a grand sight, and what would I not have given to see it. The whole business went off splendidly and is a great credit to all concerned.

After tea went to Ealing to air mail Jeanette’s and J.M.s’ letters. After dinner was just preparing to resume work on the map at long last when in came Stanley, so had a social evening instead.

Listened to Air Commodore Chamier talking about the air menace. I fear the good gentleman had dined over wisely. It was very funny.
To Horn Lane as usual. Have put in a couple of hours on the rebuilding of the Boys’ tank engine.

Tonight the Pater very sportingly suggested I should go down to Southampton to see the Queen Mary arrive.

Up at lunch time and then down to the bank. Home for a tea besides the drawing room fire with the Mater and Pater, the Boys being out at the Aunts’. They also called at the Common and found them all well there.

Before dinner strolled to the Post office in Ealing and found the High Street flooded, a gang of gas fitters having drilled a water main in mistake for a gas one.

After dinner went down to Victoria to book a trip to Southampton to see the Queen Mary, but they had sold out there and I was very lucky to get one at Waterloo. Saw a Drummond 0-4-4 tank there, No. 251. Home at 11.30.

The Pater has serious news from Burgos tonight, confound it. I hope it may not prove so bad as it seems.

Today’s special news is of the blackguardly murder of a retire N.O., Vice Adm, H.B. Somerville in his home near Cork by a mob of Irish gunmen. Swine.

The international situation seems to me more dangerous than ever. Germany is just mulish and France liable to do something damned silly at any moment.

Got to bed at six and, I fear, did not rise until 2.30, in spite of having breakfast in bed. The Mater and the Aunts, it seems, went off to Joan’s but I slumbered happily on.

Very quiet day. Mr Stanley came at 6.30 and after dinner I had to make a hurried visit to Ealing to air mail a letter for the Pater.

Ernest came in and, after waiting for the others until 10 and listening to that damned thing The Ringer on the wireless until that time, we sailed two friendly matches, one of which Ernest won; and the other went to Mr Stanley. Walked with him to Horn Lane. Have just put in a busy morning getting things ready for my early start in the morning.

Anthony Eden has made a great speech in the House tonight on the international situation.

This really should be written in red ink, as it has certainly been a red letter day for me. Spent a lot of time last night fitting improvements to my camera and, incidentally, the first thing I did on leaving the house this morning was to drop the damned thing and break it, so I expect that such photos as I took will be useless.

Did not sleep until after 5.40 at least and as the Mater wakened me at 6.15 I was pretty tired. She had a jolly fine breakfast ready for me and I got away most successfully, reaching Waterloo at 7.40. The train was a fine one, all 1st class saloons, and we made a good run down, although it was rather spoiled for me by a talkative old gentleman who attached himself to me for hours. I like the LSWR section of the SR and enjoy a good run on it. I had not been on that run since 1933, when I went down with Jeanette to see her off on the AA Bullaren and before that since 1913.

Arrived at the Docks and embarked on the SS St. Briac, one of those very neat SR Channel islands ships; really, they are miniature liners and very nice ships indeed; and joined by two others, the Isle of Guernsey and the Lorina we went down the water to Cowes Road, where we could already see the outline of the Queen Mary towering over that of the Island. Unfortunately it was hazy, with some rain and a very cold wind.

We joined the circus of ships that was circling round and round the QM, seven or eight paddle steamers (and I never before imagined that ships could be safely listed to the degree that every one of those ships was with sightseers; each had her port paddles clean out of the water).

The QM is a marvellous sight and her hull has the loveliest lines imaginable; but to my mind she is spoilt by her horrible funnels, their unequal size and horrible rake aft giving her when viewed ¾ fore or aft a monstrous appearance. But her hull is a dream.

We then had a piece of luck, for what should be spied coming down Southampton Water but the SS Bremen and then coming up the Solent but the SS Hamburg. Curiously, the Bremen impressed one as being a bigger ship than the QM, except when they are actually alongside each other. As for the Hamburg, her hull sheer line is the most beautiful I have ever seen and her neat appearance on deck has a great charm in these days of ugly layouts, such as the Warwick Castle, which we also saw today, displays. Another really good looking ship we saw today was the Johan de Witt, a Dutch liner and an example to all.

Slept until lunchtime and in the afternoon went along to tea at the School. Told them that I should probably not be able to go to the dance this evening as I had to be busy on the map. Was not very popular in consequence. Was amused by Stanley’s walking home with me and cheerfully accepting an invitation to a snack supper. Apparently he is not too keen on the dances. We had a pleasant evening and I accompanied him to Horn Lane. Have just put in three hours’ work on the map.

…Kidd, Joan and their youngsters were along to tea today and all look very fit.

In spite of breakfast in bed I rose at lunch time feeling like nothing in earth. Dog tired.

Helped the Mater on routine work and then set on the map once more. Kidd and Howard called with Thomasina, but did not stay to tea.

The Aunts came for tea and dinner, and Mr Stanley also came to dinner, so we were quite a party. Listened to the German election results from Berlin.

Stanley also played some of his music for us. Walked to Horn Lane with him and came back via Creffield Road [pictured]. Am terribly tired again.

I see from the papers that it is now admitted that it was touch and go getting the Queen Mary down the Clyde and that at one moment she stuck on the Dalmuir Bend. A great tragedy, not only for the ship but for the Clyde and the Port of Glasgow was within an acme of taking place. What a disaster it would have been.