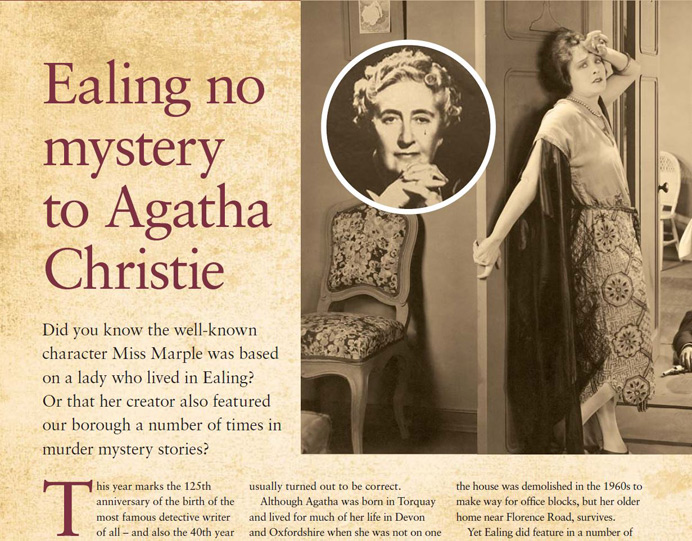 Ealing no mystery to Agatha Christie

Did you know the well-known character Miss Marple was based on a lady who lived in Ealing? Or that her creator also featured our borough a number of times in murder mystery stories?

This year marks the 125th anniversary of the birth of the most famous detective writer of all – and also the 40th year since her death: A double milestone being marked around the country.

The 1911 census lists, in the household at 99 Uxbridge Road, Ealing, a 20-yearold named Agatha Miller. Later, she was
known as Agatha Christie.

She was visiting her great aunt Margaret Miller, who had lived in Ealing for more than three decades. Mrs Miller had an important role to play in her great niece’s future because she was the inspiration for her favourite fictional character, Jane Marple. Although there were differences between the two elderly ladies, they shared a great scepticism
about human nature and their fears usually turned out to be correct.

Although Agatha was born in Torquay and lived for much of her life in Devon and Oxfordshire when she was not on one of her numerous trips abroad, she often visited her great aunt in Ealing in its late Victorian and Edwardian years, when the term ‘Queen of Suburbs’ was first coined.

Agatha clearly had plenty of affection for Mrs Miller, for she spends pages describing her aunt and her social circle and the Ealing of the times in her autobiography. She remembered walking around the fields near St Stephen’s Church and also the alarm felt by some at the arrival of the trams in 1901. However, once Mrs Miller left Ealing in 1914 Agatha knew it no more, having no reason to visit it again. As with many other detached houses on the Uxbridge Road, the house was demolished in the 1960s to make way for office blocks, but her older home near Florence Road, survives.

Yet Ealing did feature in a number of Agatha’s later stories, more so than any other identifiable suburb of London.

An alleged murder weapon is found on Haven Green in a short story in the 1920s. Reference is also made to the District Line station nearby. In Poirot novel the detective visits a house in the fictionalised Castlebar Road to talk to a retired civil servant about a current investigation. Miss Marple once takes a train through ‘Haling Broadway’ and ‘Harwell’ (Ealing Broadway and Hanwell).

There is even a place for what was once known as the County Asylum, referred to by the characters in The Big Four as the Hanwell Asylum. A member of staff arrives at Poirot’s flat, wanting to know about a man who has allegedly escaped from there. It is not one of Poirot’s more astute moments in one of Agatha’s lesser books.

A real life murder in Ealing in 1936 may have inspired part of Christie’s novel Towards Zero, written a few years later. In 1954 there was a murder in Ealing which might well have been subliminally inspired by an Agatha Christie style whodunit.

A few other coincidences are that David Suchet, well known for playing Agatha Christie’s Belgian detective, Hercule Poirot, lived in Southall and Acton in the 1980s, and Philip Jackson who played Inspector Japp also lives locally. In 1985, when living in Acton, Suchet played Inspector Japp in the TV film Thirteen at Dinner, alongside Peter Ustinov as Poirot and recalled it was not one of his best roles.

Dr Oates gave a talk on this subject at Ealing Central Library. This article originally appeared in the spring 2016 edition of Around Ealing magazine.