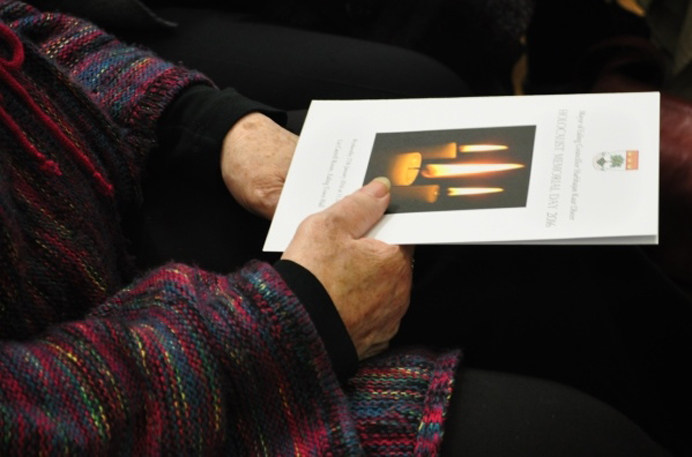 “On 11 January 1939, my parents did an amazingly brave thing. When I was just eight years old, they put me on a train at the Vienna West station bound for England. Not knowing if they would ever see me again.”

So said Ernest Simon, who was forced to flee Austria as a Jewish child refugee, and who gave a talk on Holocaust Memorial Day 2016. The horrors of the Holocaust were brought to life at the special service at Ealing Town Hall, held by Ealing Council to remember the victims and survivors. The council holds an annual event to remember all those around the world who lost their lives as a result of acts of genocide.

“Let me tell you why they did what they did, the background to all this and what happened to me,” said Mr Simon. “In 1933 the persecutions of the Jews had begun in Germany and by 1935 laws had made large numbers of Jews stateless and the 1935 Nuremburg Laws made large numbers of Jews stateless, the concentration camps were already in force and the world was becoming aware of the plight of Jews in Germany.

“Franklin Rosevelt was coming under increasing pressure from various sides to do something about the plight of the Jews. He convened the conference at Evian Les Bains, in Geneva, France.  The remit of the conference was to find a solution to the problems of Jewish refugees in Germany and Austria.

“Delegates of the conference expressed empathy to the plight of Jews under Nazism. The representatives offered only excuses for not letting in any more refugees to their countries. No country was willing to accept substantial numbers of Jewish refugees at that time.

“So, the Evian conference was a disaster. Complete failure.

“There were Nazi observers at the conference and when they returned to Berlin after the conference, they said to Hitler, you can do what you want with the Jews, nobody cares.

“This is really the background to my own story.

“I was born in Eisenstadt, in Eastern Austria. It was a town with a rich Jewish culture and history spanning back a few hundred years.

“When I was about seven suddenly everything changed for the Jews. Jewish children could not go to school and I had no school for several months. My father worked for a Jewish company of shoe makers so that was closed down very quickly. The Nazis’ objective was to rid Austria of Jews and we, along with the entire Jewish community of Eisenstadt, were forced to leave the town, leaving our belongings behind and basically leaving our homes and everything. This was ethnic cleansing as you know it today.

“We moved to Vienna where we settled into a small flat in the Jewish district in Vienna. I stayed there, my parents and I, from September 1938 until the time when I left. During this time while we lived there, my father made desperate efforts to obtain an exit visa.  He was applying to England, to the United States and to Palestine. Whichever came first, he was prepared to take.

“A massive, co-ordinated attack on Jews throughout the German Reich on the night of November 9, 1938, into the next day, has come to be known as Kristallnacht or The Night of Broken Glass.

“Synagogues and other Jewish buildings and shops were attacked, ransacked, pillaged and burnt.

“We lived on this street with a synagogue on it. And from my bedroom window I actually saw the bonfire of the torah scrolls and prayer books burning in the middle of the street which the Nazis had orchestrated.

“The events of Kristallnacht acted as a catalyst in certain quarters in the United Kingdom and the concept of the Kindertransport was born.”

The Kindertransport (German for children’s transport) was an organised rescue effort that took place before the outbreak of the Second World War. The United Kingdom took in nearly 10,000 predominantly Jewish children from Germany, Austria, Czechoslovakia, Poland, and the Free City of Danzig. The children were placed in British foster homes, hostels, schools and farms. Often they were the only members of their families who survived the Holocaust.

Ernest continued: “The Quakers were an important element in this whole story. They helped to make sure that the rescue plan worked. They were at stations getting children on to the trains – stations in Germany and in Austria. They were in the Hook of Holland making sure that the children got on to the ship and they were at Liverpool Street station making sure that no child did not have someone with whom he could go home. At that time the government wanted a £50 guarantee for each child, £50 in today’s money is something like £3,000. The Quakers gave guarantees for about 7,000 children, an incredible thing which one has to admire.

“In the years since the children had left the mainland of Europe, the Nazis and their collaborators had killed nearly 6million European Jews, including nearly 1.5million children.

“Questions have clearly been asked whether more could not have been done by various countries. However the government which was in power in 1938 has the grateful thanks of about 10,000 children, whose lives were saved.

The Holocaust: An overview

When Hitler came to power, one of the first things he did was introduce a full scale programme of persecution. The Nuremberg Laws (1935) deprived Jewish people of many of their civil rights. This was followed on 9 November 1938 by Kristallnacht where Jewish businesses, synagogues and homes were attacked and destroyed.

After 1939, the Nazis persecution of the Jewish people gained momentum. The Nazi’s herded Jewish families into over-crowded ‘ghettos’ where they were not allowed to work or go to school.

After 1941 following the invasion of the Soviet Union, Nazi death-squads, called ‘einsatzgruppen’, murdered more than a million Jewish people in eastern Europe.

In 1942, a Nazi conference at Wannsee decided on the Final Solution – the Jewish people were to be taken to camps such as Auschwitz and gassed. Nobody knows how many Jewish people died during the Holocaust, but an estimate of 6million is regularly quoted.