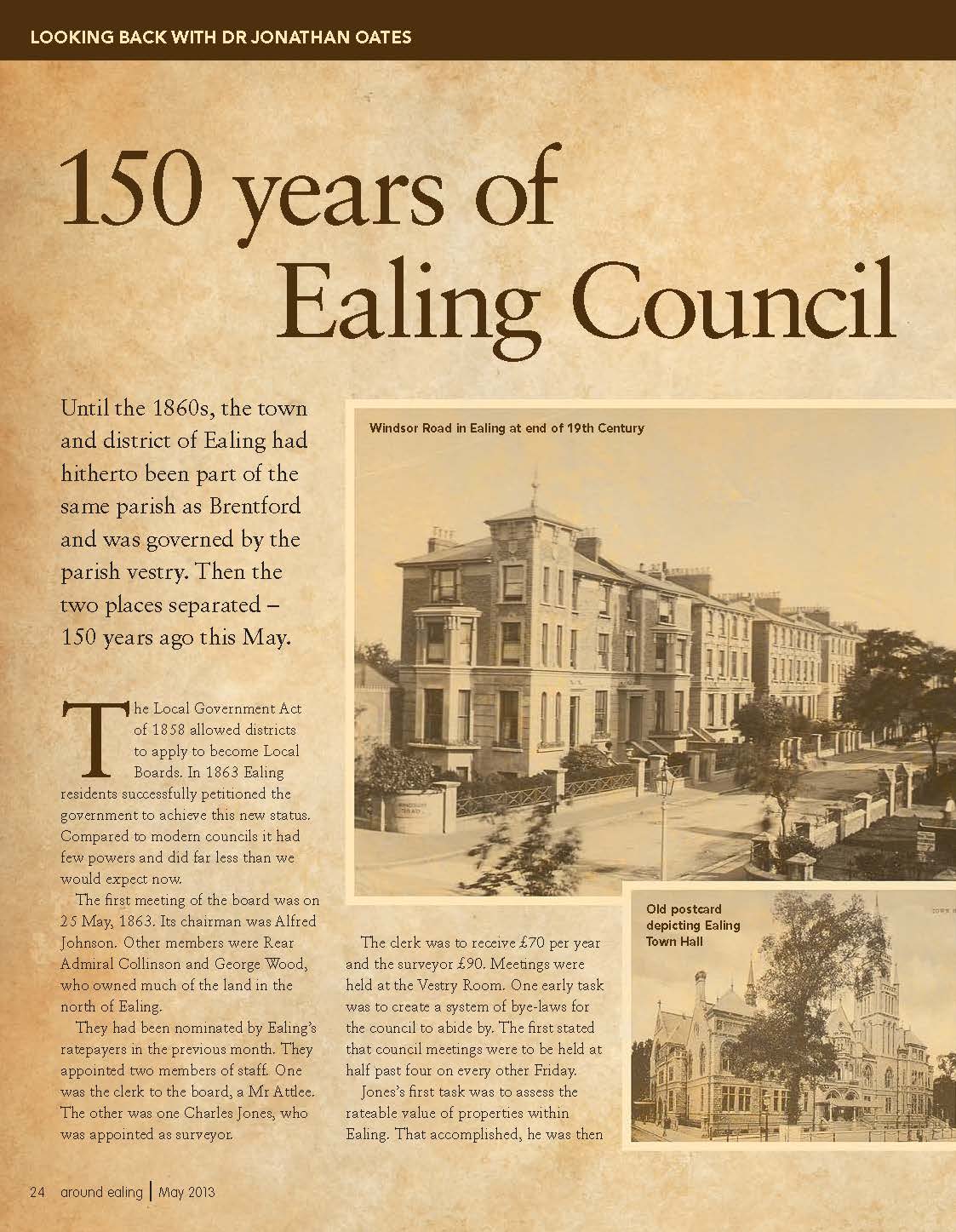 Until the 1860s, the town and district of Ealing had hitherto been part of the same parish as Brentford and was governed by the parish vestry. Then the two places separated – 150 years ago this May (2013).

The Local Government Act of 1858 allowed districts to apply to become Local Boards. In 1863 Ealing residents successfully petitioned the government to achieve this new status.

Compared to modern councils it had few powers and did far less than we would expect now.

The first meeting of the board was on 25 May, 1863. Its chairman was Alfred Johnson. Other members were Rear Admiral Collinson and George Wood, who owned much of the land in the north of Ealing.

They had been nominated by Ealing’s ratepayers in the previous month. They appointed two members of staff. One was the clerk to the board, a Mr Attlee. The other was one Charles Jones, who was appointed as surveyor.

The clerk was to receive £70 per year and the surveyor £90. Meetings were held at the Vestry Room. One early task was to create a system of bye-laws for the council to abide by. The first stated that council meetings were to be held at half past four on every other Friday. Jones’s first task was to assess the rateable value of properties within Ealing. That accomplished, he was then tasked with inspecting all the ponds in Ealing and reporting on the state of local sewerage.

He also went to other districts which had adopted the Act to see how they had dealt with the question of drainage. It should be remembered that in the 19th Century that waterborne diseases such as typhus and cholera were deadly, so the question of maintaining a clean water supply was vital to a growing town.

Indeed, a drainage sub-committee was formed. They reported that they had visited four towns and inspected the sewerage system there. Jones drew up a plan to deal with the sewerage. He would also superintend the work itself. By September 1863 adverts were placed for tenders. Jones was also appointed ‘inspector of nuisances’ at £10 per year. He would also be paid 3% commission on any public works undertaken.

Likewise, Mr Attlee was appointed rate collector, not at a salary but on a commission of 2% of money collected. Rates were decided at about 1% on property and 2% of the value of land. This would bring in £690 per year. Money was also borrowed, though permission had to be sought from the Home Secretary.

Lighting was another need and it was decided to install street lamps in Ealing. There were to be six more in Uxbridge Road, four in Little Ealing, three on Castlebar Hill and eight others in five other roads. The inhabitants of Drayton Green refused to have lights there, however. They would be lit on the evenings of every month from September to April.

In the first few months of its existence, the new council had devised by-laws and appointed two members of staff. It had also taken the first steps to have a proper drainage system in place and to increase the number of street lights – except in Drayton Green. From such tiny acorns…

In 1965, the old boroughs of Ealing, Acton and Southall were abolished. They were merged into one new local authority, Ealing Council. This new council was to administer the new London Borough of Ealing, incorporating the seven towns of Acton, Ealing, Greenford, Hanwell, Northolt, Perivale and Southall. The council now oversees an area with almost 340,000 people living in it – one of the largest populations in London.

This originally appeared in Around Ealing May 2013