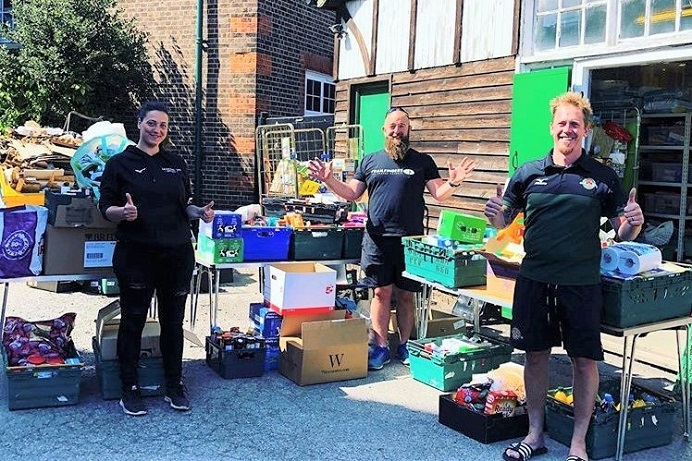 “The last few months have seen many people take a huge financial hit, many of whom were just about managing before. COVID-19 has tipped them over the edge and it can happen to anyone,” says Janet Fletcher, the manager of Ealing Foodbank.

And now, one of Ealing’s most well-known sports clubs, Ealing Trailfinders, is running a food drive to help the foodbank to meet the need in the community. Their aim is to collect food donations totalling one tonne or 1000kg.

Ealing Foodbank is part of the Ealing Together coalition of groups, charities, business and residents that have united to meet the needs of the community during COVID-19. Since the lockdown they have been feeding more people than ever. This April and May, they saw a 176% rise in referrals compared to the same two months last year- an increase in demand of more than double.

The food drive will take place on Wednesday, 17 June between 10am and 1pm at the Ealing Trailfinders sports ground in Vallis Way, W13, rain or shine. People can drive, cycle or walk and there is plenty of room in Trailfinders’ grounds to keep a social distance. People are asked to check the Ealing Foodbank’s monthly shopping list first.

“Lots of people are really struggling out there”

Janet continued: “The main reason people come to the foodbank is because they are on very low incomes. And with living and housing costs so high in Ealing, many people can get stuck in the system. Since COVID-19, we have seen a lot of new faces, many of whom might were on zero hours contracts, and who haven’t been furloughed or whose companies have closed. Lots of people are really struggling out there.

“The donations we have had so far have been incredible. During COVID-19 we have been able to get by on donations alone and have only recently had to top up by buying food ourselves. Our supporters are so generous.

“Our aim is to restore dignity and revive hope to the people that use our service. We talk to them as humans and ask them how they are doing and what they need. We see how relieved people are to receive the help and they walk away a bit taller. Everyone who takes part in the food drive will be helping us with this.”

This will be Ealing Trailfinder’s third event for the food bank.  Danny Harlow, head of community at Trailfinders explained: “With so many of our normal activities paused because of COVID-19, we wanted to do something for the community. And the one thing that people need more than anything right now is food. It’s the ultimate necessity and increasing numbers of people need help.

“At our first event, we collected 560kg of food. The second resulted in a 717kg collection. This time, we want to smash this target and collect 1000kg, or one tonne. Last month, Ealing Foodbank gave out 33 tonnes of food, so this will be like us sorting out roughly one day’s worth of food for them.”

“The community has come together”

Councillor Peter Mason said: “The last three months have sadly been a time of personal tragedy for many local people. They have also been a time of immense hope as the community has come together to take care of our friends and neighbours that need help. The demands on the foodbank have risen sharply over this time, but so has the response from local people.  It would be amazing if Ealing Trailfinders could hit their target. I know the community will get involved give generously.”

Danny continued: “The whole club has got behind these food drives including the professionals, amateurs, the minis section and the Ealing Trailfinders Cricket Club. The Ealing and Acton Whistlers Football Club have also played their part. We all want it to be a success. Please, if you are able, help the foodbank by donating whatever you can spare.”