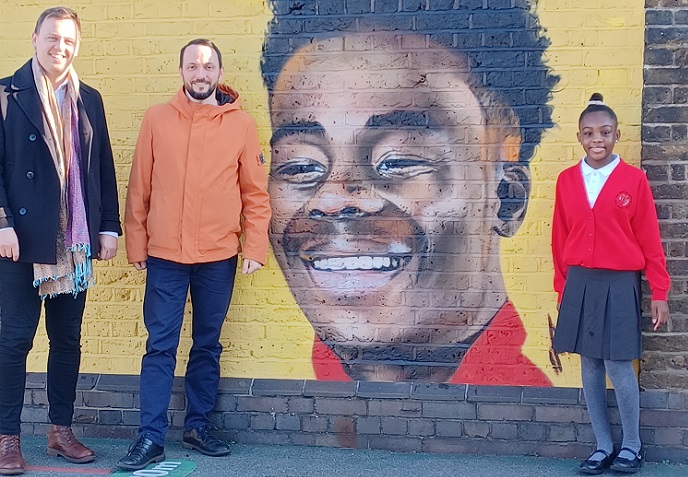 Peter Mason, leader of Ealing Council, visited Edward Betham Church of England Primary School this week to see for himself a mural of Arsenal and England football star, Bukayo Saka.

Bakayu was a former pupil of the school, where his talent with a football was recognised at the time.

Current pupil, Myla Clarke-Williams, aged 9, was so impressed with Bukayo and the way he handled social media abuse and racist insults following the Euro 2020 final, that she suggested a tribute was made and a mural of the former pupil was painted in the school.

The request went to the school governing body via the headteacher, Caroline Chamberlain, and Darek Urlewicz, a parent of a child at the school, was quickly approached to see if he would help.

Darek, a talented street artist, was only too happy to step forward and the result is an amazing mural for everyone to see and enjoy in the school playground.

Councillor Mason said: “Just a few short years ago, Bukayo Saka was a pupil at Edward Betham, playing football here, on the Brentside Playing Fields and then on the pitches at Greenford High.

“His is a remarkable story of talent and achievement that everyone can take hope, inspiration and encouragement from. And I feel sure that everyone at his former schools and across Ealing shares an incredible sense of pride in his achievements.

“The intolerant and racist abuse that he and other members of the England squad faced was totally unacceptable. Myla’s suggestion to honour Bukayo in this way, acknowledging not only his inspiration on the pitch, but also off the pitch shows a real maturity of thinking and I thank her for having such a wonderful idea and Darek for the skills to implement that idea.

“I’m delighted that the nomination of Bukayo to be the youngest ever recipient of the Freedom of the Borough has gone through and look forward to the day when he not only sees this amazing, larger than life depiction of himself, but also receives the honour from Ealing.”