Home > Bowie: A Starman in Acton 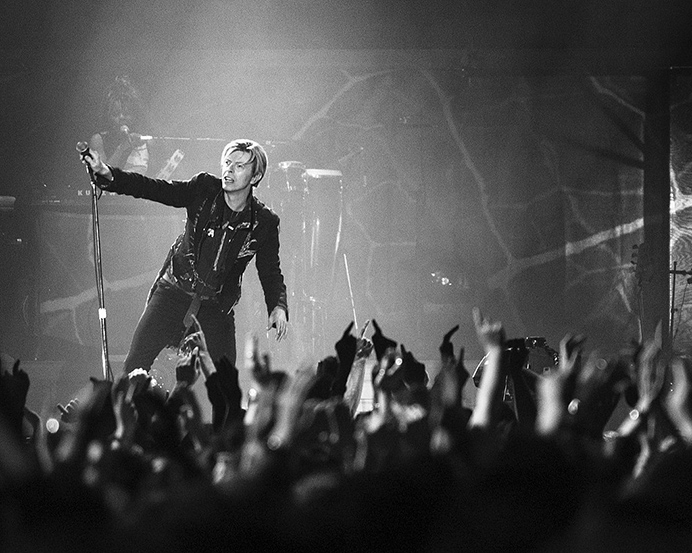 Bowie: A Starman in Acton

This month (10 January) will see the fifth anniversary of the death of David Bowie. He would have been 74 this year. Steven Mandich looked back at events that linked him to the borough in his early career as he rose to superstardom.

Bowie had changed his music business moniker from Davy Jones to David Bowie for his next borough appearance backed by The Buzz at The Starlite Ballroom, in Greenford, on 27 August 1966.

By 1969, David Bowie’s musical direction had shifted somewhat to a Dylanesque folksinger-songwriter type approach with occasional electric backing. This proved practicable at the time as it enabled him to arrange and self-book solo or duo bookings armed with just an acoustic guitar. Bowie, appeared with John Hutchinson at his next borough concert on 29 April 1969 – a lunchtime acoustic affair to a very small gathering at Ealing College of Technology, in St Mary’s Road, Ealing – earning the princely sum of £12.

In May 1969, Ken Pitt (Bowie’s manager at the time), negotiated a recording contract with Mercury / Philips UK record division. The first offering under the deal was a recording of the soon-to-be hit single, Space Oddity on 20 June 1969. The track featured Rick Wakeman on mellotron. Incidentally, the 1968 single I Found A New Love by US band The Tingling Mother’s Circus features a similar intro to that of Space Oddity.

A new confidence following the July 1969 moon landing gave cause for a lot of musicians to reflect and consolidate their position in readiness to break through commercially for the start of the coming decade. The first five months of 1970 saw David Bowie making several pivotal changes to pave the way for his future success. The arts lab appearances ceased, drummer John Cambridge was replaced by Mick ‘Woody’ Woodmansey, as was Ken Pitt by Tony Defries. Bowie also married Mary Angela Barnett (Angie Bowie) in March 1970.

From Space Oddity to Acton

Chiefly, from the mid-to-late 1960s, arts labs predominantly featuring folk music acts interspersed with poetry readings began springing-up rapidly in the hired function rooms of London’s pubs. In 1969, David Bowie started his own arts lab named Growth at the Three Tuns pub in Beckenham, and would perform there several times over the course of a year.

On 13 July 1970, Rick Wakeman and Colin Spiers started their folk and arts lab night Booze Droop inside the function room of the White Hart pub, in Acton High Street. The concept was to operate a non-profit night of entertainment. It certainly succeeded in that respect, because it struggled financially from the onset, having been allocated the worst night of the week – a Monday, which later changed to the only marginally better slot of Wednesday. Any surplus money at the end of an evening would be carried over to cover the following weeks’ entertainment costs.

The White Hart function room had a seated capacity of 80-100 people, and a maximum standing capacity of 250 people. Admission prices at the door were 50p for members and 60p for non-members. Club night attendee and guitarist Robert Hokum later became the founder of the Ealing Blues Festival. He shared his memories of the event: “It was held in a typical function room of the time,” he said. “With a stage at the back and windows directly opposite the stage. It was on the ground floor on the right of the building as you look at it. The Booze Droop had a typical young, student, folk club type audience. There were lots of young musicians learning their first chords and that was the days when there were ‘floor spots’, the equivalent of today’s ‘open mic’ night.”

The White Hart’s landlord-licensee, Patrick Taylor took over management of the pub in 1969, and experienced issues with his previous tenants. Acton Gazette and Post reported on 14 August 1969 that Clouds Discotheque nights opened at the White Hart on Wednesday 23 July 1969 and had ended by the following week. Poor attendances marred both nights, and a dispute over initial promotion between promoter and landlord created further tension. In addition, Taylor began objecting to some young members of the audience turning up ‘unwashed’, dressed in jeans, working clothes, and boots. Clouds organiser, Jeffrey Jukes claimed that Taylor would march around the discotheque with his dog and was not keen on the discotheque from the get-go.

More serious problems at the pub were revealed in the local weekly newspaper, Acton Gazette and Post (26 February 1970). Taylor had hired-out a room to a new set of tenants and given them ‘notice to quit’ on 1 August 1969. At the end of the following week’s disco, he decided to check-out the dancehall and became incensed at its state. He preceded to argue and physically attack the doorman, former boxer, Maurice Bush. During the Old Bailey Court case, Taylor argued in his defence that he had been initially provoked by Bush raising his fists first, which led to him launching a truncheon attack in response. Taylor admitted guilt of assault and was fined and ordered to pay costs. Maurice Bush would later make TV and film acting appearances in Dr Who, Return of The Jedi and The Empire Strikes Back.

Bowie steps in to help the Booze Droop

During a meal with David Bowie in July 1970, Rick Wakeman mentioned that his folk club (which had been running for two weeks) was not doing very well and that he owed the landlord £40. Bowie offered to help out by agreeing to perform an acoustic set on 27 July 1970 at 8pm for a nominal fee of £5. Despite an advert placed in the music newspaper Melody Maker, stating ‘scoop at Booze Droop’, very few people actually turned-up to see the show.

It is thought that there were only 12 people in the audience at the start because Bowie fans did not believe he would appear there. The numbers increased as word got around that he was actually there but, unfortunately, many of them arrived as he was just finishing his set – which amused Bowie.

It is rather difficult to gauge, or even speculate, what David Bowie’s acoustic set at the White Hart may have consisted of, as the material that he had been largely working on, notably the The Man Who Sold The World LP, was generally of a dark and doom-laden nature, and closely resembled the sound created by heavy rock contemporaries such as Black Sabbath, and Led Zeppelin.

At that time, it was not uncommon for unscrupulous promoters to dupe fans by falsely advertising popular acts to appear at venues. Fans would invariably attend the venue, only to find to their disappointment that the advertised singer or band had been unable to make it due to vehicular breakdown, delayed plane flights, or any other seemingly believable tale of dubious authenticity. They would then find the replacement act/s to be, more often than not, some unknown third-rate band or singer. Given the state of some of the clapped-out vehicles and the general condition of the UK road surfaces, these excuses could prove very convincing.

It is important to note that David Bowie, at this juncture, had become dissatisfied and somewhat disillusioned with the music industry, and was not particularly keen at the prospect of performing in front of live audiences. Having had a sole top five hit with Space Oddity, and little or no success with the attendant album or follow-up singles, he was now in danger of becoming a one-hit wonder. In fact, he was reluctant to perform Space Oddity for radio or live performance. Oddly enough, this short period of Bowie’s unorthodox lack of focus and direction, dovetailed perfectly with manager, Tony Defries’s desire and carefully planned strategy to mimic his hero, Colonel Tom Parker’s, success with Elvis Presley. Defries and Bowie patiently awaited an Essex Music publishing contract to lapse and refused to renew the Mercury Records deal. Bowie would soon become Elvis’s labelmate on RCA records (they also shared an 8 January birthday).

The Acton concert would be one of David Bowie’s last before a 10-month hiatus, which only ended after he was persuaded to perform a 5am set at Glastonbury Festival in June 1971. Songs were previewed from the upcoming Hunky Dory LP (which featured Rick Wakeman on the more complex piano pieces). Bowie gave a short, yet heartfelt, emotive speech to the audience declaring that he did not do live performances anymore because he was fed-up of dying a death. This appearance is widely regarded as the turning point in his career.

Soon after, Bowie (and his alter ego Ziggy Stardust) were to become world-famous titans of popular music.

All change as stars rise

The Booze Droop soldiered on for a further 10 months. Blues guitarist Robert Hokum appeared on 10 March 1971 as a member of a group called First Republic and returned two weeks later as a member of Granny Clegg’s Grunt Band to perform in front of audience of between 30-40 people. The Gazette covered this performance, highlighting the friendly atmosphere generated. It also praised the high standard of musicianship generally on show.

Robert reflected on how one of his bands got the gig: “Rick and I had some mutual acquaintances because he is a local lad and had been in a band with a school classmate of mine. We (Granny Clegg’s Grunt Band) were all in the same class as engineering students at Twickenham Tech and we’d seen ‘jug and skiffle’ bands playing the local folk clubs and decided to have a go ourselves. Then we hijacked some costumes from the drama department and it all got silly.”

According to some reports, David Bowie played on the last two shows at the Booze Droop. However, there is no evidence that bears this out. Robert Hokum performed on the closing night 19 May 1971 and recalled: “Rick Wakeman and I did a couple of songs together, Won’t You Come Home Bill Bailey and Bottle Up and Go. I have no recollection of who else played on the last night of the Booze Droop, except that David Bowie didn’t!”

Rick Wakeman’s star was rising during his tenure with folk-rock group The Strawbs and continued to do so after he joined the progressive rock group Yes in 1971. Aside from the severe financial difficulties that the club experienced, it became no longer realistic or practicable to dedicate time to the project due to the busy touring and recording schedule. Rick, however, would pay tribute to the Booze Droop and its members via an obituary advert placed in the Melody Maker and in a booklet attached to the Yes album, Fragile. Thanks was given to David Bowie and ‘ex members and performers at ‘Booze Proof’ (sic), White Hart, Acton.’

The White Hart still stands in its original location but is now called The Aeronaut in tribute to George Lee Temple (buried in Acton Cemetery), the first British pilot to fly upside down in the UK.

In 1972, another Bowie-related group, The Velvet Underground (Doug Yule’s) appeared in Acton promoting their Squeeze album, but that’s another story.

Since David Bowie’s passing from cancer in January 2016, Rick Wakeman has paid tribute by incorporating renditions of Life on Mars and Space Oddity into his concert performances.

With thanks to Robert Hokum for his contributions. Photo of David Bowie at top of article by Roger Woolman, via Wikimedia Commons.